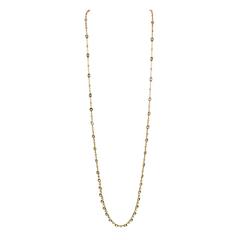 Art Nouveau Antique Russian Demantoid Gold Pendant
Located in Chicago, IL
Made in Moscow between 1908 and 1917. This large and elaborate antique pendant is crafted in rose and green 14K gold. The design of the openwork pendant combines floral and geometri...
Category

Diamond & Demantoid Art Nouveau Style Ring EGL Certified
Located in Southbury, CT
A 1.50-carat diamond and an over 2-carat demantoid garnet are the dazzling co-stars in this contemporary 14K yellow gold ring created in the style of the Russian Art Nouveau. The ve...
Category

Turn of the Century Demantoid Garnet and Diamond Bracelet

Art Nouveau Russian Demantoid Gold Bracelet
Located in Chicago, IL
made in Moscow between 1908 and 1917 A 14K greenish yellow gold bracelet with Art Nouveau style floral links is embellished with three demantoids. The round demantoid is ap...
Category

Art Nouveau Russian Demantoid Gold Brooch
Located in Chicago, IL
The brooch is designed as a flower in the Art Nouveau taste of the period, handcrafted in 14K rose gold, set with apple green Russian demantoid garnets from the Ural Mountains. Th...
Category

W 1.58 in.
Art Nouveau Russian Demantoid Ruby Gold Pendant
Located in Chicago, IL
Made in Moscow between 1908 and 1917 a 14K gold pendant of an openwork floral design set with Russian Uralian demantoids and natural rubies, marked on frame with 56 zolotnik gold ...
Category

Antique Demantoid Diamond Gold Art Nouveau Ring
Located in Chicago, IL
Made in Kazan between 1899 and 1908. The ring features an excellent sparkling green 0.77 ct demantoid garnet with a superb well-defined "horsetail" and is also set with an old Eur...
Category

W 2 in. in.
Antique Russian Demantoid Diamond Art Nouveau Ring
Located in Chicago, IL
Made in Moscow between 1908 and 1917. This 14K green and rose gold ring is designed as an Art Nouveau flower embellished with a sparkling old mine cut diamond and a golden green Russ...
Category

Free Shipping
H 0.83 in. W 1.78 in.
Art Nouveau Antique Russian Chrysolite Demantoid Gold Pendant
Located in Chicago, IL
Made in Moscow between 1908 and 1917 This elegant Art Nouveau era pendant is crafted in polished rose and matte greenish-yellow 14K gold. The pendant is embellished with golden-gree...
Category

Antique Art Nouveau Russian Demantoid Diamond Gold Ring
Located in Chicago, IL
Russian, made between 1899 and 1908 A 14k gold ring is designed as a stylized flower or a fly. The ring is set with one 1.22 ct Russian demantoid of excellent color and clarity, o...
Category

Art Nouveau Antique Russian Demantoid Garnet Gold Pendant
Located in Chicago, IL
Made in Moscow between 1899 and 1908 An antique 14K rose and green gold pendant is designed in Art Nouveau taste as a stylized flower. The pendant is embellished with sparkling brig...
Category

W 3 1/8 in. in.
Antique Art Nouveau Russian Demantoid Pearl Gold Bangle Bracelet
Located in Chicago, IL
Made in Moscow between 1899 and 1908 An antique polished 14K gold bangle bracelet is centered with a flower designed in Art Nouveau taste. The flower is embellished with sparkling R...
Category

Find the exact art nouveau demantoid you’re shopping for in the variety available on 1stDibs. Each design created in this style — which was crafted with great care and often made from Gold, 14k Gold and Yellow Gold — can elevate any look. You can easily find a 85 antique edition and 2 modern creations to choose from as well. You’re likely to find the perfect art nouveau demantoid among the distinctive items we have available, which includes versions made as long ago as the 19th Century as well as those produced as recently as the 21st Century. For this particular piece, 1 Carat and 1.5 Carat are consistently popular carat weights. Creating an art nouveau demantoid has been a part of the legacy of many jewelers, but those produced by Krementz & Co, Louis Comfort Tiffany and Riker Brothers are consistently popular. An art nouveau demantoid of any era or style can lend versatility to your look, but a version featuring Garnet, from our inventory of 44, is particularly popular. A round cut version of this piece has appeal, but there are also old mine cut and cabochon versions for sale. When shopping for an art nouveau demantoid, you’ll find that there are less available pieces for unisex or men today than there are for women.

How Much is a Art Nouveau Demantoid?

Prices for an art nouveau demantoid can differ depending upon size, time period and other attributes — at 1stDibs, these accessories begin at $495 and can go as high as $41,811, while this accessory, on average, fetches $4,200.

Art Nouveau — generally considered to have begun in the late 1800s and ended with the start of World War I — was a movement in the decorative arts that drew inspiration from natural forms, such as trees, flowers and, of course, the human figure. The three main themes present in Art Nouveau jewelry and watches were flora, fauna and women.

Art Nouveau, which reached its pinnacle in the year 1900, spawned from artists who rejected the historicism of their predecessors to create an entirely new visual vocabulary. As compared to Art Deco jewelry’s geometric patterns and sharp lines, the extravagant style of antique Art Nouveau jewelry is characterized by curvilinear forms and whiplash lines, vibrant materials and dramatic imagery.

The first art and design movement of the 20th century, Art Nouveau was also a reaction against the Industrial Revolution, and took its inspiration from the theories of the Symbolists, the art of the Pre-Raphaelites, the ideas of John Ruskin and his follower William Morris and, most importantly Japanese crafts. (The country was a fertile ground for inspiration after it was opened to the West in 1854.) The Art Nouveau style touched all manners of the arts, including the most exultant jewelry.

Nature was a favorite muse for artists going back to the 18th and 19th centuries, but in the hands of 20th-century artists, it was depicted in new ways. For example, a withering flower was considered just as beautiful as one in full bloom. Winged creatures, such as insects and birds, were also a popular subject. Dragonflies and butterflies were particular favorites because they morphed so dramatically in different life stages.

This was also a reference to women, whose role in society was evolving. It was not uncommon to see a piece of jewelry that would at once reference a woman as a winged creature (think René Lalique’s famous Dragonfly brooch, circa 1897–98, at the Gulbenkian Collection in Lisbon). However, just as women’s roles were ambiguous, so was their image, as the femmes nouvelle were simultaneously eroticized and romanticized.

Art Nouveau jewelers used every “canvas” imaginable, looking beyond brooches and necklaces to belt buckles, fans, tiaras, dog collars (a type of choker necklace), pocket watches, corsages and hair combs. Multicolored gems and enamel could complete this vision better than diamonds. Jewelers also favored pearls, particularly baroque pearls, for their large size and irregular shape. However, opal was the most popular stone — its iridescence harmonized perfectly with the enamel, and it could be carved into any shape. Art Nouveau jewelry was primarily set in yellow gold.