Dm 66.93 in.
Rugs
By Andy Warhol
Located in Los Angeles, CA
This work is unique. Work comes with a Certificate of Provenance. Stamped on the verso by the Estate of the Artist and The Andy Warhol Foundation for the Visual Arts. Foundation numb...
Category 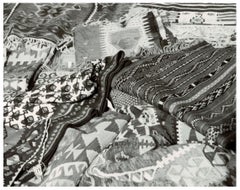 W 66 in. L 108 in.
Vintage Kilim Rug in Salt and Pepper White and Black, Panel Woven
Located in Long Island City, NY
From the coveted curations of Rug & Kilim, a vintage 9x12 flat weave connoting a panel woven style from Turkey—circa 1950-1960. While a subdued look, the colorway revels in a sal...
Category

W 72 in. L 150 in.
Vintage White and Black Beni Ouarain Berber Moroccan Rug
Located in Milan, IT
The Beni Ouarain confederation is composed of seventeen tribes inhabiting the high mountain region of the northeastern Middle Atlas. Their rugs differ from other Berber weavings in t...
Category

W 78.75 in. L 122.05 in.
Handmade Oriental Turkish Carpets, Vintage Grey Tree, Black and White Area Rug
Located in Hampshire, GB
This oriental Turkish carpet is a handmade oriental rug coloured in different shades of black, white and grey. This traditional rug would be suited as a wall rug or placed on a wall ...
Category

W 97 in. L 153 in.
Vintage Purple Moroccan Rug, Black and White Diamond Field and Accents
Located in New York, NY
The purple and red field abrashes from lighter to more saturated, and shows six rows of flattened lozenges, and several additional rows of four or more flattened lozenges. There are ...
Category

W 113 in. L 156 in.
Midcentury Handmade Persian Tribal Kilim Rug in White, Black and Red
Located in New York, NY
A vintage Persian tribal flat-weave Kilim rug handmade during the mid-20th century with an ivory-white field with black serrated triangles to the side. The end borders showcase more ...
Category

W 45 in. L 50 in.
Antique Persian Turkmen Rug with Black and White Diamond Patterns on Red Field
Located in Dallas, TX
Antique Persian rug handwoven from the finest sheep’s wool and colored with all-natural vegetable dyes that are safe for humans and pets. It’s a traditional Turkmen design featuring ...
Category

W 64 in. L 120 in.
Vintage Mid-Century Tapestry Rug in Red, White and Black Geometric Pattern
Located in Long Island City, NY
Handwoven in wool circa 1950-1960, this vintage tapestry is a one-of-a-kind Mid-Century Modern creation in bold color and artisan design alike. The play of the positive-negative elem...
Category

W 33 in. L 118 in.
1950s Vintage Tribal Rug in White and Black with Multi Hued Geometric Patterns
Located in Long Island City, NY
Originating from Turkey circa 1950-1960, a fabulously rare mid-century rug from our principal’s newest line of vintage carpets. Bearing the most unusually bright and refreshing c...
Category

W 57 in. L 106 in.
Vintage Moroccan Azilal Rug in White/Cream and Black for Modern Interiors
Located in Atlanta, GA
Measures: 4'6'' x 9'9''. This exquisite piece features a graphic handwoven Berber design with randomly drawn highlights, this piece is packed with motifs and symbols. The white or iv...
Category

W 67 in. L 146 in.
Vintage White/Black Moroccan Berber Beni Ouarain Rug
Located in Milan, IT
The Beni Ouarain confederation is composed of seventeen tribes inhabiting the high mountain region of the northeastern Middle Atlas. Their rugs differ from other Berber weavings in t...
Category

W 70 in. L 146 in.
6.3x9.8 Ft Banded Vintage Anatolian Kilim Rug in Red, Orange, Black & White Wool
Located in Philadelphia, PA
This authentic handwoven flat-weave (Kilim) from Central Turkey was made by Nomads to be used as a floor covering in their tents or summer houses circa mid-20th century. It is made o...
Category

W 33 in. L 52 in.
Vintage Navajo Rug with All over Geometric in Gray, Red, Black and Cream
Located in Atlanta, GA
This intriguing vintage Navajo rug was woven by Navajo tribes during the first half of the 20th century. The exciting and unique composition boasts a captivating geometric compositio...
Category

Vintage Navajo Rug with All over Geometric in Gray, Red, Black and Cream

Black And White Vintage Rug For Sale on 1stDibs

How Much is a Black And White Vintage Rug?

Prices for a black and white vintage rug can differ depending upon size, time period and other attributes — at 1stDibs, they begin at $139 and can go as high as $21,000, while the average can fetch as much as $2,500.