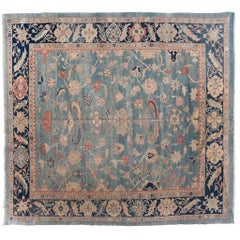 W 124 in. L 138 in.
Modern Turkish Beige and Blue Kilim Rug
By Rug & Kilim
Located in Long Island City, NY
Originating from Turkey, this modern wool Kilim rug is of a unique family of Turkish and Persian pieces woven in vertical panels, though it is rare even among this select family to s...
Category

W 116 in. L 160 in.
Wild Blue Vintage Turkish Mohair Rug
Located in New York, NY
A mid-20th century one of a kind Turkish sirt rug woven with Mohair wool. The piece has been over-dyed giving it a wild ethereal feel to it. These pieces are inspired by traditional ...
Category

W 84 in. L 122 in.
Angora Turkish Oushak Rug in Blue
By Keivan Woven Arts
Located in Atlanta, GA
Blue Angora Oushak rug from Turkey, rug an-134596, country of origin / type: Turkey / Angora Oushak. From our Angora collection, this piece is made with a combination of angora and ...
Category

W 63 in. L 101 in.
Turkish Blue Accent Rug Mat
Located in New York, NY
A one of a kind vintage Turkish rug with a deep blue accent you don't typically find in older Turkish rugs.
Category

W 113 in. L 142 in.
Vintage Wool Turkish Rug in Blue Tones
Located in Brea, CA
Vintage Turkish rug. The warm colors as well as intricate patterns not only add character but also make the rug a one of a kind. Some pattern and color variation with vintage items i...
Category

W 24 in. L 46 in.
Vintage Turkish Rug in Brown and Blue
Located in Brea, CA
Drake II vintage Turkish rug. The warm colors as well as intricate patterns not only add character but also make the rug a one of a kind. Some pattern and color variation with vintag...
Category

W 123 in. L 143 in.
Room-Size Vintage Hand Knotted Red and Blue Turkish Rug with Soft Wool Pile
Located in Philadelphia, PA
This room-size hand knotted vintage Turkish rug has at its center a prominent lozenge-shaped medallion in ivory that features scalloped edges and is decorated with free floating flor...
Category

W 47 in. L 82 in.
Vintage Turkish Oushak Rug with Green, Blue & Red
By Keivan Woven Arts
Located in Atlanta, GA
With light blue and green as its prominent background and red in the border, this beautiful Oushak displays various hues throughout the field. The central field consists of branches ...
Category

W 156 in. L 110 in.
Vintage Turkish Oushak Rug in Cream and Blue
Located in Atlanta, GA
Handwoven in Turkey, this vintage Oushak rug features a large-scale medallion and floral bouquets. The butter yellow background is elegantly decorated by a variety of medium blue col...
Category

W 72 in. L 144 in.
Large Modern Oushak Turkish Rug Over-Dyed in Blue Shades
By Keivan Woven Arts
Located in Atlanta, GA
This modern Turkish carpet with a classical composition has been over-dyed with blue, light blue pigments. With both classic and contemporary characteristics, this beautiful carpet c...
Category

W 123 in. L 199 in.
Turkish Hand Knotted Rug Over-Dyed in Soft Cerulean Blue
Located in Philadelphia, PA
This hand knotted Turkish rug was originally made in the 1960s. It is over-dyed in soft cerulean blue and has low wool pile on cotton foundation. It is very sturdy, clean and in good...
Category

W 63 in. L 108 in.
Anogra Turkish Oushak Rug in Light Blue and Red
By Keivan Woven Arts
Located in Atlanta, GA
From our Angora collection, this piece is made with a combination of angora and old wool. Featuring all organic materials, the Angora collection is a modern-day remake of antique Tur...
Category

W 71 in. L 102 in.
Turkish Kilim Runner Rug with Blue and Orange Stripes
Located in Dallas, TX
Turkish rug handwoven from the finest sheep’s wool and colored with all-natural vegetable dyes that are safe for humans and pets. It’s a traditional Kilim flat-weave design featuring...
Category

W 100 in. L 147 in.
Vintage Turkish Blue and Peach Rug Pillow
Located in New York, NY
Pillow made from a vintage Turkish Oushak rug in blues and peach.
Category

How Much are Blue Turkish Rug?