H 30 in. W 41.38 in. D 19.75 in.
Brass and Marble Console
By Officina Ciani
Located in Milan, IT
Mostly Minimalist with a surprising finishing touch, this regal console from Officina Ciani is the perfect addition to any entryway that is eager to impress. Topped in luxurious Port...
Category 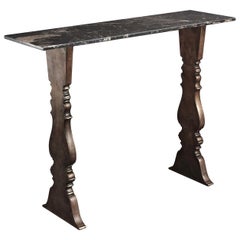 H 41.34 in. W 47.25 in. D 13.78 in.
Italian Console in Brass and Carrara Marble Top
Located in London, GB
This 1960s Italian console has a brass structure with horn of plenty and heraldic motif. The top is in Carrara marble.
Category

H 34.26 in. W 43.31 in. D 13.59 in.
1950s Italian Black Laquered Console with Marble Top and Brass Drawer
Located in Rome, IT
Elegant and modern midcentury console table with drawer. Manufactured in Italy during the 1950s. Made of very black lacquered wood, brass drawer and Portugal marble top. We have c...
Category

H 34.26 in. W 41.74 in. D 13.78 in.
Vintage Walnut Console with a Portuguese Pink Marble Top and Brass Frame, Italy
Located in Bresso, Lombardy
Made in Italy, 1950s. This console table features a Portuguese pink marble top and a brass and walnut frame. It is a vintage item, therefore it might show slight traces of use, bu...
Category

H 32.29 in. W 47.05 in. D 11.03 in.
Mid-Century Modern Italian Brass Horses and Marble bases Console Table, 1970s
Located in Puglia, Puglia
Beautiful console table depicting sculptures of a pair of rampant horses in solid brass, the bases are in black marble and the top in thick glass. Italian production of the 70s. It ...
Category

H 33.47 in. W 35.24 in. D 9.06 in.
Marble Glass and Brass Artedi Console Table Ca. 1980's Made in Italy
By Artedi
Located in New York, NY
Chic Artedi console table, in very clean, original ready to use condition. The base is a rectangular marble, with two horizontal brass supports and an unusual plate glass oval top. T...
Category

H 30 in. W 63 in. D 13 in.
Pair Black and Grey St. Laurent Marble and Oxidized Brass Consoles, Italy 2022
Located in New York, NY
One of a kind pair of Saint Laurent black and grey with White Veins marble Consoles Tables. Oval-shaped, polished marble slabs sit atop geometric bases that are set in an asymmetrica...
Category

H 31.75 in. W 59.25 in. D 24 in.
Late 20th Century Pair of Italian Black "Vulcano" Marble & Etched Brass Consoles
Located in Firenze, Tuscany
Easy to transport because the console is made of three indipendent pieces. The two triangular legs are supporting the marble top easily.
Category

H 33.46 in. W 51.18 in. D 15 in.
Vintage Wall Mirror and Console with a Marble Top and Cast Brass Frame, Italy
Located in Bresso, Lombardy
Italy, 1960s. The console table features a Portuguese pink marble top and both the mirror and the console have a cast brass frame. They might show slight traces of use since they a...
Category

H 35.04 in. W 36.23 in. D 12.6 in.
Italian Console in Mahogany Brass and Portoro Black and Gold Marble Paolo Buffa
By Paolo Buffa
Located in Palermo, Sicily
Very elegant and great class console, it is fixed to the wall with a hook in the back, top quality Portoro marble, 100% Italian design.
Category

H 35.44 in. W 57.88 in. D 13.78 in.
Midcentury Marble Brass and Glass Console Table, 1980
Located in Rome, IT
Stylish and refined pair of consoles, both for their design and for the particular pleasant marriage of three materials such as black marble, brass and glass. The consoles are compo...
Category

H 32.29 in. W 59.45 in. D 18.12 in.
Console In Brozed Brass Top in Black Aziz Marble or Calacatta Gold Marble
By sicis
Located in London, GB
Sicis is delighted to welcome you at ‘Home’. The classically inspired extent in contemporary plays an eclectic style, elegant and refined. Interiors express personality. A constant...
Category

H 33.08 in. W 79.53 in. D 18.51 in.
The Collision Console Carrara Marble and Brushed Brass, Onyx, by Lara Bohinc
By Lara Bohinc
Located in London, GB
Inspired by the planets and their orbital movements, a recurrent theme in Lara Bohinc’s work, the Lunar Collection features important pieces of furniture, with highly-figured marbles...
Category

H 39.6 in. W 52.25 in. D 13.75 in.
The Collision Console Carrara Marble and Brushed Brass, Viola, by Lara Bohinc
By Lara Bohinc
Located in London, GB
Inspired by the planets and their orbital movements, a recurrent theme in Lara Bohinc’s work, the Lunar Collection features important pieces of furniture, with highly-figured marbles...
Category

H 35.04 in. W 47.64 in. D 11.03 in.
The Collision Console Carrara Marble and Brushed Brass, Snow, by Lara Bohinc
By Lara Bohinc
Located in London, GB
Inspired by the planets and their orbital movements, a recurrent theme in Lara Bohinc’s work, the Lunar Collection features important pieces of furniture, with highly-figured marbles...
Category

H 35.44 in. W 70.87 in. D 15.75 in.
Vintage Ebonized Beech Console Table with Portuguese Pink Marble Top, Italy
Located in Bresso, Lombardy
Italy, 1950s. It features an ebonized beech frame, brass parts and feet caps and a Portuguese pink marble top. It might show slight traces of use since it's vintage, but it can be ...
Category

H 35.44 in. W 59.06 in. D 15.75 in.
Italian Half Moon Design Wrought Iron Console Tables with Griffin and Marble Top
Located in Firenze, IT
This early 20th century chic pair of Italian half moon design console tables are very interesting, extremely detailed and well proportioned. The X-shaped stretcher structure is made...
Category

H 34.25 in. W 23.25 in. D 10.25 in.
Entryway Mirror & Console M06 Contemporary Walnut Oak Brass Marble Made in Italy
By 2K1M
Located in Toronto, CA
This elegant and unique crafted Entryway Mirror, from the "Fai" Collection. Made in Italy and designed by Naji Mourani. A one of a kind contemporary piece of furniture for your entry...
Category

H 28.7 in. W 39.3 in. D 19.6 in.
The Collision Console Travertine and Brushed Brass, by Lara Bohinc
By Lara Bohinc
Located in London, GB
Inspired by the planets and their orbital movements, a recurrent theme in Lara Bohinc’s work, the Lunar Collection features important pieces of furniture, with highly-figured marbles...
Category

The Collision Console Travertine and Brushed Brass, by Lara Bohinc

H 33.47 in. W 33.47 in. D 13.78 in.
Console & Mirror in Inlaid Walnut with Brass Hardware, Set of 2
Located in Montelabbate, PU
Prestigious console table with mirror in solid walnut and walnut panelling, on the front it has 2 finely carved swans, inlays and brass hardware. The top is in white marble. Excellen...
Category

Console & Mirror in Inlaid Walnut with Brass Hardware, Set of 2

H 92.13 in. W 52.76 in. D 24.02 in.
Mid-Century Itaian Neo-Classical Style Giltwood And Marble Top Console Table
Located in Kennesaw, GA
This is an amazing piece! It is an Italian neo-classical style mahogany , giltwood and marble top console table. The beautiful mahogany is banded with kingwood. The ebonized appointm...
Category

H 36.5 in. W 108 in. D 12 in.
Moser Console
By Arte Veneziana, Giovanni Luca Ferreri
Located in Milan, IT
Part of the Moser series, this elegant console has a structure in wood with a black polish. Its simple and elegant silhouette is covered on its sides and legs with a series of mirror...
Category

H 35.44 in. W 59.06 in. D 17.33 in.
Karl Springer Era Tasselated Travertine Marble Console Sofa Table, Circa 1980s
By Karl Springer
Located in Swedesboro, NJ
This is a beautiful brass inlaid table that most likely was made by Karl Springer. The table is in excellent condition and has no issues. The table measures 56 wide x 16 deep x 27 in...
Category

How Much is a Brass Marble Console Italy?