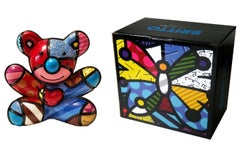 H 5.8 in. W 5.8 in.
LOVE BEAR
By Romero Britto
Located in Aventura, FL
Poly resin sculpture. Britto signature stamped on lower right. From the edition of 4000 (2nd edition). Comes in original box. Certificate of authenticity issued by our gallery is...
Category

Britto Bear For Sale on 1stDibs

You are likely to find exactly the britto bear you’re looking for on 1stDibs, as there is a broad range for sale. On 1stDibs, the right britto bear is waiting for you and the choices span a range of colors that includes black. Frequently made by artists working in organic material, plastic and polymer, these artworks are unique and have attracted attention over the years. If space is limited, you can find a small britto bear measuring 5.8 high and 5.8 wide, while our inventory also includes works up to 5.8 across to better suit those in the market for a large britto bear.

How Much is a Britto Bear?

The price for an artwork of this kind can differ depending upon size, time period and other attributes — a britto bear in our inventory may begin at $160 and can go as high as $350, while the average can fetch as much as $200.