H 7.88 in. Dm 31.5 in.
6-Arm 12-Light Chrome Spoke Chandelier
By Lightolier
Located in New York, NY
Mod chrome spoke form chandelier having 6 up lights and 6 down. The chandelier can be used with all 12 bulbs or top or bottom only. Total height without chain 18 inch x 32 inch with ...
Category

H 25.5 in. W 19 in. D 19 in.
Mid-Century Modern Czech Bohemian 12-Arm Chandelier
Located in Port Jervis, NY
Beautiful and Classic in style 12-arm glass with brass accents chandelier. Elegant and simple 2 tiers of lighting, 4 up top and 8 below. 3 bob.
Category

H 32 in. Dm 32.5 in.
Venini Porpora 12-Arm Glass Chandelier in Clear
By Venini
Located in New York, NY
Porpora glass chandelier, designed and manufactured by Venini, is available in 4 different versions with up to 12 arms. Originally designed in 1924. Indoor use only. Dimensions: Ø...
Category 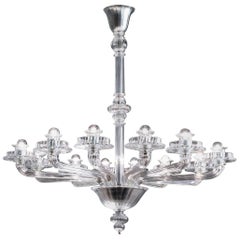 H 45.67 in. Dm 27.56 in.
Barovier & Toso 12-Arm Chandelier with Gold Inclusions
By Venini, Ercole Barovier
Located in London, GB
Exquisite and excellent quality chandelier by Barovier & Toso Blown Murano glass with gold inclusions. Italy, circa 1949 The chandelier has been re wired for Europe and the ...
Category

H 24 in. Dm 21 in.
Brass 12-Arm Chandelier by Gaetano Sciolari, Italy, 1960s
By Gaetano Sciolari
Located in Hagenbach, DE
An extraordinary Sciolari chandelier made in Italy in the 1960s. It is fascinating with its 12 amazing arms. The body is made of full brass and has a very elegant style. The ligh...
Category

H 27 in. W 26 in. D 26 in.
Poppy V. Floral 12-arm Chandelier in Lost Wax Cast Brass
By Fred&Juul
Located in Fiesole, Florence
Combining stems that carry the blooming buds, from a couple that looks simply poetic, up to a whole bouquet that appears extravagantly scenic. Lost wax cast by master craftsmen in Tu...
Category

H 5.91 in. Dm 3.94 in.
Leucos Multi-Color Gio Ponti 12-Arm Chandelier by Venini
By Leucos Design Lab
Located in Edison, NJ
The Gio Ponti chandelier line was debuted by Venini in 1946. The spirits of Venini’s unmistakable identity have always been imprinted upon my memory. When I work for this noble compa...
Category

H 32.7 in. Dm 34.6 in.
Italian Midcentury Brass 12-Arm Sputnik Chandelier Arredoluce Attributed, 1950s
Located in Hagenbach, DE
A colorful Sputnik chandelier attributed to Arredoluce and made in Italy in the 1950s. It is fascinating with its twelve brass arms, each of it with an E14 light bulb. The shape of t...
Category

H 25.2 in. Dm 22.45 in.
Large Midcentury Brass 12-Arm Sputnik Chandelier by Kalmar, 1950s
By J.T. Kalmar
Located in Hagenbach, DE
A Sputnik chandelier made in Germany in the 1950s. It is fascinating with its twelve brass arms, each of it with an E14 light bulb. The shape of the light is similar to a spider. ...
Category

H 21.66 in. Dm 14.57 in.
French Empire Gilded Bronze Crystal 12-Arm Chandelier Light Fixture
Located in Toledo, OH
A gorgeous large scale French Empire crystal chandelier. The body of this chandelier is done in gilded bronze and has two layers of arms for a total of 12 arms. Arms are scrolled and...
Category

H 47.25 in. Dm 36.23 in.
Venini Gio Ponti 12-Arm Chandelier in Multicolor by Gio Ponti
By Venini, Gio Ponti
Located in New York, NY
99.80 Gio Ponti glass chandelier, designed by Gio Ponti and manufactured by Venini, is one of the most innovative chandeliers ever to emerge from Murano. Designed in 1946, its transp...
Category

H 31 in. W 23 in. D 23 in.
Mid-Century Modern Sciolari 12-Arm Chrome Chandelier Light Fixture Italian 1970s
By Gaetano Sciolari
Located in Keego Harbor, MI
For your consideration is a complex yet chic, chrome chandelier by Gaetano Sciolari, circa 1960s-1970s. In excellent condition. The dimensions are 21" diameter x 45" height.
Category

H 32.25 in. Dm 29.5 in.
Large Gothic / Rococo Bronze Six-Arm 12-Light Chandelier with Mythical Bird
Located in Toledo, OH
A stunning large-scale bronze with a gold doré finish chandelier. It features six arms with a total of 12 lights. Each scroll arm has a mythical winged bird and grape detail. It has ...
Category

H 36 in. Dm 28 in.
Rare 12-Arm Murano Glass Fixture
Located in Tarrytown, NY
Its rare to see so many arms on a fixture this size. Murano glass fixture from the 1970s.
Category

H 21 in. Dm 22 in.
1930s Large Scale Palace Theater 12-Arm Crystal Basket Chandelier with 30 Lights
Located in New York, NY
Impressive large scale crystal basket chandelier from the 1930s. There are 12 candlestick arms outside and 18 bulbs on the interior, with 30 lights total. Form The Palace Theater in ...
Category

H 21.66 in. Dm 33.47 in.
Mid-Century Modern Handblown Murano Periwinkle Glass and Chrome 12 Arm Sputnik
Located in New York, NY
This stunning and graphic sputnik was realized in Italy, circa 1950. It features twelve torus shaped shades in handblown Murano glass of a beautiful periwinkle shade- replete with an...
Category

H 48 in. Dm 22 in.
Mid-Century Modern Hand Blown Murano Periwinkle Glass and Chrome 12 Arm Sputnik
Located in New York, NY
This stunning and graphic sputnik was realized in Italy, circa 1950. It features twelve torus shaped shades in hand blown Murano glass of a beautiful periwinkle shade- replete with a...
Category

H 48 in. Dm 22 in.
Midcentury Two-Tier Brass 12-Arm Sputnik Chandelier, 1960s
By Sciolari Lighting
Located in Hagenbach, DE
A midcentury chandelier made in Germany in the 1960s. It is fascinating with its twelve brass arms, each of it with an E14 light bulb. The body is also made of full brass. The shape ...
Category

H 32 in. Dm 16 in.
A 12-arm Column Chandelier
Located in Atlanta, GA
An Antique Four-Post Italian Bed made into a 12-arm chandelier. This chandelier is composed of 20th C. and 21st C. elements This item is not wired, making it easier to ship as the ...
Category

H 18 in. Dm 30.5 in.
12 ARM BOHEMIAN GLASS CHANDELIER
Located in New York, NY
Elegant Glass Chandelier with each Bobeche having a gold leaved stripe around it. 2 Tiers, 12 lights
Category

H 36 in. Dm 25 in.
12 Arm Bohemian Glass Chandelier
Located in New York, NY
Elegant and Classic Chandelier with Clear Glass and Clean Lines that Bridges the Gap between Traditional and Modern. There are 12 Arms that Span Over a 32" Diameter and Provide a Lux...
Category

H 28 in. Dm 27 in.
A 12 Arm Sculptural Chandelier by Lightolier
Located in Los Angeles, CA
circa 1960's<br /> Beautiful twelve arm Chandelier, in polished nickel by Lightolier. <br /> This chandelier was made in Germany in the early 60's and still is in very good conditi...
Category

A 12 Arm Sculptural Chandelier by Lightolier

H 29.5 in. W 35 in. D 35 in.
12 Arm Cut Glass Sputnik Chandelier
Located in New York, NY
This 12 arm polished chrome sputnik holds the cut glass globes which conceal each light source and is suspended by a centre rod that can be adjusted to the desired length
Category

Chandelier 12 Arm For Sale on 1stDibs

How Much is a Chandelier 12 Arm?

A chandelier 12 arm can differ in price owing to various characteristics — the average selling price 1stDibs is $4,613, while the lowest priced sells for $773 and the highest can go for as much as $164,214.