H 17 in. W 58.5 in. D 19 in.
Plot Coffee Table in Teak with Cane Webbing Under a Tempered Glass Top
Located in Miami, FL
Clean and soft shaping. Inspired by a vintage style, its structure is made of solid teak with a cane top covered by a colorless tempered glass top.
Category 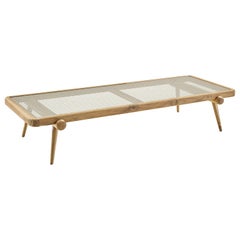 H 15 in. W 36 in. D 36 in.
Large Jacaranda Coffee Table by Percival Lafer with Glass Top, 1960s
Located in Budapest, HU
Designed by Percival Lafer, this table is marked and manufactured in Brazil during the 1960s. The table made of rosewood, teak, and jacaranda. It has a thick glass top the table is i...
Category

H 18 in. W 63 in. D 43.25 in.
Round Glass Top Coffee Table With Sculpted Cruciform Teak Base
Located in Chicago, IL
Sculpted teak X-base coffee table. Thick solid teak wood is sculpted with a center that rises up off the ground at it's cross section. Each of the four legs curve as if they were the...
Category

Round Glass Top Coffee Table With Sculpted Cruciform Teak Base

H 13 in. Dm 48 in.
Oval Astro Teak Coffee Table with Glass Top by G-Plan
By G Plan Furniture
Located in Madrid, ES
Oval teak "Astro" coffee table with glass top produced by G-Plan in England, circa 1960s. Some age-related wear on the frame on top, which can be restored if requested.
Category

H 16 in. W 57.5 in. L 16 in.
Low Table in Teak with Glass Top
By Christian Linnebergs Møbelfabrik
Located in Lejre, DK
Low table - Teak frame with a top in glass - Designed by Christian Linnebjerg Denmark in the 1960s - great condition.
Category

H 16 in. W 49.75 in. D 19.25 in.
Mid-Century Teak and Ebonized Coffee Table with Ceramic Inset
Located in Troy, MI
Found in Belgium, this Scandinavian Mid-Century coffee or cocktail table is made of teak with contrasting ebonised legs. Legs on one side are set at an angle and the lower shelf is f...
Category

Coffe Table Teak With Glass For Sale on 1stDibs

How Much is a Coffe Table Teak With Glass?

Prices for a piece of coffe table teak with glass can differ depending upon size, time period and other attributes — at 1stDibs, they begin at $1,058 and can go as high as $5,650, while the average can fetch as much as $1,720.