H 31 in. W 33.25 in. D 17 in.
Custom English Mahogany Demilune / Console
Located in Woodbury, CT
This inlaid demilune / console features a radial top with satinwood crossbanding and ebony stringing. A central fan medallion of satinwood offers a fitting balance to the outside ban...
Category

H 28.5 in. W 35.5 in. D 18 in.
Demilune Console
By Arcahorn Srl.
Located in Milan, IT
This refined demilune console table is a great addition to any interior where it can be placed against a wall or behind a sofa, blending gracefully with both modern and classic style...
Category 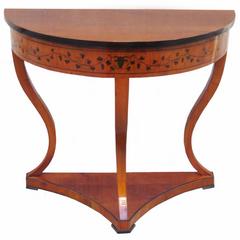 H 13 in. W 28 in. D 14 in.
54"W Hickory Demilune Console Entry Table
By HBF
Located in Pasadena, TX
Demilune console entry table by Hickory Neoclassical elements are combined with a combination of rich woods in this space saving entry or side table.
Category

H 30.25 in. W 40 in. D 17 in.
Painted Marble-Top Demilune Console Table
Located in Wilson, NC
This painted demilune console table has a white marble top that is a later replacement. The edge has an ogee shape. The apron is painted with stylized bellflower swags. The center su...
Category

H 29.25 in. W 43.5 in. D 20.75 in.
Italian Demilune Consoles
Located in Stamford, CT
Pair of 19th century faux painted and gilded Venetian consoles. The apron and legs are curved and carved.
Category

H 32 in. W 51 in. D 20 in.
Pair Adams Style Inlaid Carved Walnut Maitland Smith Demilune Console Tables
By Maitland Smith
Located in Swedesboro, NJ
This is a spectacular pair of inlaid Maitland Smith demilune consoles. They are made of mixed woods with beautifully inlaid tops of walnut and satinwood. They are Inlaid. Banded. Pai...
Category

H 34 in. W 56 in. D 22 in.
Custom English Walnut Demilune / Console
Located in Woodbury, CT
Veneered in the finest walnut burl, this demilune / console has straight-grain crossbanding and inlays of satinwood. The lightly tapered legs are a Classic look, but allow this table...
Category

H 35 in. W 52 in. D 21 in.
Custom English Satinwood Demilune / Console
Located in Woodbury, CT
Handmade for us by our English craftsmen, this little demilune / console shines with the reflective qualities inherent in satinwood. Light dances off the grain and gives the surface ...
Category

H 30 in. W 36 in. D 18 in.
English Demilune Console Table
Located in Wilson, NC
The top of this console table is mahogany with a natural finish. The apron and legs are painted with floral designs on a black background framed with painted gold lines at the edges ...
Category

Demilune Console For Sale on 1stDibs

Choose from an assortment of styles, material and more with respect to the demilune console you’re looking for at 1stDibs. Each demilune console for sale was constructed with extraordinary care, often using wood, stone and metal. Find 1068 options for an antique or vintage demilune console now, or shop our selection of 21 modern versions for a more contemporary example of this long-cherished piece. Your living room may not be complete without a demilune console — find older editions for sale from the 18th Century and newer versions made as recently as the 21st Century. A demilune console made by Louis XVI designers — as well as those associated with Neoclassical — is very popular. A well-made demilune console has long been a part of the offerings for many furniture designers and manufacturers, but those produced by Maison Jansen, Maitland Smith and Baker Furniture Company are consistently popular.

How Much is a Demilune Console?

Prices for a demilune console can differ depending upon size, time period and other attributes — at 1stDibs, they begin at $297 and can go as high as $125,000, while the average can fetch as much as $3,850.