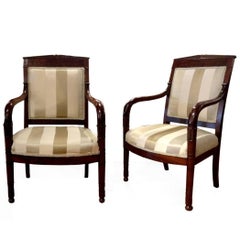 H 36 in. W 23 in. D 21 in.
Pair of French Empire Fauteuils in Mahogany with Bronze Doré Ormolu, circa 1810
Located in Miami, FL
An exquisite pair of Empire armchairs/ fauteuils in fine mahogany with bronze dore´ ormolu mounts decorating the upper crest and lower back splat, with rosettes and palmettes on legs...
Category

Pair of French Empire Fauteuils in Mahogany with Bronze Doré Ormolu, circa 1810

H 39.25 in. W 26.5 in. D 27 in.
French 19th Century Second Empire Painted Fauteuil
Located in Baton Rouge, LA
This delightful Second Empire carved and painted fauteuil, circa 1870 is from France. The frame is painted grey with pale French-blue highlights and retains the original slate-blue v...
Category

Pair of Empire design Fauteuils in Mahogany, France, circa 1880

H 34 in. W 25 in. D 21 in.
Pair of Empire Period Mahogany Fauteuils, France ca. 1810-20
Located in Atlanta, GA
A pair of Empire Period French carved mahogany fauteuils from the early 19th century. Each with a rectangular padded back with downcurved reeded arms, the bow front upholstered seat...
Category

Pair of Empire Mahogany Fauteuils, in the Manner of Pierre Bellange

H 37 in. W 25 in. D 29 in.
Empire Style Mahogany Library Tub Fauteuil de Bureau or Desk Chair
Located in Nashville, TN
Of generous proportions and presence . The front mounted with well cast bronze mounts (of some size and weight ). The top with French interpretations of the Greek Caryatids (very att...
Category

H 31 in. W 29 in. D 20.5 in.
Important Empire Early 19th Century Fauteuil by Jean-Joseph Chapuis
By Jean Joseph Chapuis
Located in Worpswede / Bremen, DE
Despite his long life, very little is known about the general production of menuisier (chairmaker) Jean-Joseph Chapuis and even less about his use of bent laminates, which must be vi...
Category

H 37.5 in. W 23 in. D 18 in.
19th Century French Empire Mahogany Brown Wood Fauteuils or Armchairs Red, Pair
Located in London, GB
A pair of 19th century Empire mahogany fauteuils, with unusual back splats carved with a roundel of laurel leaves to the centre, layered on top of a Greek lyre form, the seats uphols...
Category

H 36 in. W 23 in. D 23 in.
Suite of Painted Bergere, Fauteuil and Footstool
Located in Stamford, CT
A suite of bergere, fauteuil and footstool painted in Swedish Empire form.
Category

H 35.04 in. W 16.93 in. D 16.93 in.
Empire Mahogany Fauteuil or Armchair
Located in Berlin, DE
An Empire mahogany fauteuil or armchair a´ la Reine in the manner of Jacob Fre`res/Francois Honore´ Georges Jacob Desmalter (1770-1841), newly upholstered in Fine green sateen from M...
Category

H 38.19 in. W 22.05 in. D 20.08 in.
Pair Of French Empire Fruitwood Fauteuils
Located in Essex, MA
Each with square upholstered back and bowed seat , carved down swept arms , raised on square section curved legs
Category

H 36.5 in. W 23 in. D 23.5 in.
Pair of French Empire Fruitwood Fauteuil
Located in Essex, MA
Each with an upholstered back with conforming frame and down swept carved arms, bowed seat raised on slightly curved square legs.
Category

Pair of Danish Empire Fauteuils with Swan Motif, circa 1830

H 31.5 in. W 24 in. D 17.5 in.
Empire Mahogany Fauteuil De Bureau (Desk Armchair)
Located in Boston, MA
The curved back terminating in carved lion's heads above a black leather seat on ring-turned front legs ending in lion feet and back saber legs.
Category

H 35 in. W 23.5 in. D 24 in.
Important Neopolitan Empire Giltwood Fauteuil, Italy, circa 1810
Located in Kinderhook, NY
An important Italian giltwood fauteuil of exceptional design and exquisite detail crafted in Naples and attributed to Pietro Galizia, circa 1810, having fish-scale crest-rail and uph...
Category

H 36 in. W 22.75 in. D 20 in.
19th c. Empire Pair of Fauteuils or Arm Chairs
Located in Winter Park, FL
A good pair of fauteuils made of solid walnut with high back and deep seating. Pegged construction. Recovered with a white linen fabric and down cushion. Very comfortable. One arm c...
Category

One Pair Of Empire Walnut Fauteuils.

H 35.5 in. Dm 22 in.
Pair Empire apinted and Gilt Fauteuil
Located in Hudson, NY
This important pair of chairs from the empire peroid are large in scale and dramatic if making a statment is required.We are not sure if they are from France or Italy but the style ...
Category

H 37 in. W 24.5 in. D 20 in.
French Empire Carved, Gilded and Ebonized Walnut and Upholstered Fauteuil
Located in Atlanta, GA
having a slightly concave backrest with gilded lions heads atop the armrests, the arms supports with carved egyptian caryatids, having flared rear legs, the front legs with cast bron...
Category

H 33 in. W 28.5 in. D 20 in.
Pair of French Empire 19th Century Fauteuils
Located in Baton Rouge, LA
Mahogany Empire pair of fauteuils made around 1825. These wonderful chairs have a rectangle padded back, down curved arms with dolphin supports - seat of chair is slightly bowed in t...
Category

H 34 7/8 in. W 22.75 in. D 19 in.
An Early 19th Century Empire Period Fauteuil
Located in London, GB
An early nineteenth century walnut fauteuil or open armchair with upholstered back and seat, having a finely flamed crest rail, the arms, headed by carved scallop shells and supporte...
Category

H 35 in. W 23 in. D 25 in.
19th Century Parcel Gilt Empire Style Fauteuil
Located in Kilmarnock, VA
Stunningly carved French Fauteuil with swans supporting the handles and bellflowers carved on the legs. The back has a central bar which has been upholstered over and under the upho...
Category

H 36.5 in. W 23 in. D 22 in.
Pair of 19th Century Empire Period Mahogany Fauteuils, France
Located in Atlanta, GA
A Pair of Empire period mahogany fauteuils/arm chairs with winged caraytid figures. The fauteuils dating from the fist quarter of the 19th century and French in origin. For many ...
Category

Empire Fauteuil For Sale on 1stDibs

With a vast inventory of beautiful furniture at 1stDibs, we’ve got just the empire fauteuil you’re looking for. Frequently made of wood, mahogany and fabric, every empire fauteuil was constructed with great care. Your living room may not be complete without an empire fauteuil — find older editions for sale from the 19th Century and newer versions made as recently as the 20th Century. An empire fauteuil is a generally popular piece of furniture, but those created in Empire styles are sought with frequency. A well-made empire fauteuil has long been a part of the offerings for many furniture designers and manufacturers, but those produced by Jean Joseph Chapuis are consistently popular.

How Much is a Empire Fauteuil?