H 40.5 in. W 66 in. D 20 in.
Louis XVI Style Gilt Decorated Wall or Console Mirror
Located in Stamford, CT
Finely carved and gilt decorated wall or console mirror this made in France Mirror is done in the Louis XVI Fashion having carvings of fruit and the like with scrolls decorating the ...
Category

H 68 in. W 34.5 in. D 3 in.
Center Table or Console Louis XVI Jansen Style Stunning Marble Top Gilt Base
By Maison Jansen
Located in Stamford, CT
Stamped Jansen center table having a gilt base and fine pink, grey and white veined marble-top. The top having been professionally repaired. The Louis XVI style center table having b...
Category

Console by Louis Katona, France, circa 1925 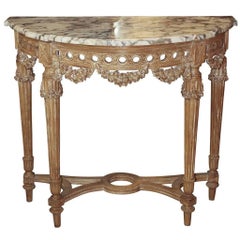 H 33.5 in. W 32 in. D 13.5 in.
Louis XVI Style French Console Table
Located in Austin, TX
Louis XVI style French console table in the Louis XVI style made of mahogany and finished with gilt brass details throughout. This piece is ebonized and has a hand-rubbed French poli...
Category

H 32.5 in. W 56.5 in. D 23 in.
French Louis XVI Style Console Table
Located in Barntrup, DE
This elegant Louis XVI style console table is made of walnut wood. The table is supported by four tapered, fluted and carved legs so it does not have to be attached to the wall and c...
Category

H 29 in. W 31.5 in. D 18 in.
Monumental French Louis XVI Style Console, 1950s
By Maison Jansen
Located in Paris, FR
Though this console was made during the 1950s, it’s not only its style that’s of the Louis XVI period in furniture making its quality construction would make it fit in among antiques...
Category

H 37 in. W 42 in. D 17 in.
A Pair of French Louis XV Manner Console Tables
Located in London, GB
A fine pair of console tables in the Louis XV Manner Constructed in carved and gilded wood; rising from four swept and scrolled legs adorned with acanthus designs, and dressed with ...
Category

H 31.5 in. W 46.5 in. D 24.5 in.
Monumental Maison Jansen French Louis XVI Style Console, 1950s
By Maison Jansen
Located in Paris, FR
Though this console is stamped Maison Jansen and was made during the 1950s, it’s not only its style that’s of the Louis XVI period in furniture making its quality construction would ...
Category

H 32.5 in. W 45.75 in. D 19.75 in.
French Louis XVI Walnut Console with Gray Marble Top
Located in New Orleans, LA
Unusual French Louis XVI Console Table with Swag motif across the front and sides all culminating in a cartouche in the center with a shaped gray marble top. The form is unusual as...
Category

H 31 in. W 45 in. D 17 in.
Louis XV Style Console
Located in West Palm Beach, FL
This stylish and chic wall console dates to the late 18th to early 19th century and has been professionally restored. The piece was acquired from a Palm Beach estate. Note: We have...
Category

How Much is a French Louis Console?

A French louis console can differ in price owing to various characteristics — the average selling price 1stDibs is $6,829, while the lowest priced sells for $760 and the highest can go for as much as $285,000.