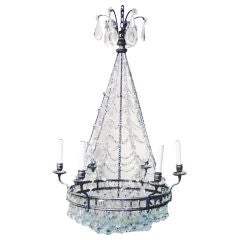 H 34 in. Dm 24 in.
Wonderful French Neoclassical Bronze Crystal Regency Baltic Empire Chandelier
Located in Roslyn, NY
A wonderful French neoclassical bronze and crystal chandelier in the Regency, Baltic design. Each of the eight arms are draped with delicate crystals, and fished with an elegant cut ...
Category

H 60 in. Dm 30 in.
Hollywood Regency Gilt Bronze and Crystal Chandelier
Located in Stamford, CT
A finely cast gilt bronze tiered chandelier having large and impressive crystals. This one of a kind lighting fixture is simply stunning and certain to spark up conversation. 25 ligh...
Category

How Much are French Regency Pendants?