H 40 in. W 16 in. D 16 in.
Exceptional Crackled Glass Globe Pendant Lamp by Moe Lighting
By Moe Light
Located in South Charleston, WV
A unique heavy crackled glass produced in Italy for Moe and assembled in the USA, this pendant lamp is a fine example of italian glass workmanship and American brass manufacturing fo...
Category 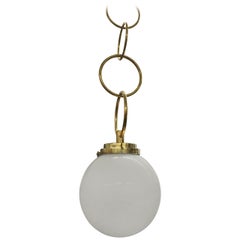 H 27 in. W 18 in. D 18 in.
Italian "Indented" Blown Glass Globe Pendant Light
By AVMazzega
Located in New York, NY
A wonderful and sculptural Italian hand blown glass globe pendant light fixture, circa 1970. Made in Murano, Italy. One of two pendants available. The glass shade is opaque white at ...
Category

H 50 in. Dm 14 in.
Midcentury Stain Glass Open Globe Pendant Light
Located in Brooklyn, NY
Mid-Century Modern pendant light features linked stain glass plates that form an open bottom globe with brass fitter and 45 inches of chain that is wired to accept up to a 100 watt b...
Category

H 30 in. W 10 in. D 10 in.
Glass Globe Hanging Pendant Light with Brass Hardware
Located in Los Angeles, CA
This uniquely designed glass hanging pendant has diagonal ridges and a brass base with Victorian style accents. The neutral, clear glass globe makes this piece fit beautifully in any...
Category

H 34 in. Dm 32 in.
RAAK Four-Light Pendant with Smoked Glass Globes
By RAAK
Located in New York, NY
This highly modern light fixture, produced circa 1965 by RAAK of Amsterdam, Netherlands, is comprised of four hanging pendants, each with smoked glass globes of varying sizes, suspen...
Category

H 15 in. Dm 13 in.
Arabesque Globe Hanging Light
By MM Lampadari
Located in Milan, IT
This gorgeous globe-shaped hanging light is a perfect example of craftsmanship used to artfully blow glass. This piece is part of the Arabesque collection, hangs from a slim cord, an...
Category

H 48 in. W 18 in. D 18 in.
Balise Pendant Light in Brass with 4 Opal Glass Globes
By Atelier de Troupe
Located in Los Angeles, CA
Playful and graphic, the Balise is inspired by the 1960s and the irreverence of Jean Roye`re. The Bailse is fabricated in black powder-coated steel with a 6" opal glass globe. The bl...
Category

H 10.63 in. Dm 9.85 in.
Italian Murano Glass Globe and Chrome Pendant Light, 1970s
Located in Clivio, Varese
Gorgeous pendant light with big Murano glass globe in mottled glass and chromed lamp base. The glass has a very big diameter and is in very good condition. The chrome have been poli...
Category

How Much is a Glass Globe Light?