H 15.5 in. Dm 39 in.
Stylish & Majestic Looking 1950s, Bronze and Green Round Top Onyx Coffee Table
Located in Lisse, NL
Wonderfully made and great looking table. This classical design coffee table will look perfect in a classical, in a Hollywood Regency, but also in some contemporary interiors. The ...
Category

H 18.31 in. W 29.53 in. D 26.38 in.
Mathilde Green Coffee Table
Located in Milan, IT
Part of a two-piece series, this coffee table is modern and sophisticated. Its rectangular top in Green St. Denis marble (2 cm thick) is mounted on a frame in metal with a black fini...
Category

H 16.93 in. W 39.38 in. D 26.38 in.
"Jael Green" Coffee Table by Ivan Paradisi, Italy
By Ivan Paradisi
Located in Turin, IT
This exquisite elegant coffee table was introduced at the Milan Design Week 2019. On its relatively small surface it encases an incredible amount of patterns created by the sets of m...
Category

H 12.6 in. Dm 23.63 in.
Modern Green Coffee Table Marbled Scagliola Art Decor Handmade in Italy
By Cupioli made in Italy
Located in Rimini, IT
The traditional technique of Scagliola art is now used and adapted to the needs of contemporary taste and this is a perfect example. The color becomes the great protagonist and the ...
Category

H 11.82 in. W 57.09 in. D 33.47 in.
Spinning Top Green Coffee Table with Revolving Top Plane by Paolo Giordano
By Paolo Giordano
Located in Firenze, IT
Whether you want to impress your guests or you just want to enjoy your coffee in a pleasant ambient, you can get the spinning top green. This coffee table features a revolving top pl...
Category 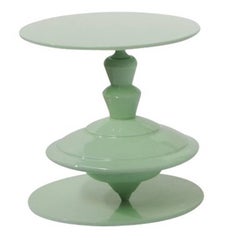 H 14.97 in. Dm 14.97 in.
Modern Green Coffee Table Marbled Scagliola Art Decor Top Gold Leaf Wooden Base
By Cupioli made in Italy
Located in Rimini, IT
The traditional technique of Scagliola art is now used and adapted to the needs of contemporary taste and Aurora T is a perfect example. The color becomes the great protagonist and ...
Category

H 13.78 in. W 55.12 in. D 31.5 in.
Vintage Mint Green Coffee Table from Thailand with Crackled Finish and Chow Legs
Located in Yonkers, NY
A Thai vintage wooden coffee table from the mid-20th century, with mint green crackled finish and chow legs. Born in Thailand during the midcentury period, this charming coffee table...
Category

H 16 in. W 48 in. D 26 in.
Coffee Table with Pull Out Shelf by Van Keppel-Green
Located in Pasadena, CA
This white formica and dark stained mahogany coffee table features two tiers. The bottom shelf can be pulled out and adjusted at the required length as visible in our 2nd photo. The ...
Category

Coffee Table with Pull Out Shelf by Van Keppel-Green

H 18.0 in. W 34.50 in. D 23.75 in.
Green Marble Coffee Table
By Cipriani Homood
Located in Milan, IT
Stylish and bold in character, this coffee table features a color and design that is reminiscent of a lush, dark forest. The metal base is black, while the marble top is an elegant d...
Category

H 16.93 in. W 39.38 in. D 39.38 in.
Contemporary Coffee Table Green Donald Wood by Chapel Petrassi
By Chapel Petrassi
Located in Le Perreux-sur-Marne, FR
Donald is a multifunctional table with a sculpturally cosmic aspect and colorful circular shapes. The sculptural silhouette has a wooden structure composed of a truncated cone that s...
Category

H 27.5 in. W 32 in. D 54 in.
Extraordinary Round Green Marble Coffee Table
Located in Vlimmeren, BE
This exclusive round green marble coffee table can be dated in the 1970s. It was bought in the Netherlands by the previous owners. Unfortunately we don’t know the designer and produ...
Category

H 11.82 in. Dm 53.15 in.
Coffee Table 'I' in Mint Green Terrazzo
By Bentu Design
Located in Paris, FR
'I' is a collection of tables: coffee / side tables, dining tables, bar tables. The base and the structures are in steel, and the tabletop is in terrazzo. by Bentu design Man...
Category

H 18.5 in. W 36 in. D 20 in.
Stunning Art Deco Coffee Table in Emerald Green Parchment Goatskin
Located in Rome, IT
Coffee table in genuine emerald green parchment goatskin leather, sitting on four polished brass feet. The top is made of several rectangular leather pieces placed side by side. Top...
Category

H 15.36 in. W 39.38 in. D 19.69 in.
Dolomiti Green Alps Marble Tall Coffee Table
By VG New Trend
Located in Milan, IT
Adorned with the striking veins and intense dark-green background of the Green Alps marble top, this tall coffee table will make a statement in both a contemporary and Classic home, ...
Category

H 16.15 in. Dm 33.47 in.
Dolomiti Green Alps Marble Low Coffee Table
By VG New Trend
Located in Milan, IT
Part of the Dolomiti collection, this stunning low coffee table is a precious addition to a contemporary or classic living room, where it will bring lavishness and a one-of-a-kind ac...
Category

H 20.08 in. W 47.25 in. D 23.63 in.
Green Onyx Coffee Table 1970s Vintage Style
Located in Ceglie Messapica, IT
Vintage coffee table produced in Italy in the 1970s. Green onyx top and chromed structure. In very good conditions with only some sign of time.
Category

H 20.87 in. W 55.12 in. D 25.2 in.
Coffee Table, 1960s, with Green Marble-Top
Located in Gembloux, BE
Pretty round coffee/cocktail salontable with a vibrant, vivid green marble-top "Patricia Vert". On beautiful gilt patined iron base. Base and top has age appropriate wear, but absol...
Category

H 16.75 in. Dm 38 in.
French 1950s Green Painted Iron Coffee Table
Located in Isle Sur La Sorgue, Vaucluse
Unusual rectangular coffee table, the base made up of a series of six arches, giving the table a dynamic feel (an arch at each side, and two intersecting ones, making up a stretcher ...
Category

H 18.12 in. W 30.32 in. D 18.51 in.
Rectangular Cocktail Camel Table by Van Keppel and Green
Located in New York, NY
Ingenious cocktail table that converts to a dining table, known as the Camel table. Conceived by Hendrik Van Keppel and Taylor Green the innovative team of California furniture desig...
Category

H 14.75 in. W 51.25 in. D 51.25 in.
Lucky Coffee Table
By Giulia Ligresti
Located in Milan, IT
This original coffee table belongs to a series of furnishing pieces designed by Giulia Maria Ligresti that combine artistic flair and artisan quality. Handcrafted of iron with a four...
Category

H 12.6 in. W 23.63 in. D 23.63 in.
19th Century Canadian Green Painted Coffee Table
Located in Sheffield, MA
This two-drawer coffee table from 1880 features original vibrant green paint on its base. The table, from the Quebec region, has a natural finish on the top. The entire look is as or...
Category

H 17.5 in. W 42 in. D 30 in.
Seafoam Green Lucite and Murano Glass Coffee Table on Brass Base "Riflessioni"
By Umberto Cinelli
Located in Rome, IT
Sea Green Murano glass and Lucite coffee table with nickel-plated brass base. This is indeed an outstanding eyecatcher suitable to any room, and one of the most appreciated pieces ...
Category

H 14.18 in. Dm 29.53 in.
Unique Italian Green Aniline and Maple Coffee Table
Located in Meda, MB
This coffee table was produced in Italy in the 1980s and it is in green aniline with a fine maple inlay reminiscent of the Greek Versace. Decoration on the legs is in gold leaf. Co...
Category

H 18 in. Dm 40 in.
Emerald Green Faux Malachite Finish Low Wood Square Coffee or Cocktail Table
Located in Oklahoma City, OK
A square wooden coffee table decorated in an emerald green, black and white faux malachite finish. The piece is created from wood and is not extremely heavy. All four sides and the t...
Category

H 21.5 in. W 35 in. D 22.75 in.
Sketch Quadro Coffee Table Made of Green Acrylic Des, Roberto Giacomucci in 2020
By Roberto Giacomucci
Located in ancona, IT
Coffee table, handmade in transparent green acrylic colored with an innovative technology. The material is made through the fusion of three plates, one of which partially cured cen...
Category

H 20.87 in. Dm 28.35 in.
Matt Green, Single Form Square Aluminium Coffee Table, Customisable
By Jo Wilton and Mirka Grohn
Located in Leicester, GB
Our latest design - the single form coffee table. An elemental design with focus on form and function. Made in powder coated aluminium and available in customisable colours, the sing...
Category

H 15.75 in. W 15.75 in. D 55.12 in.
Giorgio Tura Coffee Table in Green Parchment and Brass
By Tura
Located in Milano, IT
Elegant and refined coffee table by Giorgio Tura from the 1980s. The coffee table is totally made of green parchment with beautiful grain. As a support surface we find a thick glass ...
Category

How Much are Green Coffe Tables?

Green coffe tables can differ in price owing to various characteristics — the average selling price at 1stDibs is $2,899, while the lowest priced sells for $195 and the highest can go for as much as $38,500.

As a practical centerpiece to your living area, antique and vintage coffee and cocktail tables are an invaluable addition to any interior.