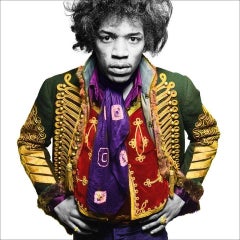 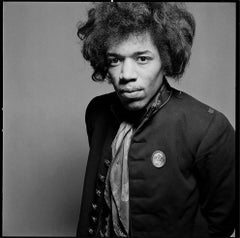 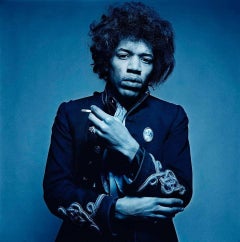 Jimi Hendrix
By Gered Mankowitz
Located in Beverly Hills, CA
in 1991 Gered teamed up with the designer David Costa. Together, they produced a series of limited silkscreen prints based on his creative archive. The first subject in this major pr...
Category 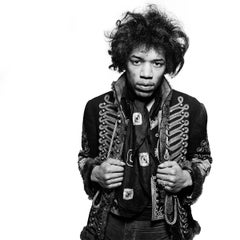 H 16 in. W 20 in.
Jimi Hendrix, Mason's Yard, 1967
By Gered Mankowitz
Located in New York, NY
This photo was taken in 1967 at Gered’s Mason Yard studio during the Experienced sessions. It’s one of the most recognizable black and white photographs of Jimi Hendrix. In this imag...
Category

H 30 in. W 30 in.
Jimi Hendrix Colorized
By Gered Mankowitz
Located in Marina del Rey, CA
Color Portrait of Jimi Hendrix. Gered Mankowitz was born in London, England, on 3rd August 1946. At the end of 1963 Gered opened his first studio, at 9 Masons Yard in the heart of ...
Category

How Much is a Jimi Hendrix Gered Mankowitz?

The price for an artwork of this kind can differ depending upon size, time period and other attributes — a jimi hendrix gered mankowitz in our inventory may begin at $500 and can go as high as $16,177, while the average can fetch as much as $2,250.

Gered Mankowitz is responsible for some of the most iconic images ever taken of music’s greatest performers. He began with the Rolling Stones in the mid-1960s and never looked back. Over the course of a career spanning more than five decades, he has strengthened the cultural impact of the photographic genre he practices.

Mankowitz’s work has been explored in numerous books and exhibitions and is a subject explored in 2020's docuseries Icon: Music Through The Lens, airing on British television channel Sky Arts and streaming online. But a fitting introduction to this firebrand photographer would start with an electric shock, of sorts.

In 1967, he was commissioned to photograph a 24-year-old music prodigy by the name of Jimi Hendrix. Mankowitz, three years his subject’s junior, wasn’t sure what to expect of the guitar sensation from Seattle, who had just settled in the United Kingdom and was already being hailed by his peers as an artistic genius. The pictures that came out of the session, along with those produced during a second shoot with Hendrix that same year, are the most widely known and regarded as the most important portraits of the seminal guitarist. They not only celebrated Hendrix’s revolutionary spirit and ineffable charisma but also helped define an entire era of musical creativity.

The assignments kept rolling in, and soon Mankowitz had established a reputation as a spirited rock ’n’ roll portraitist. Then came the dream job: In 1965, at just 19, he became the official photographer of the Rolling Stones, a position that he held for two and a half years and ushered him into adulthood. Mankowitz maintains that he kept a cool head on the job and a professional attitude. “The Stones and I were great friends, but I always knew my limits. I didn’t feel I had to hang out with the band in order to fit in,” he says, confiding, “To be honest, I had a pretty wild lifestyle without their help!” One of Mankowitz’s most famous images of the Stones became the cover for their 1967 album Between the Buttons.

On 1stDibs, shop an impressively wide selection of Gered Mankowitz's work, which features some of the most significant musical artists of all time.