H 13.39 in. W 20.56 in. D 0.04 in.
Untitled from Joan Miro Lithographes II
By Joan Miró
Located in San Francisco, CA
Original lithograph printed in colors on Arches wove paper. Hand-signed in pencil in the margin lower right Miro. A superb impression of the definitive state, from the deluxe editi...
Category 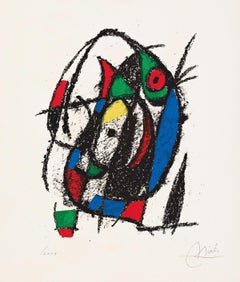 H 15 in. W 11 in. D 0.1 in.
Cover from 'Miró Lithographs II, Maeght Publisher' original print by Joan Miró
By Joan Miró
Located in Milwaukee, WI
This original lithograph is one of twelve produced by Joan Miró especially for the second volume of the catalogue of his lithographs. These are excellent examples of his later work a...
Category

Joan Miró
Bougrelas and his Mother II, from: Series for King Ubu, 1966

H 12 in. W 9.4 in.
Album 13 (Plate II)
By Joan Miró
Located in Beverly Hills, CA
Joan Miro Original Lithograph in black, from the signed, dated and numbered limited edition of 75. From the Miro Album 13 Suite of 13 lithographs. Mourlot 74
Category

Find the exact joan miro lithograph ii you’re shopping for in the variety available on 1stDibs. Find Abstract versions now, or shop for Abstract creations for a more modern example of these cherished works. If you’re looking for a joan miro lithograph ii from a specific time period, our collection is diverse and broad-ranging, and you’ll find at least one that dates back to the 20th Century while another version may have been produced as recently as the 21st Century. When looking for the right joan miro lithograph ii for your space, you can search on 1stDibs by color — popular works were created in bold and neutral palettes with elements of gray, beige, white and blue. Artworks like these of any era or style can make for thoughtful decor in any space, but a selection from our variety of those made in lithograph can add an especially memorable touch.

How Much is a Joan Miro Lithograph Ii?

The price for an artwork of this kind can differ depending upon size, time period and other attributes — a joan miro lithograph ii in our inventory may begin at $210 and can go as high as $38,000, while the average can fetch as much as $441.