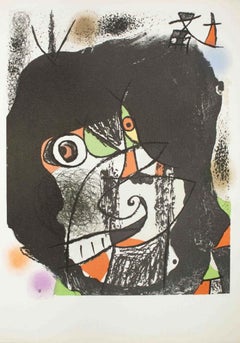 H 14.18 in. W 21.07 in. D 0.04 in.
Composition - Original Lithograph by Joan Mirò - 1975
By Joan Miró
Located in Roma, IT
Composition is an original litograph realized by Joan Mirò in 1975. The artwork is in good conditions, except for some stains on the upper right corner of the yellowed paper. The a...
Category

Find the exact joan miro original you’re shopping for in the variety available on 1stDibs. In our selection of items, you can find Abstract examples as well as a Surrealist version. If you’re looking for a joan miro original from a specific time period, our collection is diverse and broad-ranging, and you’ll find at least one that dates back to the 20th Century while another version may have been produced as recently as the 20th Century. On 1stDibs, the right joan miro original is waiting for you and the choices span a range of colors that includes gray, beige, black and white. Artworks like these of any era or style can make for thoughtful decor in any space, but a selection from our variety of those made in lithograph, etching and engraving can add an especially memorable touch.

How Much is a Joan Miro Original?