W 55 in. L 115 in.
Karabagh Rug
Located in New York, NY
Karabagh rug. Stylized or realistically drawn floral designs in Karabagh, Armenia can be traced back to imperial Russian heritage of this prolific weaving region. This rug is a parti...
Category 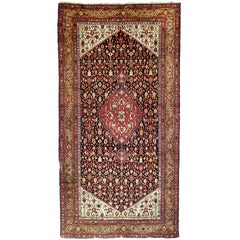 W 86 in. L 257 in.
Roses of Karabagh Rug
Located in New York, NY
Roses of Karabagh rug. Realistically drawn floral designs in Karabagh, Armenia can be traced back to imperial Russian heritage of this prolific weaving region. This small rug is a pa...
Category

W 38 in. L 77 in.
Karabagh Rug Pillow
Located in New York, NY
Pillow made from a Caucasian Karabagh rug.
Category

W 57 in. L 94 in.
Plush Vintage Karabagh Rug
Located in New York, NY
Plush pile Karabagh rug with an all-over Herati and floral design on a salmon colored field and a floral border in soft brown/ some accents in light blue sparkled in the field and bo...
Category

W 16 in. L 20 in.
Pictorial Reindeer Russian Karabagh Rug
Located in New York, NY
A pictorial Russian Karabagh rug depicting a bunch of reindeers floating around a lady. The background is a tomato red, the border has a floral motif in dark brown, circa 1940. Me...
Category

W 48 in. L 72 in.
Antique Caucasian Karabagh Rug, circa 1900
Located in Secaucus, NJ
Across the Aras river from Karajeh is the Armenian Caucasian rug area of Karabagh (Black Garden) which wove scatters, runners and gallery rugs from the 17th century onwards, often wi...
Category

W 48 in. L 117 in.
Antique Karabagh Rug with Animal Motifs
Located in New York, NY
On a lightly abrashed straw field lions and bears attacked spotted deer while wolves and foxes run about, all amid small diamonds, palmettes and leaves, detailed in dark brown, grey,...
Category

W 48 in. L 77 in.
Lady Deer Colorful Pictorial Vintage Karabagh Rug
Located in New York, NY
Lovely mid-20th century Russian Karabagh rug with 4 ladies and deer’s surrounded by a floral border. Love the neon green field, you see some of the green in the border too Size: 4...
Category

W 54 in. L 126 in.
Persian Karabagh Rug, Soft Palette, circa 1910s
Located in New York, NY
The shaped, rust central cartouche shows a Herati pattern and is set on a layered field in shades of cream and pearl. The border jogs at one end while displayed a black and brick rev...
Category

W 58 in. L 106 in.
Antique Caucasian Red Karabagh Rug, Floral Palette
Located in New York, NY
An outer wreath of oak leaves surrounds and inner leaf and rose circlet on each of the two abrashed orange to salmon-pink panels, with realistic roses in the corners and at the sides...
Category

W 61 in. L 99 in.
Antique Karabagh Rug, circa 1900's
Located in Los Angeles, CA
This is a Karabagh rug from Caucasus with all over floral design.
Category

Karabagh Rug For Sale on 1stDibs

Choose from an assortment of styles, material and more with respect to the karabagh rug you’re looking for at 1stDibs. A karabagh rug — often made from fabric, wool and cotton — can elevate any home. Whether you’re looking for an older or newer karabagh rug, there are earlier versions available from the 18th Century and newer variations made as recently as the 21st Century. A karabagh rug is a generally popular piece of furniture, but those created in Folk Art, Art Deco and Art Nouveau styles are sought with frequency.

How Much are Karabagh Rug?

Prices for a karabagh rug can differ depending upon size, time period and other attributes — at 1stDibs, they begin at $145 and can go as high as $89,000, while the average can fetch as much as $5,500.