W 15 in. L 25 in.
Midnight Blue Genuine European Large Cowhide Rug
By KLASP Home
Located in Bronxville, NY
Midnight Blue Cowhide rug. All of our hair cowhides are full hides and measure approximately 7' W x 8' L. They are of the highest quality from the French region of Normandy and na...
Category 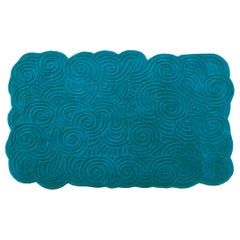 W 98.43 in. L 137.8 in.
Celeste Blue Genuine Large European Cowhide Hair Rug
Located in Bronxville, NY
Celeste blue Cowhide rug. All of our Cowhide rugs are full hides and measure approximately 7' W x 8' L. They are of the highest quality from the French region of Normandy and natu...
Category

W 84 in. L 96 in.
Large Blue Moroccan Carpet or Rug
Located in Alessandria, Piemonte
1179. Rare large Moroccan carpet in a wonderful blue color: a clear reference to the water of the deep sea. Perfect for a sea house. Look also to LU 137922949552: placed side by sid...
Category

21st Century and Contemporary Moroccan Other Moroccan and North African ...

W 136 in. L 202 in.
Large Modern Oushak Turkish Rug Over-Dyed in Blue Shades
By Keivan Woven Arts
Located in Atlanta, GA
This modern Turkish carpet with a classical composition has been over-dyed with blue, light blue pigments. With both classic and contemporary characteristics, this beautiful carpet c...
Category

W 128 in. L 176 in.
Antique Persian Blue and Rose Floral Palmettes Kirman Large Rug
Located in New York, NY
Kirman is an ancient city, with an incredible history going back over a thousand years. Marco Polo was one of the first westerners to view Kirman rugs. The city is located in the cen...
Category

W 73 in. L 84 in.
Antique Persian Red Gold Navy Blue Large Oversize Tabriz Rug
Located in New York, NY
Tabriz is Iran's second oldest city, and was the earliest capital of the Safavid dynasty. The city has been the foremost Persian rug production town since the 15th century and the ce...
Category

W 157 in. L 232 in.
Antique Red Navy Blue Persian Manchester Wool Kashan Large Area Rug
Located in New York, NY
This antique Manchester Wool Kashan, circa 1880-1900 is one measures 10.4 x 17.10 ft. and is an excellent example of this variety of carpet. It was manufactured by the Taftanjian Com...
Category

W 40 in. L 99 in.
Large Turkomen Rug with All-Over Design in Blue and Tans
Located in Atlanta, GA
Antique Persian rug in neutral tones with geometric motifs, rug MEV-1901-101, Turkomen, circa 1910. This large Turkomen carpet from 1900 is characterized by its all-over design of i...
Category

Large Turkomen Rug with All-Over Design in Blue and Tans

W 55 in. L 79 in.
Angora Turkish Oushak Large Rug in Gray, Light Blue, and Coral
By Keivan Woven Arts
Located in Atlanta, GA
light blue, coral, and grey angora Oushak rug from Turkey, rug an-134588, country of origin / type: Turkey / Angora Oushak From our Angora Collection, this piece is made with a comb...
Category

W 168 in. L 194 in.
Oversize Large Antique Persian Rust Blue Ivory Mahal Ziegler Rug, circa 1940s
Located in New York, NY
Persian Mahal carpets have made quite a name for themselves among the weaving culture since the 19th century. The sophisticated and quirky design of these beauties is what separates ...
Category

W 174 in. L 246 in.
Antique Large Square Navy Blue and Rust All Over Pattern Malayer Rug
Located in New York, NY
This is a fine example of a large square Antique Malayer dating from the 1910-1920s measuring: 13.8 x 13.10 ft. Antique Malayer rugs were woven in the small town of Malayer, locat...
Category

W 164 in. L 166 in.
Large Hand Knotted Rug Contemporary in Style of Oushak Puple Blue Kilim
Located in Lohr, Bavaria, DE
A large room sized rug with design in style of Oushak. This beautiful rug was handmade using two different styles. The background is flat-woven Kilim and the motives are hand knotte...
Category

With a vast inventory of beautiful furniture at 1stDibs, we’ve got just the large blue rug you’re looking for. Frequently made of fabric, wool and animal skin, every large blue rug was constructed with great care. If you’re shopping for a large blue rug, we have 144 options in-stock, while there are 86 modern editions to choose from as well. You’ve searched high and low for the perfect large blue rug — we have versions that date back to the 19th Century alongside those produced as recently as the 21st Century are available. A large blue rug made by Modern designers — as well as those associated with Art Deco — is very popular. A well-made large blue rug has long been a part of the offerings for many furniture designers and manufacturers, but those produced by Art Hide, Keivan Woven Arts and Paulo Kobylka are consistently popular.

How Much is a Large Blue Rug?