H 56 in. W 54.5 in. D 17.25 in.
Vitrine
Located in Napa, CA
19th Century mirrored Vitrine or Bookcase with a great patina. The top cabinet has four adjustable shelves with two glass doors that can be locked. Vintage condition.
Category

H 63.5 in. W 34.5 in. D 15.5 in.
French Vitrine in Metal and Mirrored Glass
Located in Waalwijk, NL
Large vitrine, glass, metal, mirrored glass, France, 1950s Elegant glass vitrine with mirrored glass in the back and bottom which shows an admirable patina. Through the glass slidin...
Category 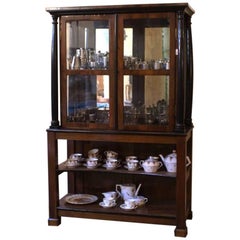 H 65 in. W 21.5 in. D 15 in.
Art Deco Hungarian Vitrine in Walnut
Located in Houston, TX
Vitrine is made out of high quality walnut wood. It has 2 keyed drawers on the bottom. Sides are covered up with glass. Front is covered with 2 sliding doors. There are 2 glass shelv...
Category

H 41.5 in. W 30 in. D 14.5 in.
Art Deco French Vitrine in Burl Walnut
Located in Houston, TX
Beautiful vitrine is made out of burl walnut wood. It has trapezoid shape top and oval bottom. Sides are covered with curved glass and the front has glass keyed door. Upper part has...
Category

H 82.68 in. W 40.56 in. D 21.26 in.
French Vitrine/China Cabinet, 19th Century with Bronze Dore Mounts, Mirror Back
Located in Houston, TX
Three sided cabinet with the front having beveled glass. The sides are canted And curved. Three glass shelves With mirror on the bottom. The Cabinet has lighting. Bronze dore mount...
Category

H 63 in. W 37.5 in. D 16.5 in.
20th Century Grand Demilune Mahogany Display Cabinet or Vitrine with Mirror Back
Located in CH
Grand Victorian style vitrine with mahogany frame, glass sides and curved glass top. There are three adjustable glass shelves and a mirror back. The front door is with original key a...
Category

H 66.5 in. W 49.5 in. D 17 in.
19th Century Late Biedermeier Walnut Display Cabinet / Vitrine
Located in Pau, FR
A lovely and light walnut cabinet/vitrine, with one original large glass door, glass side panels, and a mirrored back. Two large shelves with two recessed half shelves covered in fab...
Category

H 63.78 in. W 49.22 in. D 15.75 in.
Pair of 19th Century French Giltwood Vitrines from a Paris Jeweler
Located in Los Angeles, CA
A Very Rare and Exquisite pair of French 19th c. Carved Giltwood and Glass Vitrines/Display Cabinets from a Paris Jeweler of the 19th century. Original Mirrored Backings are not in P...
Category

H 75 in. W 46 in. D 15 in.
19th Century French Louis XVI Walnut Marquetry Vitrine with Glass Door and Sides
Located in Dallas, TX
This elegant, antique fruitwood display cabinet was crafted in France, circa 1880. The cabinet is outfitted with four adjustable glass shelves and has a single front door. The cabine...
Category

H 50 in. W 39.5 in. D 11.5 in.
Mid-Century Modern Showcase and Chest of Drawers Mirrored Glass by Renato Zevi
By Renato Zevi
Located in Palermo, IT
Elegant two-door display cabinet in dark glass by Renato Zevi with brass finishes and interior covered in black suede. The chest of drawers has bronzed mirrored glass with sand-color...
Category

H 82.68 in. W 49.22 in. D 17.72 in.
GHYCZY Cabinet Biri C04, Ristretto Frame, Tiles Brass Matt, Brass Gloss & Brass
By Peter Ghyczy
Located in Swalmen, NL
Peter Ghyczy’s architectural style and his desire to design a vitrine for art collectors, led to this masterpiece (limited edition 12 pieces). The cabinet is a collaboration between ...
Category

H 69.69 in. W 33.08 in. D 14.97 in.
Italian Mid-Century Modern Wood and Glass Showcase Display Cabinet, Storage Case
Located in Miami, FL
Six feet tall and four-level glass shelves Mid-Century Modern showcase made in Italy. Wooden base and tall glass and chrome column display or storage case. The door is at the side ...
Category

H 98 in. W 55 in. D 21 in.
Antique Giltwood Display Case
Located in San Francisco, CA
Old display case made from 19th century water gilt frames. Has glass sides, one shelf, and mirror detail at the top. It is electrified with one bulb. This case was most likely made i...
Category

H 86.62 in. W 45.28 in. D 15.75 in.
19th Century Late Biedermeier or Louis Philippe Display Cabinet in Cherrywood
Located in Miami, FL
A very lovely display cabinet or vitrine in cherrywood with original glass door, glass side panels and mirrored back, with carved bonnet. Offers one storage drawer with working lock ...
Category

H 72.5 in. W 38.5 in. D 18.5 in.
1925 Art Deco Cabinet-Showcase, Can Be Dismantled, Mahogany, Marble, France
Located in Girona, ES
Large Art Deco cabinet-showcase, wood structure that can be completely dismantled. Central block with one door in splendid mahogany veneer and mahogany shelves and one niche with Por...
Category

H 67.33 in. W 66.15 in. D 15.75 in.
Paolo Buffa Goatskin and Etched Glass Art Deco Italian Showcase, 1940
By Paolo Buffa
Located in Rome, IT
Small bookcase by Paolo Buffa, in goatskin and etched glass. Square wooden body all covered in goatskin or parchment leather. This bookcase presents along the entire perimeter of t...
Category

H 64.57 in. W 48.04 in. D 15.75 in.
Islamic Style Silvered Metal and Glass Illuminated Display Cabinet with Shelves
Located in Firenze, IT
Unique of its kind, this tall hexagonal display case recalls a Middle Eastern artisan and artistic workmanship both in its Islamic style architectural shape and metal embossed decora...
Category

H 83 in. W 58 in. D 17 in.
19th Century Ebonized Bronze Mounted Sideboard Vitrine with Matching Mirror
By Brew & Claris
Located in Stamford, CT
19th century ebonized bronze mounted sideboard with matching mirror. This finely constructed sideboard can be used with or without the matching mirror. The mirror is sold separately ...
Category

Mirrored Vitrine For Sale on 1stDibs

At 1stDibs, there are many versions of the ideal mirrored vitrine for your home. Each mirrored vitrine for sale was constructed with extraordinary care, often using glass, mirror and wood. Find 71 options for an antique or vintage mirrored vitrine now, or shop our selection of 1 modern versions for a more contemporary example of this long-cherished piece. You’ve searched high and low for the perfect mirrored vitrine —, we have versions that date back to the 19th Century alongside those produced as recently as the 21st Century are available. A mirrored vitrine, designed in the Art Deco, Mid-Century Modern or Hollywood Regency style, is generally a popular piece of furniture. You’ll likely find more than one mirrored vitrine that is appealing in its simplicity, but Mastercraft, A. M. E Fournier and Bernhard Rohne produced versions that are worth a look.

How Much are Mirrored Vitrine?

A mirrored vitrine can differ in price owing to various characteristics — the average selling price 1stDibs is $6,494, while the lowest priced sells for $960 and the highest can go for as much as $126,000.