H 57 in. Dm 12 in.
Pendant with Prism Globe
By Venfield
Located in New York, NY
Pendant with prism globe. Customization is available in different finishes. Please provide overall height you need to place an order.
Category 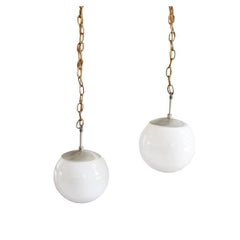 H 27 in. Dm 14 in.
Globe Big, Lighting Fixture Pendant
By Atelier Boucquet
Located in Roeselare, BE
The globe big is a pendant lighting fixture of 60 cm diameter in brass, chemical colored in bronze and provided of led strips. It has a chain in brass of 1m standard which can vary. ...
Category

H 23.63 in. Dm 23.63 in.
Globe Small, Lighting Fixture Pendant
By Atelier Boucquet
Located in Roeselare, BE
The globe is a pendant made in brass, chemical colored bronze and provided of ledstrips. It has a chain of brass of 1m standard which can be varied. It has a size of 50 (also avail...
Category

H 19.69 in. Dm 19.69 in.
1930s Style Prismatic Globe Pendants
By Early Electrics Design Studio
Located in Peekskill, NY
We have a nice collection of these prismatic lamps. The impressive 9 inch diameter is simple, pleasing and gives off a beautiful even light. They are a smaller globe inspired by the ...
Category

H 46.5 in. Dm 15 in.
Large Doria Amber Globe Pendant
By Doria Leuchten Germany
Located in Vienna, AT
Beautiful handblown globe pendant made in Germany by Doria in the 1970s. Textured wave surface glass, crackling and bubbling. Fitted with one E27 bulb up to 100 watts.
Category

H 29 in. W 8 in. D 14 in.
Large Murano Glass Globe Sputnik Pendant
By Doria Leuchten Germany
Located in New York, NY
Large Murano glass globe sputnik pendant light by Doria lighting company. The large glass globe has subtle grey veining and it has been newly rewired for the US with four standard ...
Category

H 13.78 in. Dm 13.78 in.
Glass Industrial Globe Pendant, Denmark, 1930s
Located in Maastricht, NL
An industrial globe shaped pendant lamp in the style of Poul Henningsen. The outer globe is made of clear glass with a frosted glass element underneath and a white metal top. It has ...
Category

H 19 in. W 11 in. D 11 in.
Moroccan White Glass Globe Hanging Pendant
Located in Stamford, CT
Blown globe is 10" high and 9.5" in diameter. This is not electrified.
Category

H 11.82 in. W 11.82 in. D 19.69 in.
Four Globe Pendant Light by Doria
By Doria Leuchten Germany
Located in New York, NY
Pendant light with four textured glass globes by Doria. The globes are graduated in size, and are suspended on cords of varying lengths with polished brass hardware. Each globe has...
Category

How Much are Pendant Globes?

Questions about Pendant Globes
Prices for most pendant globes on 1stdibs are negotiable. You’ll see a "Make an Offer" button on the item details page, indicating that the seller is willing to consider a lower price. It’s not uncommon for customers to get 15–25% off the list price after negotiating. See our tips for negotiating like a pro.
Only experienced, professional sellers who have applied and been thoroughly vetted by our team of experts can sell pendant globes and other quality items on our site. Learn more about becoming a 1stdibs seller.
The 1stdibs Buyer Protection Guarantee provides coverage for qualified purchases in the unlikely event that the item arrives not as described or is damaged. We’ll work with you and the seller to find a resolution, ensuring your satisfaction. View details
We have partnerships with the world's best shipping providers to facilitate seamless and fully-insured delivery from the seller's location directly to you, wherever you are in the world. Our logistics team is comprised of dedicated members who arrange all the details with our partners, servicing and supporting all shipments. Learn more about shipping on 1stdibs.
For your convenience, we offer multiple payment methods, including all major credit cards and PayPal. For many purchases we also offer financing options or wire transfer. Learn more about payment options on 1stdibs.