H 9.85 in. Dm 9.06 in.
Handmade Gold-Pleated Silk Liana S. Pendant Light
By Aqua Creations
Located in Englewood, NJ
The liana S pendant light is the perfect addition to a dining room or kitchen. Part of the Orchestra Family, its concave form is inspired by natural shapes found in music, as well as...
Category

H 24 in. W 72 in. D 15.7 in.
Handmade Silver Pleated Silk Chilli Pendant Light
By Aqua Creations
Located in Englewood, NJ
Suspended from a ceiling plate, Chilli can be installed as a solo signature feature, or hung in a dramatic cluster. Handmade from silk on metal.
Category 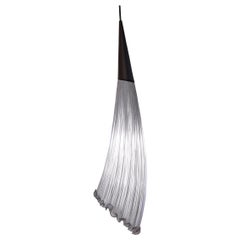 H 8.03 in. Dm 8.66 in.
Handmade Cream Pleated Silk Zooid Diamond Pendant Light
By Aqua Creations
Located in Englewood, NJ
The Zooid Diamond hanging pendant lamp looks like a gem that’s just been mined from the earth. This sculptural chandelier is the center of any room and casts a luminous glow via its ...
Category

H 70.9 in. W 39.4 in. D 39.4 in.
Handmade Pleated Cream Silk Stand By Pendant Light
By Aqua Creations
Located in Englewood, NJ
The Stand By pendant light is a perfectly round-shaped disc featuring a combination of pure simplicity and glamour. Stand By elegantly radiates brilliant light across large areas and...
Category 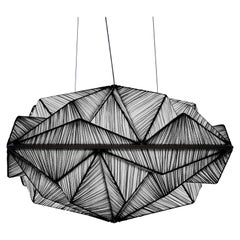 H 58.2 in. Dm 102.3 in.
Handmade Stone Pleated Silk Grace Kinetic Mobile Light
By Aqua Creations
Located in Englewood, NJ
The grace 7 is a suspended kinetic mobile intended for public spaces. This breathtaking 5-meter structure is designed to allow multiple compositions and reconfigurations of its shade...
Category

H 90.6 in. Dm 118.1 in.
Handmade Smoke Pleated Silk Stand by 5 Kinetic Mobile Light
By Aqua Creations
Located in Englewood, NJ
The stand by mobile features handmade silken discs, which appear to hover above the room. This kinetic mobile pendant lamp comes with either 3 or 5 shades which are suspended from an...
Category

H 47.2 in. Dm 118.1 in.
Handmade Gold Pleated Silk Nana 100 Kinetic Mobile Light
By Aqua Creations
Located in Englewood, NJ
The Nana 100 is a mobile hanging light fixture that pays homage to the kinetic artworks of Alexander Calder. Movement is driven by the invisible air currents in your surroundings. It...
Category

How Much is a Pleated Pendant Light?