H 20 in. W 20 in.
Self Portrait on Holiday in Athens, Greece (Slim Aarons Estate Edition)
By Slim Aarons
Located in New York, NY
Legendary photographer Slim Aarons relaxes in a self portrait shot in Athens, near the Acropolis. Slim Aarons said, "I love a solo holiday. It tends to refresh the part of oneself t...
Category

H 40 in. W 60 in.
Self Portrait on Holiday in Athens, Greece
By Slim Aarons
Located in New York, NY
Legendary photographer Slim Aarons relaxes in a self portrait shot in Athens, near the Acropolis. Slim Aarons said, "I love a solo holiday. It tends to refresh the part of oneself t...
Category

Slim Aarons
Self Portrait on Holiday in Athens, Greece, 1955

H 40 in. W 60 in.
Laura Hawk at Paestum - Slim Aarons, 20th century, Greece, Fashion photography
By Slim Aarons
Located in Brighton, GB
Please be aware that the US recently imposed an import duty on photographs printed in the last 20 years which may apply if you are purchasing and importing this to the US. Currency ...
Category 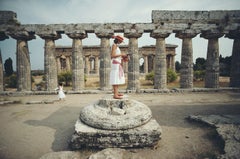 H 20 in. W 30 in.
Self Portrait on Holiday in Athens, Greece (Limited Edition Estate Stamped)
By Slim Aarons
Located in New York, NY
Legendary photographer Slim Aarons relaxes in a self portrait shot in Athens, near the Acropolis. Slim Aarons said, "I love a solo holiday. It tends to refresh the part of oneself...
Category

Find the exact slim aarons greece you’re shopping for in the variety available on 1stDibs. On 1stDibs, the right slim aarons greece is waiting for you and the choices span a range of colors that includes gray and brown. These artworks were handmade with extraordinary care, with artists most often working in digital print, lambda print and laser print. If space is limited, you can find a small slim aarons greece measuring 10 high and 10 wide, while our inventory also includes works up to 60 across to better suit those in the market for a large slim aarons greece.

How Much is a Slim Aarons Greece?

A slim aarons greece can differ in price owing to various characteristics — the average selling price for items in our inventory is $3,000, while the lowest priced sells for $1,320 and the highest can go for as much as $3,950.