W 71 in. L 99 in.
Fine Antique Minimalist Small Sofreh Rug
Located in Milan, IT
A very fine flat-weave with a jewel-like quality that is almost impossible to convey by picture. Distinguished by the use of a very precious type of wool which feels almost like silk...
Category 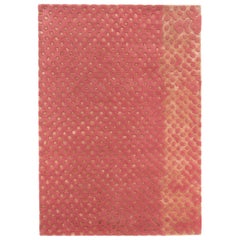 W 63 in. L 90.56 in.
Small Turkish Silk Rug, Handmade Carpet Oriental Rug Tree of Life
Located in Hampshire, SO51 8BY
This elegant Silk rug was woven by hand with the finest organic materials. The central design has been woven on a black-brown background with cream and beige accents that make up the...
Category

W 22.05 in. L 35.44 in.
Vintage Small Moroccan Boujaad Rug
Located in Atlanta, GA
This original carpet features intricate symbols based mostly on tribal motifs, with multi-shades of orange and burnt orange. It is in nice vintage condition with a healthy pile. Wove...
Category

W 48 in. L 86 in.
Losanges One Hand-Loomed Wool Rug by Ronan & Erwan Bouroullec Small
By Nanimarquina, Ronan and Erwan Bouroullec
Located in New York, NY
With the Losanges collection, the Bouroullec brothers continue their study of simplicity and elegance, reinterpreting the traditional Persian rug by using ancient Kilim techniques. ...
Category

W 48 in. L 48 in.
Small Teal, Blue, Orange, Pink, Round Wool and Silk Rug, Butterfly, Handmade
By Sergio Mannino Studio
Located in Brooklyn, NY
Sergio Mannino Studio's collection of rugs is expanded with new designs. (See storefront to look at other items). Hand drawn butterflies seem to come out of the floor. The backgroun...
Category

Dm 78 in.
Small Green, Blue, Orange, Pink, Round Wool and Silk Rug, Butterfly, Handmade
By Sergio Mannino Studio
Located in Brooklyn, NY
Sergio Mannino Studio's collection of rugs is expanded with new designs. (See storefront to look at other items). Hand-drawn butterflies seem to come out of the floor. The backgroun...
Category

W 39 in. L 76 in.
Rare Early 19th Century Small Tribal Antique Khotan Rug
Located in New York, NY
Antique Khotan rugs, antique rugs from the city of Khotan have a style that is all their own. These exceptional rugs make the legends of Marco Polo and the Silk Road come alive. Khot...
Category

How Much is a Small Orange Rug?

A small orange rug can differ in price owing to various characteristics — the average selling price 1stDibs is $2,730, while the lowest priced sells for $225 and the highest can go for as much as $9,600.