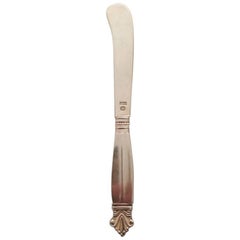 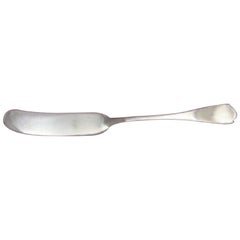 H 1 in. W 1 in. D 1 in.
Chrysanthemum Vermeil by Tiffany Sterling Silver Butter Spreader Hh 6"
By Tiffany & Co.
Located in Big Bend, WI
Sterling silver hollow handle butter spreader 6" in the pattern Chrysanthemum vermeil (gold) by Tiffany & Co.. It is not monogrammed and is in excellent condition. 100% Satisfacti...
Category 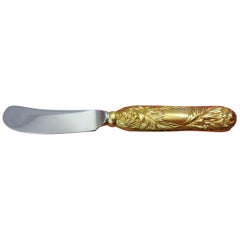 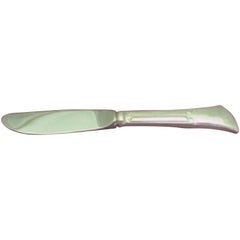 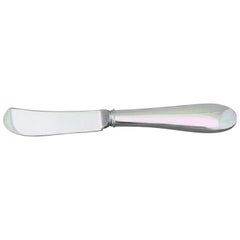 H 1 in. W 1 in. D 1 in.
Cordis by Tiffany & Co. Sterling Silver Butter Spreader Hollow Handle
By Tiffany & Co.
Located in Big Bend, WI
Sterling silver hollow handle butter spreader 6 1/2" in the pattern Cordis by Tiffany. It is not monogrammed and is in excellent condition. Satisfaction Guaranteed!
Category

H 1 in. W 1 in. D 1 in.
Windham by Tiffany Sterling Silver Butter Spreader Hollow Handle Paddle
By Tiffany & Co.
Located in Big Bend, WI
Sterling silver hollow handle butter spreader paddle 6" in the pattern Windham by Tiffany and Co. It is not monogrammed and is in excellent condition. 100% Satisfaction Guaranteed!
Category

H 1 in. W 1 in. D 1 in.
Beekman by Tiffany & Co. Sterling Silver Butter Spreader FH with Nobs
By Tiffany & Co.
Located in Big Bend, WI
Sterling silver flat handle butter spreader with nobs 6" in the pattern Beekman by Tiffany, AKA Tiffany. It is monogrammed (monos vary) and is in excellent condition. Satisfaction...
Category

H 1 in. W 1 in. D 1 in.
Castilian by Tiffany and Co Sterling Silver Butter Spreader HH Pistol
By Tiffany & Co.
Located in Big Bend, WI
Sterling silver hollow handle with stainless paddle blade, butter spreader with pistol grip, 6 1/8". It is not monogrammed and is in excellent condition. Satisfaction Guaranteed!
Category

H 1 in. W 1 in. D 1 in.
Beekman by Tiffany & Co Sterling Silver Butter Spreader FH No Nobs
By Tiffany & Co.
Located in Big Bend, WI
Sterling silver flat handle butter spreader No Nobs 6" in the pattern Beekman by Tiffany - formerly Tiffany . It is not monogrammed and is in excellent condition. Satisfaction gua...
Category

H 1 in. W 1 in. D 1 in.
Vine by Tiffany & Co. Sterling Silver Butter Spreader Flat Handle with Poppy
By Tiffany & Co.
Located in Big Bend, WI
Sterling silver flat handle butter spreader with poppy, 6" in the pattern vine by Tiffany & Co. It is not monogrammed and is in excellent condition. Satisfaction guaranteed!
Category

H 1 in. W 1 in. D 1 in.
King William by Tiffany & Co Sterling Silver Butter Spreader Flat Handle AS
By Tiffany & Co.
Located in Big Bend, WI
Sterling silver flat handle butter spreader all sterling 6" in the pattern King William AKA antique by Tiffany & Co. It is not monogrammed and is in excellent condition. 100% sati...
Category

How Much is a Vintage Butter Spreader?

The average selling price for a vintage butter spreader at 1stDibs is $89, while they’re typically $39 on the low end and $1,434 for the highest priced.