A painter and teacher, Austin Davies was born in Liverpool. He studied at Liverpool School of Art in 1946–51 with Arthur Ballard and Martin Bell. He graduated, did some traveling in war-torn Europe and completed an interior design course. By this time, the 27-year-old Davies was earning a reputation as one of Britain's best up-and-coming Expressionists. He accepted the offer of a full-time lectureship at his old art school. It was Davies's enthusiasm for theatre that led him to the Liverpool Playhouse, where he encountered a young actress called Beryl - now Dame Beryl Bainbridge, the acclaimed novelist. A relationship soon developed, followed by marriage in 1954 and two children. Davies's portrait of Bainbridge from this period Portrait of the Painter's Wife still hangs in Manchester City Art Gallery. Davies was a prominent exhibitor in the Liverpool Academy in the 1950s often showing taut, gritty pictures of the city. He painted a notable portrait of the local Member of Parliament Mrs. Bessie Braddock also. Davies showed at Arts Council, AIA, public galleries in Salford and Newcastle upon Tyne and had several one-man shows including Piccadilly Gallery and Coombs Contemporary, 1997. After some financial difficulties, Davies moved to Auckland, New Zealand in 1975 with his second Wife Belinda, a Kiwi. He is probably better known as the director of Nelson's Suter Gallery than as an artist. Yet, in a little-known previous life, Davies was a celebrated rising star of the British art scene. Retirement allowed him to become a full-time painter in 60 years and work since then suggested that his muse retained both freshness and vigor. Davies cited the work of Abstract Expressionists like Tapies and Rauschenberg as influences and enthused over the Kiwi icons Hotere, McCahon and Woollaston. For his 80th birthday, a retrospective was held at the Suter - a rare opportunity to view 60 years of excellence from an artist and art administrator whose innovation and dedication have enriched both the British and the New Zealand art scenes. He died in 2012. 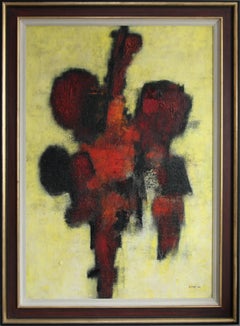 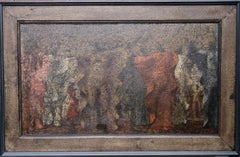