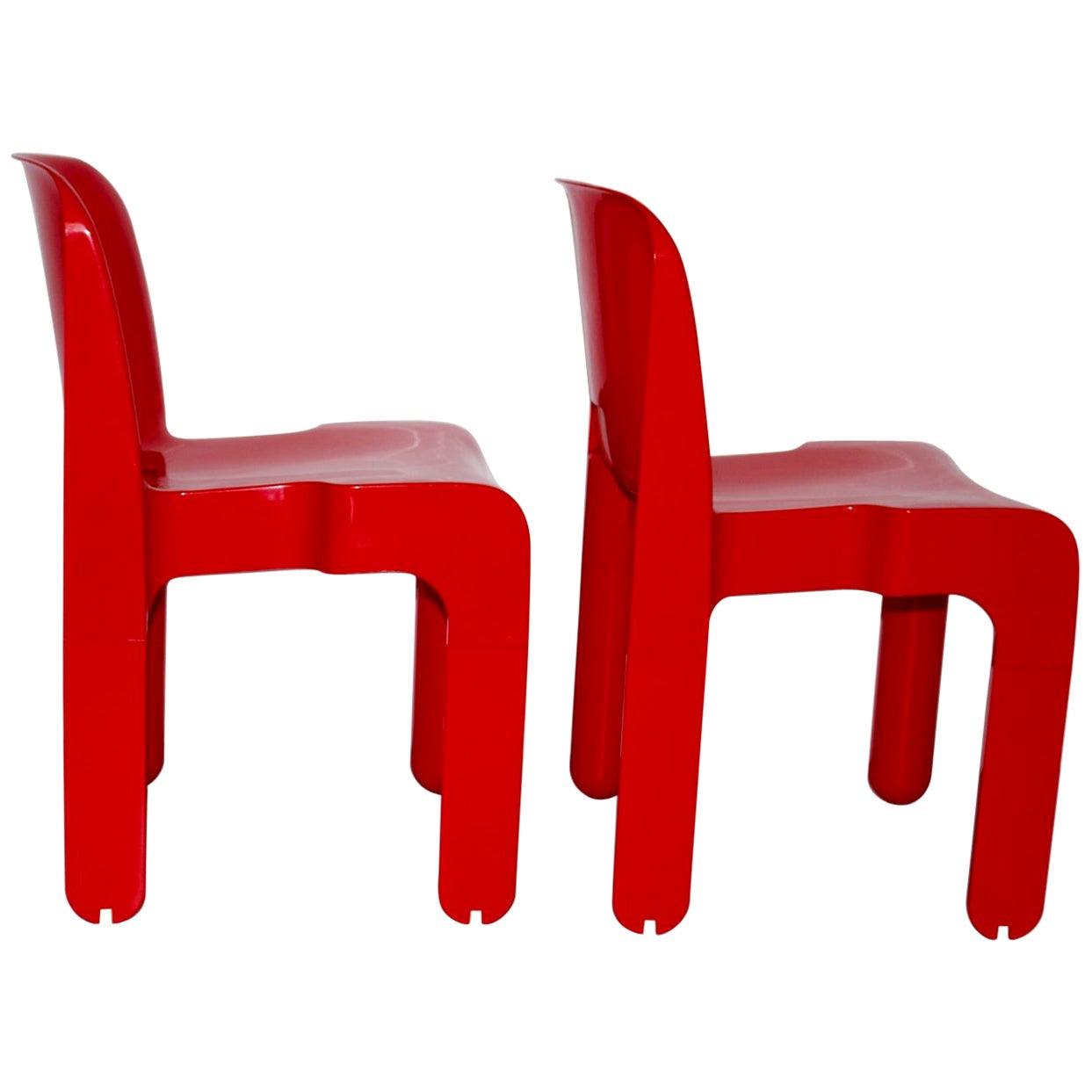 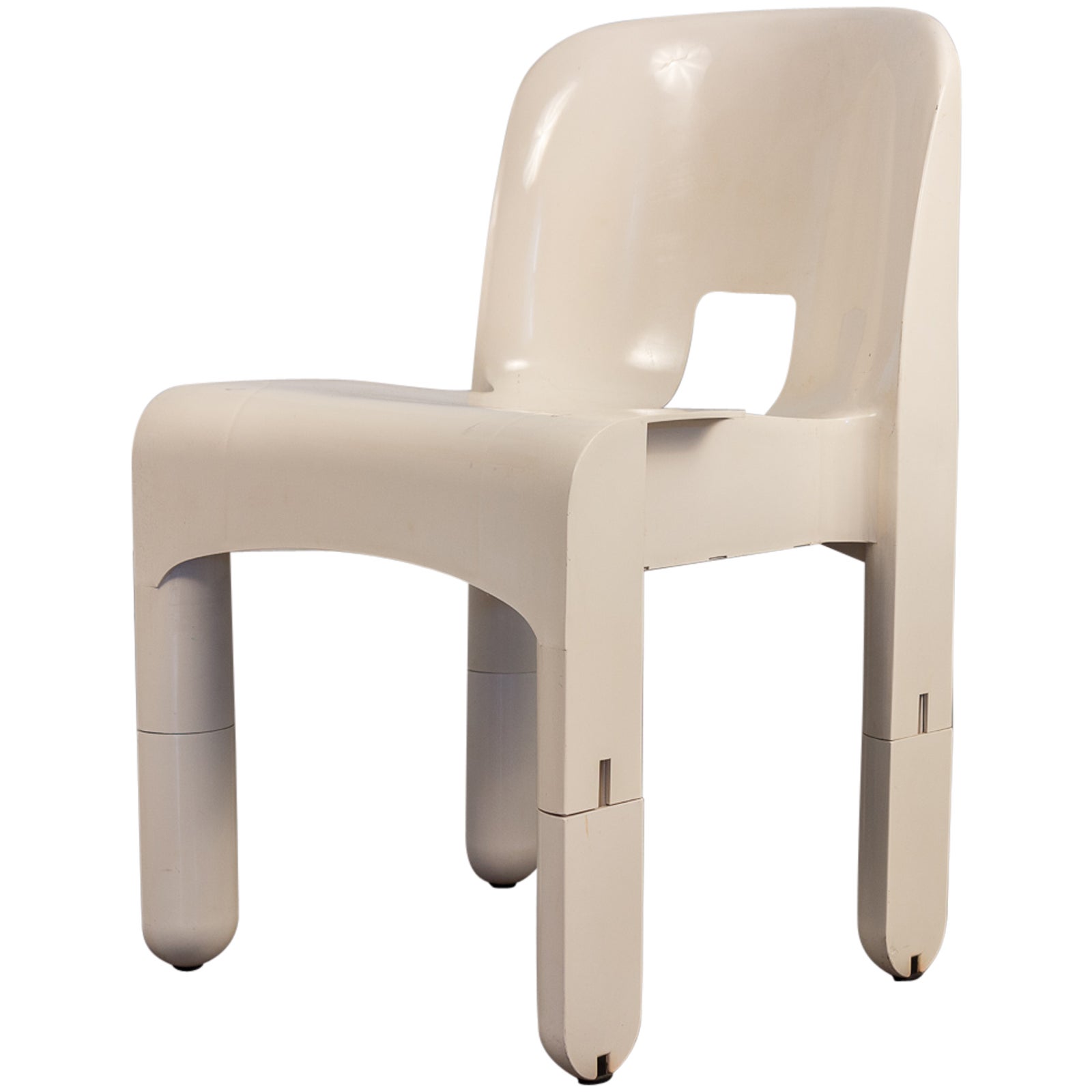 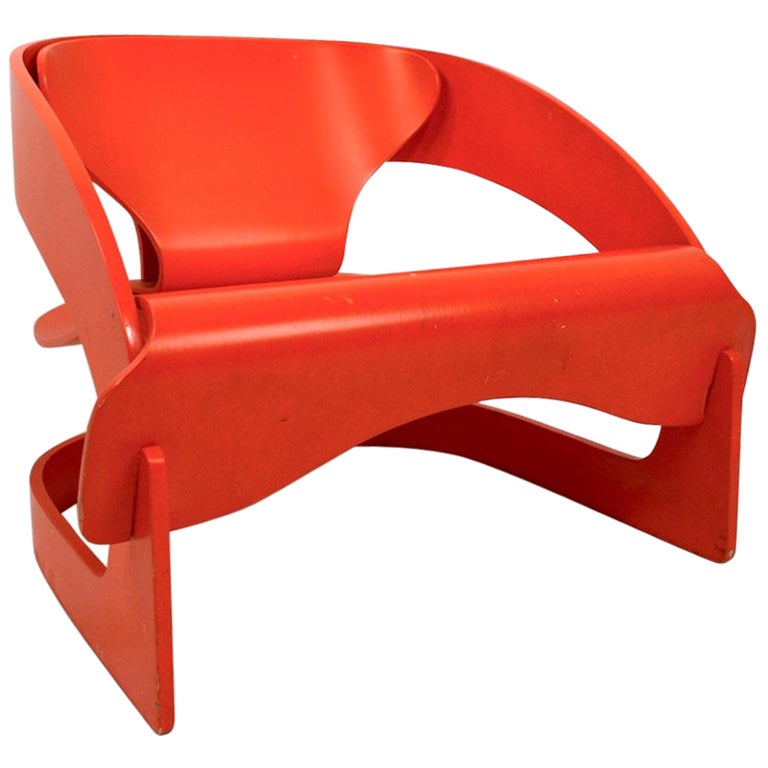 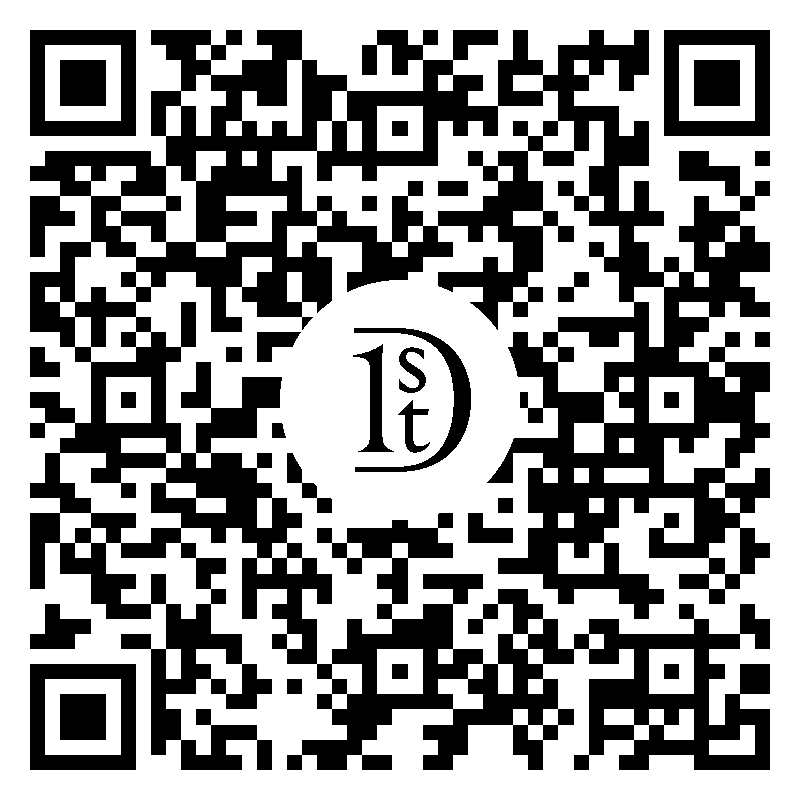 Here we have a set of four extremely rare, first edition, Joe Colombo 'universale' chairs in the also extremely rare burgundy color, this is a set for serious collectors and enthusiasts who appreciate the rarity and historical significance of this set. These very early production chairs are almost to be considered as prototypes as they were produced in this configuration for a very short period of time during this period when Kartell were struggling with the new injection moulding process and the tooling required for the moulds. These very early chairs are identified by the early type of ABS plastic that was used that has a unique candle wax type feel to its surface and is more pliable than the harder more glossy plastics used on the following series of chairs , the advantage is that these very early chairs do not suffer from problems with stress cracking that the later chairs suffered from over time. Other unique identifying marks of the very first series are the rectangular cutouts midway up the the legs and the moulding lines left in the surface of the plastic from the very early attempts at the tooling moulds for the brand new injection molding process that Kartell had invented for the production of these chairs (please refer to images 13-16 which highlight some of these early moulding marks, these early moulds were soon replaced and refined thereby removing these surface marks leading to a more perfect but less characterful chair.. In addition the front corners on the front of the seat on the first series cantilevered out over the upper longitudinal rails completely unsupported, by the third production series Kartell had redesigned the form so that the upper rail jutted out midway along its length to support the front corners of the seat . The 'universale' chair was the very first injection moulded chair in history and a true landmark in modern design hence it being included in the permanent collections of major institutions such as MOMA New York, the Victoria and Albert Museum, London, the Stedelijk museum,Amsterdam, the Musee des arts decoratifs,Paris and the Metropolitan museum of art , New York.. The 'universale' chair won the 'compasso d'oro' Gold Medal prize for design in 1970 just a year before Joe Colombo's tragic death in 1971 at the age of 40. Colombo's 'universale' chair was originally intended to have been fabricated from pressed aluminum sheet but the huge projected cost and the new plastic technology led them to rethink the design . The chairs were designed by Colombo in 1965 but it was not until Autumn of 1967 that the first chairs were actually realised due to severe teething problems with the new injection moulding technology and process , tooling, moulds ,suitable type of plastic etc. The ingenuity of the design also included features such as the legs were split into two separate interlocking sections allowing fpr maximum flexibility in seating height , the lower section of the leg was demountable and could easily and quickly be replaced by slotting in lower leg sections of varying lengths, from the the shortest for children, a medium length for adult chairs and the longest for tall bar chairs, The earliest publication that I have managed to find which documents this early form of the 'unversale' chair is the November 1967 issue of 'Domus' which illustrates the chair with the lower children's height feet installed (please see images 10 and 11) An early first edition chair ,already deemed a Classic in 1970 , featured in the catalog of the Whitechapel art gallery's famous 1970 exhibition in London documenting the history of the modern chair titled, 'Modern chairs 1918-1970', the first edition 'universale' chair photographed in the catalog had been lent for the exhibition by the Victoria and Albert museum in London. Please see image 2. There is also a Classic black and white photo, taken in the late 1960s ,of Joe Colombo relaxing in his 'Elda' lounge chair at his home in Milan with a first series ;universale' chair in the right foreground (please see image 12) This is an extremely rare opportunity to acquire a significant piece of modern chair design history. Literature: 'Domus'. November 1967, page 40, illustrates this very early form of the 'universale' chair with the children's height lower leg section installed.. (pleaas see images 10 and 11) 'MODERN CHAIRS: 1918-1970' exhibition catalog, Whitechapel Art gallery London in collaboration with the Victoria and Albert museum London, July -August 1970, page 61, See IMAGE 2 which illustrates exactly this form with the adult height lower leg section installed. 'I Colombo', Vittorio Fagone, Mazotta, 1995 , page 62 (black and white photo showing Joe Colombo relaxing in his 'Elda' lounge chair at his home in Milan with a first series ;universale' chair in the right foreground.

Portability and adaptability were keynotes of many Colombo designs, made for a more mobile society in which people would take their living environments with them. One of his most striking pieces is the Tube chair (1969). It comprises four foam-padded plastic cylinders that fit inside one another. The components, which are held together by metal clips, can be configured in a variety of seating shapes. Tube chairs generally sell for about $9,000 in good condition; Elda chairs for about $7,000. A small Colombo design such as the plastic Boby trolley — an office organizer on wheels, designed in 1970 — is priced in the range of $700. As Colombo intended, his designs are best suited to a modern decor. As you see on these pages, if your tastes run to sleek, glossy Space Age looks, the work of Joe Colombo offers you a myriad of choices. 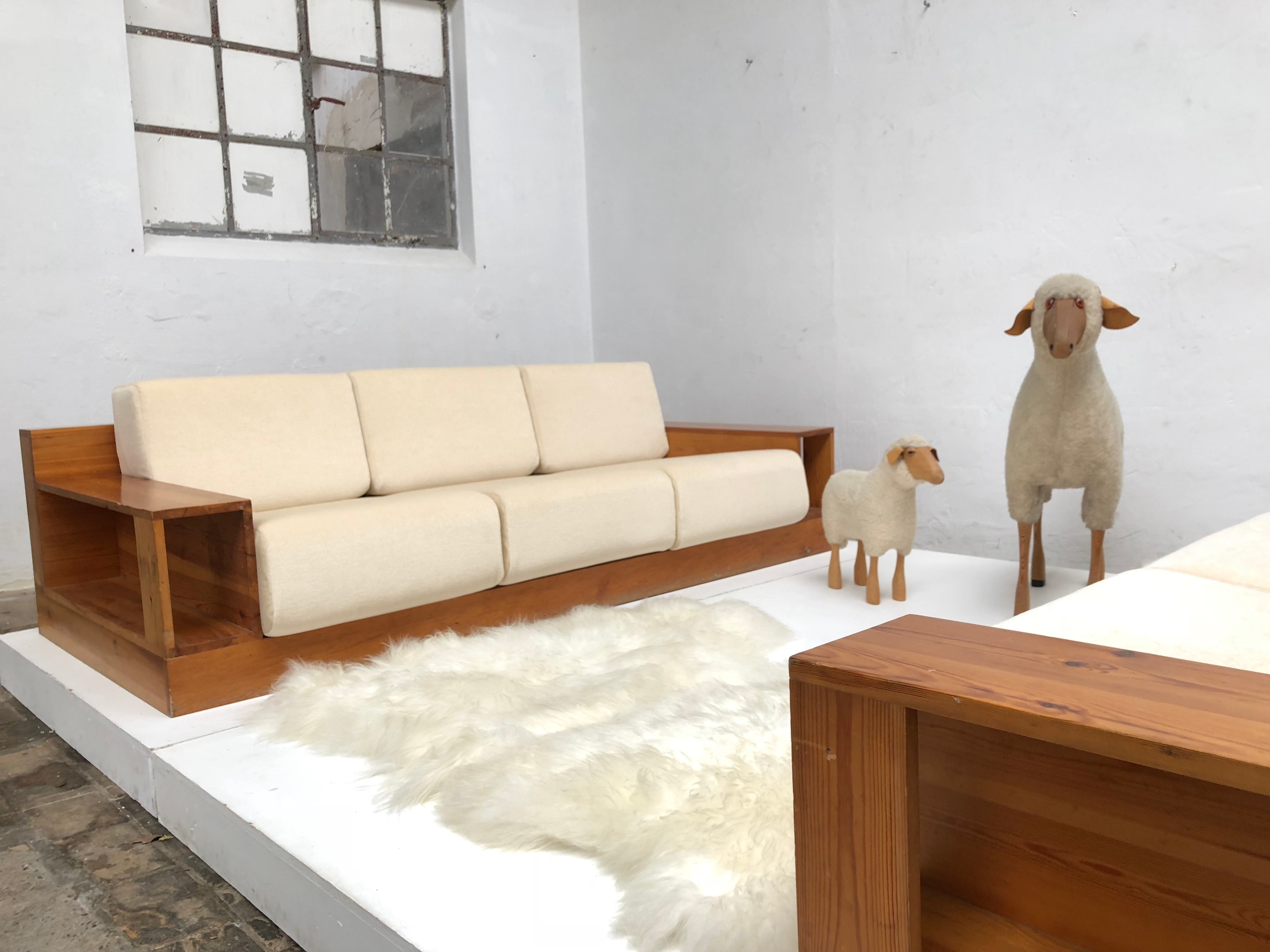 About the Seller
4.8 / 5
Located in bergen op zoom, Netherlands
Platinum Seller
These expertly vetted sellers are 1stDibs' most experienced sellers and are rated highest by our customers.
Established in 1999
1stDibs seller since 2012
229 sales on 1stDibs
Typical response time: <1 hour
More From This Seller
View All From Seller