Size: 12 medium
Balenciaga haute couture black dress, circa 1960
Located in London, GB
A beautiful example of Balenciaga's mastery, this couture dress is from his 'Eisa' label, the Spanish arm of his haute couture atelier. Constructed in fine black silk chiffon and sil...
Category 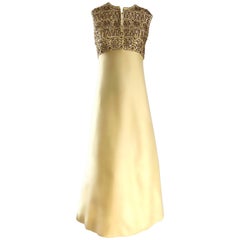 1960S Blue & White Haute Couture Silk Duchess Satin Cut Velvet Gown With Bows
Located in New York, NY
This gown is made from some of the most expensive fabric one could ever buy. The rich silk has been woven into a luscious duchess satin. Then the silk is delicately cut on the surfac...
Category

L 60 in.
Carrie Couture 1960's Gold and White Velvet and Lurex Chiffon Dress with Jewel
By Carrie Couture
Located in New Hope, PA
What a glamorous cut velvet and lurex on chiffon dress with polka dots in many sizes. The white ones are cut velvet, some edged with gold lurex thread that is used for the velvet edg...
Category

Size: Medium
A Vintage 1960s Cresta Couture Dress
Located in London, GB
A chic dress by Cresta Couture. This easy to wear dress is in a navy blue and pink fabric, with a self fabric belt. The dress has two pleats at the front and a side zip opening.
Category

Size: 12
Vintage Ronerg Couture Sky Blue Jersey Gown
Located in London, GB
A wonderful jersey drape vintage jersey gown by Ronerg Couture. The dress has a v neckline and backline with plait detail over the bodice,ad gathering at the skirt. Measurements: B...
Category

L 56 in.
Vintage Anna Clay Couture Halter Neck Gown
Located in London, GB
A vintage halter neck gown by Anna Clay Couture. The dress is in a brocade like fabric with button fastening at the neck and a central back zip. It has bow detail and bust leval.
Category

Surely you’ll find the exact vintage or contemporary 1960s couture gown you’re seeking on 1stDibs — we’ve got a vast assortment for sale. Black is a pretty popular color, but we also have Beige, Gray, Brown and more in stock now. Finding the perfect 1960s couture gown may mean sifting through those that were made during different time periods — popular versions were made as early as the 20th Century and a newer one, made as recently as the 21st Century, can also be found on the site. Making an accessory such as this has likely been a part of the legacy of many fashion designers, but those produced by Christian Dior, Pierre Balmain and Pierre Cardin are consistently popular. When shopping for these accessories, you’ll find that there are less available pieces for men or unisex today than there are for women.