H 63 in. W 41.74 in. D 16.15 in.
Antique Marquetry Wooden Buffet Cabinet
Located in High Point, NC
This antique buffet features ornate marquetry in a distinctive, geometric design of contrasting woods. Made in Belgium in the 1880s, it features two drawers and a pair of doors which...
Category

H 39.2 in. W 46.5 in. D 23 in.
Antique German Painted Buffet Cabinet
Located in Dallas, TX
Super look!! Crafted in Germany circa 1900, this buffet cabinet has a wonderful multi-color painted finish with a trending distressed appearance. Exceptional relief carvings on the c...
Category 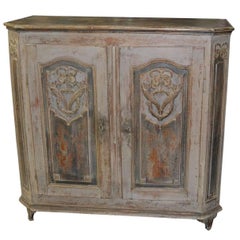 H 52 in. W 37.5 in. D 16 in.
Antique Gilt Bronze Mounted Vitrine Cabinet
Located in London, GB
This large and grand vitrine cabinet is executed with precision and skill, and would make a well-appointed addition to any refined, luxury interior. The vitrine is of rectangular...
Category

H 47.5 in. W 36.5 in. D 16.5 in.
Antique English Mahogany Display Cabinet, circa 1900
Located in Chicago, IL
Beautiful antique English solid mahogany curio or vitrine cabinet. We found this unusual display cabinet in the town of Leek, England from one of our favorite English antique dealers...
Category

H 31.5 in. W 39.5 in. D 18 in.
Antique French Oak Vitrine/Cabinet, circa 1890
Located in Round Top, TX
Lovely curves and carvings accentuate this striking oak Vitrine or display cabinet from France. Note the carved details of birds and flourishes between the lower cabinet doors, and a...
Category

H 108.27 in. W 59.06 in. D 23.63 in.
Pair of Brass Antique French Vitrine Display Cabinets
Located in Surbiton, Surrey
A pair of antique vitrines. France, early 20th century. Brass, glass and oak bases. The bases can be removed. The shelves are adjustable. Mirrored back and base. Pr...
Category

H 55 in. W 28 in. D 13 in.
Italian Antique Solid Wood Cabinet Showcase, Earlier 1900
Located in MIlano, IT
Cabinet showcase in solid wood dating to the earlier 1900. Coffered molding, molded glass door. There is a burnished rock and the shelves inside are adjustable. Original and good con...
Category

H 65 in. W 27 in. D 10 in.
Antique Ivory Painted Glazed Oak Cabinet or Vitrine
Located in Casteren, NL
A beautiful rustic German two-door painted two-door cabinet. This cabinet is made in oak and has three panels per side. The doors have glass panels, showing the interior of the cab...
Category

H 77.37 in. W 48.43 in. D 21.26 in.
Antique Ebonized Wood, Gilt Bronze and Hardstone Cabinet
Located in London, GB
This cabinet is an exquisite piece of antique furniture, which is crafted from beautifully-contrasting ebonised wood, golden gilt bronze (ormolu) and colourful hardstones. The ca...
Category

H 44.89 in. W 67.72 in. D 21.66 in.
Inlaid Antique Display Cabinet, France, circa 1880, After Renovation
Located in Chorzów, PL
A historic vitrine from the end of the 19th century. Furniture in very good condition, after professional renovation, polished to high gloss. Dimensions: Height 159 cm, width 80 c...
Category

H 62.6 in. W 31.5 in. D 16.54 in.
Antique Chiffonier, English, Mahogany, Sideboard, Cabinet, Victorian, circa 1880
Located in Hele, Devon, GB
This is an elegant antique chiffonier. An English, mahogany sideboard cabinet, dating to the Victorian period, circa 1880. Beautifully figured with attractive craftsmanship Displ...
Category

H 49.22 in. W 41.93 in. D 16.74 in.
Antique Highly Carved Pine Cupboard Cabinet Buffet from Denmark
Located in Round Top, TX
The ornate carving is captivating on the panel doors of this original pine corner cabinet. The turned columns and mirror back splash add a dramatic touch as well. The entire cupboard...
Category

H 46.07 in. W 28.35 in. D 24.02 in.
Antique English Country Buffet Cabinet with Original Red Paint
Located in South Salem, NY
Stunning provincial buffet cabinet with historic red paint intact, made in England circa the late 19th century. The original red paint has aged beautifully over the years into a deep...
Category

H 36.23 in. W 72.05 in. D 24.02 in.
Antique French Mahogany Circular Display Cabinet with Bronze Trim
Located in New Orleans, LA
This is a very beautiful display cabinet and it has a marble top.
Category

H 59 in. Dm 25.50 in.
Emerald Green Chinese Cabinet Inset with Gilt Antique Panels
Located in Chicago, IL
According to the original owner's family, this cabinet was constructed in the 1950s. 19th century carved gilt panels were incorporated into the design, a la James Mont.
Category

H 36.03 in. W 59.85 in. D 20.08 in.
French Antique Art Nouveau Carved Walnut Server Buffet Cabinet
Located in Shippensburg, PA
An exquisitely carved buffet cabinet from the Art Nouveau period during the first quarter of the 20th century, this is part of a larger matched suite of dining room pieces we acquire...
Category

H 72.45 in. W 42.52 in. D 15.75 in.
Pair of Antique Ebonized Wood Boulle Marquetry Vitrine Cabinets
By André-Charles Boulle
Located in London, GB
This pair of cabinets will add grandeur to an interior space. Impressively tall, each cabinet is made up of a lower closed cabinet and an upper glass-fronted display cabinet. The low...
Category

H 59 in. W 25.5 in. D 17.5 in.
Antique Buffet, Scottish Server Cabinet, Mahogany, Mid-Victorian, circa 1870
Located in Hele, Devon, GB
This is an antique buffet, a Scottish server cabinet in mahogany dating to the mid-Victorian period, circa 1870. Pleasingly patinated and good color throughout Deep russet tones ...
Category

H 51.19 in. W 48.04 in. D 20.08 in.
Antique Display Cabinet, English, Walnut, Bronze, Showcase, Museum, circa 1900
Located in Hele, Devon, GB
This is an antique display cabinet. An English, walnut and bronze showcase of museum quality and dating to the late 19th century, circa 1900. Generous proportion and with a desirabl...
Category

H 66.93 in. W 36.62 in. D 18.51 in.
Hardstone, Brass and Ormolu Mounted Ebonized Wood Antique Vitrine Cabinet
Located in London, GB
The very fine ebonized wood Napoleon III period cabinet with central door decorated with a Pietra Dura depiction of an urn with fruit and flowers and a bird, surrounded by an ormolu ...
Category

H 45.67 in. W 69.49 in. D 17.33 in.
Brass Bound Antique Mahogany Display Cabinet with 7 Drawers and 3 Glass Shelves
Located in West Palm Beach, FL
This unusual compact display or collector's cabinet is quite unusual. There is the main display area on the top which can be accessed from the back. The front brass bound glass door ...
Category

H 70 in. W 30 in. D 15 in.
Shabby Chippy White Painted Antique 1840s Era Gustavian Swedish China Cabinet
Located in Swedesboro, NJ
This is a great piece for the right person. If you are looking for a shabby chic primitive cabinet that is antique. This is for you. Look at the chipping white antique paint! Great c...
Category

H 79.5 in. W 49 in. D 27 in.
Edwardian Style Antique Cabinet, 19th Century Burled Walnut with Marquetry
Located in Houston, TX
Antique burled walnut cabinet in lovely condition with side opening glazed doors for display. The center door opens with original locks for storage. The cabinet has been polished an...
Category

H 44 in. W 66 in. D 17 in.
Edwardian Style Antique Cabinet, 19th Century Burled Walnut with Marquetry
Located in Houston, TX
Antique burled walnut cabinet in lovely condition with side opening glazed doors for display. The center door opens with original locks for storage. The cabinet has been polished an...
Category

H 59.06 in. W 22.45 in. D 13.39 in.
French Antique Hunt Cabinet, circa 1870 in Walnut and Marble Top
Located in Houston, TX
Handsome exquisitely carved hunt cabinet, hand carved with fish and fowl, fruit and nuts. The cabinet is gracefully curved with four doors which exhibit a Black Forest type carving....
Category

French Antique Hunt Cabinet, circa 1870 in Walnut and Marble Top

H 42 in. W 77 in. D 25 in.
Antique English Rococo Revival Cabinet Server Buffet Deux Corps, circa 1880
Located in Shippensburg, PA
A very finely carved and crafted buffet deux corps from the last quarter of the 19th century, it is English but designed in the taste of the French with the heavy influence of Rococo...
Category

Glass Cabinet of Light Walnut, in Great Antique Condition from the 1880s

H 68.31 in. W 53.94 in. D 22.45 in.
Davidson's '70s Inspired, Palisades Side Cabinet in Turquoise and Antiqued Brass
By Davidson
Located in London, GB
An exquisite side cabinet finished in a gorgeous high gloss bird’s-eye maple hand tinted in a dusky shade of blue. The cabinet has three swing out doors which open on push catches wi...
Category

How Much are Antique Dining Cabinet?

Prices for an antique dining cabinet can differ depending upon size, time period and other attributes — at 1stDibs, they begin at $225 and can go as high as $148,500, while the average can fetch as much as $4,234.