H 76.78 in. W 48.43 in. D 22.05 in.
Ivo Blue Cabinet by Chiara Provasi
By Chiara Provasi
Located in Milan, IT
Handcrafted in oak, the Ivo blue cabinet stands proudly on six bronze legs and features a cool ash gray finish. In blue faux leather with checked embroidery, the cabinet opens to rev...
Category

H 86.62 in. W 25.6 in. D 21.66 in.
Rocky Credenza Painted Metal, Blue
By La Chance
Located in Beverly Hills, CA
Rocky is a sculptural piece. It can be used as a console or a credenza but will also accommodate books and objects to become the most graphic display or bookshelf. Designer Charle...
Category

H 64 in. W 36 in. D 22 in.
Mid Century Modern Nightstand Side Table in Painted Metal Industrial Cabinet
Located in Framingham, MA
Small Medical Industrial Cabinet. Can be used for a small space or single nightstand. Hand painted - some paint flaked off.
Category

Vintage Dentist Cabinet in Lacquered Metal and Opaline Glass, circa 1950

H 35.44 in. W 31.5 in. D 16.93 in.
Oporto Cabinet in Blue with Silver Leaf Finish
By Boca Do Lobo
Located in New York, NY
Intricately designed, this cutting edge piece was inspired by our city and the rhythmic undulating of its black slate rooftops and building facades. Through reflection ingredients su...
Category

H 82.68 in. W 43.71 in. D 20.08 in.
01.03 Collection Blue Bar Cabinet
By Aliprandi Valentino Design
Located in Milan, IT
Designed by Italian architect Davide Rizzo in collaboration with AVD, this magnificent bar cabinet has a vintage allure and showcases an unparalleled attention to detail and masterfu...
Category

H 106.3 in. W 80.71 in. D 19.69 in.
Kramer Large Vertical Cabinet in Intense Blue Lacquered Frame by E-GGS
By E-GGS, Miniforms
Located in Brooklyn, NY
Vertical version of Kramer vitrines, with leather handles. Available in two different heights and sizes, it tells stories to the domestic living by interacting with the transparencie...
Category

H 70.87 in. W 50.01 in. D 17.33 in.
Teca Bar Cabinet
By Da A
Located in Milan, IT
A unique piece of refined sophistication, this two-door bar cabinet is an elegant showcase of craftsmanship. Fashioned of steel, half of it is marked by a laser-cut work that reveals...
Category 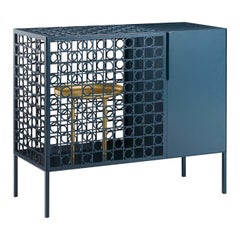 H 30.71 in. W 35.44 in. D 15.16 in.
Customizable Églomisé Blue Silver Glass Buffet with Metal Base by Ercole Home
By Ercole Home
Located in Brooklyn, NY
The Mystic buffet or credenza by Ercole home has a 6-door front, with Espresso wood finish on oak. Hand-painted glass panels in Midnight Moon are on the door surface. The decorativ...
Category

H 36 in. W 96 in. D 20 in.
Meraviglia 2-Door Cabinet by De Rosso
By De Rosso
Located in Milan, IT
This sideboard by Paola Navone is included in a limited-edition collection of seven pieces by five international designers, an ambitious project by Roberto De Rosso including re-edit...
Category

H 30.71 in. W 30.32 in. D 8.27 in.
Thomas Eriksson Cross Cabinet with Glossy Varnished Finish for Cappellini
By Thomas Eriksson, Cappellini
Located in New York, NY
Designed to store medicine, the cross cabinet by Thomas Eriksson is wall-hanging, available with a glossy varnished finish, in red, orange, green, blue and white. Made of laser-cut ...
Category

+ 1 more
H 17.72 in. W 17.13 in. D 6.11 in.
Metal Wall Unit in Red, Yellow and Blue by Tjerk Rijenga for Pilastro, 1950's
By Pilastro, Tjerk Reijenga
Located in Steenwijk, NL
This is a stunning composition of different elements in a Pilastro wall unit. A diverse collection of different parts selected to make a complete unit of the famous design by Tjerk R...
Category

H 23.04 in. W 26.97 in. D 16.93 in.
'A' Room Divider, Minimal Steel Metal Shelving
By &New
Located in Leicester, GB
Modern freestanding shelves unit for books, objects and plants. The shelves are designed to look delicate and airy but strong. The straight back design sits neatly against a wall or ...
Category

H 20.48 in. W 47.25 in. D 10.24 in.
Sorcier Wall Light Blue, Gold
By La Chance
Located in Beverly Hills, CA
Sorcier is a wall light inspired by the ritual Ngil masks of the Fang tribe in Gabon. The light diffuses through the perforations in the mask and shines upward in a graphic and gentl...
Category

H 18.31 in. W 8.67 in. D 4.93 in.
Contemporary Sideboard by Hessentia in Marble and Leather, Light-Blue
By HESSENTIA, Cornelio Cappellini
Located in Carate, Brianza (MB)
The four-doors version of Morgan storage unit represents an interesting proposal for the dining area. Its doors are shaped three-dimensionally with vertical decorative motif and upho...
Category

Contemporary Sideboard by Hessentia in Marble and Leather, Light-Blue

H 30.71 in. W 98.43 in. D 19.69 in.
Blue Wood Rustic Decorative Trunk in Fané Style
By Fane
Located in Milano, IT
Fabulous painted wooden decorative trunk box from the Rustic Chic period of the early 1920s, made in Italy. The trunk can also be placed in the Fané style. The box are small in size...
Category

H 37.01 in. W 78.75 in. D 18.9 in.
French Painted Wood Buffet in Pale Blue with Gold, Green and Beige Trim
Located in Atlanta, GA
A French 18th century painted wood buffet. This French antique painted wood buffet features a single drawer over two doors. The panels on the doors have been delicately carved. There...
Category

+ 2 more
H 71 in. W 31 in. D 15 in.
USM Shelving Q118 Storage System
By Paul Schaerer, Usm Haller, Fritz Haller
Located in New York, NY
Offered by M2L. With two drop down doors, cable cut out and one drawer. Designed by Swiss architect Fritz Haller and Paul Schaerer in 1963. Made from powder coated steel and chrom...
Category

+ 2 more
H 71 in. W 60 in. D 15 in.
USM Haller Mid Credenza DF Storage System
By Paul Schaerer, Fritz Haller, Usm Haller
Located in New York, NY
Offered by M2L. With one drop down door and one extension door with filing. Designed by Swiss architect Fritz Haller and Paul Schaerer in 1963. Made from powder coated steel and c...
Category

+ 2 more
H 17 in. W 60 in. D 15 in.
USM Haller Pedestal M Storage System
By Usm Haller, Fritz Haller, Paul Schaerer
Located in New York, NY
Offered by M2L. With one 6" drawer and one 14" filing drawer and casters. Designed by Swiss architect Fritz Haller and Paul Schaerer in 1963. Made from powder coated steel and chr...
Category

+ 2 more
H 24 in. W 17 in. D 21 in.
Usm Haller Storage C1A18 Storage System
By Paul Schaerer, Usm Haller, Fritz Haller
Located in New York, NY
Offered by M2L. With one drop down door and one drawer. Designed by Swiss architect Fritz Haller and Paul Schaerer in 1963. Made from powdercoated steel and chrome-plated steel t...
Category

+ 2 more
H 29 in. W 30 in. D 15 in.
USM Haller Side Table 0118
By Usm Haller, Fritz Haller, Paul Schaerer
Located in New York, NY
Offered by M2L. With one drop down door. Designed by Swiss architect Fritz Haller and Paul Schaerer in 1963. Made from powder coated steel and chrome-plated steel tubes, the USM H...
Category

+ 2 more
H 26 in. W 60 in. D 15 in.
USM Haller Media O2 Storage System
By Paul Schaerer, Usm Haller, Fritz Haller
Located in New York, NY
Offered by M2L. With two drop down doors and one cable cut out. Designed by Swiss architect Fritz Haller and Paul Schaerer in 1963. Made from powder coated steel and chrome-plated...
Category

H 33 in. W 76.5 in. D 22 in.
Rococo Style Bombé Chest of Four Drawers with Grey, Blue, Green & Beige Accents
Located in Atlanta, GA
An American Bombé style painted wood chest. This American Bombé chest from the late 20th century is ornately decorated with a shell carving on the skirt and cartouche outline around ...
Category

How Much is a Blue Metal Cabinet?

A blue metal cabinet can differ in price owing to various characteristics — the average selling price 1stDibs is $2,925, while the lowest priced sells for $275 and the highest can go for as much as $28,680.

What Exactly Is a Secretary Desk, and What Is It Used For?

The furniture equivalent of a Swiss Army knife, it's the multifunctional piece you didn't know you needed.