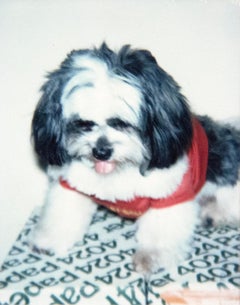 H 4.25 in. W 3.375 in.
Dog
By Giacomo Brunelli
Located in Santa Monica, CA
Giacomo Brunelli uses a 35mm camera and photographs from a low angle, which allows him to get up close to his subjects. Printing the images small and in black & white, and retaining ...
Category 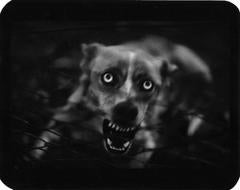 H 17 in. W 20 in.
Red Dog
By William Wegman
Located in Palm Desert, CA
A C-Print by William Wegman. "Red Dog" is a C-Print depicting an iconic Wegman dog, sitting in a city park scene looking at a bench by contemporary photographer William Wegman. Editi...
Category

H 29 in. W 43 in.
Dog Shoes
By Ted Adams
Located in New York, NY
Listing is for UNFRAMED print. Inquire within for framing. Edition of 25. If the exhibition piece is sold or the customer orders a different print size, the photograph is produced...
Category 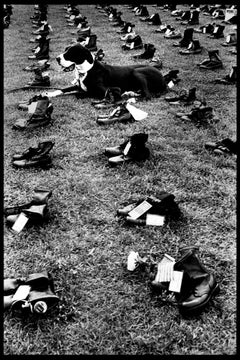 H 14 in. W 11 in.
Watch Dog
By Cig Harvey
Located in Sante Fe, NM
You an Orchestra You a Bomb explores the photographer’s relationship with life itself. It is a series about paying attention to and appreciating the fragile present. You an Orchestra...
Category

H 14 in. W 14 in.
Yellow Dog
By Mitchell Funk
Located in Miami, FL
Signature: signed dated lower right signed dated and numbered verso 2 /15 Powerful and unexpected graphic shows that street photography does not have to be gritty or about social is...
Category

H 29 in. W 43 in.
Dog Willow
By Giacomo Brunelli
Located in Santa Monica, CA
Giacomo Brunelli uses a 35mm camera and photographs from a low angle, which allows him to get up close to his subjects. Printing the images small and in black & white, and retaining ...
Category

H 9.5 in. W 12 in.
Dog and Coffin
By Keith Carter b.1948
Located in Sante Fe, NM
Described as a "Poet of the Ordinary," Keith came of age during the turbulent sixties and seventies, developing a singular, haunting style of photography celebrating the human spirit...
Category

H 15 in. W 15 in.
Green Dog Yellow Dog, Animal Photography by Mitchell Funk
By Mitchell Funk
Located in Miami, FL
Green Dog is photographed so that it is representational and abstract at the same time. The photograph is signed dated, numbered, 3/15 lower right, another size available. Unframed...
Category

H 29 in. W 43 in.
Hot Dog Peonies
By Natasha Martin
Located in New York, NY
ABOUT THIS ARTIST: Natasha Martin is an LA-based photographer who loves color and infusing dreamy-nostalgia into her work. She has created work for Prada, Miu Miu, and 24 Sèvres, and...
Category

H 11 in. W 14 in.
Woman, Dog, Bed
By Robert Stivers
Located in Sante Fe, NM
Staging Pictures: Early Polaroids focuses on Stivers' working Polaroid prints, shot with a Hasselblad Polaroid back for instant proofing of lighting and composition of his subjects. ...
Category

H 22.75 in. W 22.75 in. D 1.25 in.
Rollin and His Dog
By Jeffrey Silverthorne
Located in Dallas, TX
Signature, title, date and print type in pencil on verso. Vintage gelatin silver print Jeffrey Silverthorne, born in 1946 in Honolulu, Hawaii, is an American photographer known for ...
Category

Jeffrey Silverthorne
Rollin and His Dog, 1971

H 29 in. W 43 in.
Dog Walking at Sunset
By Dale Johnson
Located in Carmel-by-the-Sea, CA
Signed, stamped, dated and number on back of print. Edition of only 15.
Category

H 44.49 in. W 64.77 in.
The Power Of The Dog
By David Yarrow
Located in Chicago, IL
The Power Of The Dog The Rocky Mountains - 2022 Archival Pigment Print on 315gsm Hahnemühle Photo Rag Baryta Paper Each is signed, dated and numbered on the front. Edition Size: ...
Category

H 42 in. W 79 in. D 2 in.
And His Dog, Brazil, 1997
By Barnaby Hall
Located in New York, NY
ABOUT After 30 years of only exhibiting fine art photography, the Robin Rice Gallery is pleased to present a group exhibition featuring a selection of her gallery photographers and t...
Category

H 14 in. W 11 in.
Jumping Dog in Golden Light
By Mitchell Funk
Located in Miami, FL
Dogs are a wonderful and joyful gift to us all. ln a continuing series, Mitchell Funk explores the dog's playful nature and captures it in dramatic early morning light. The magic...
Category

H 4.5 in. W 3.5 in.
Surf Dog, Montauk, New York
By Michael Dweck
Located in New York, NY
This photograph is in an edition of 10 and is signed by the photographer.
Category

H 29 in. W 43 in.
Dog Cut Out, Cocodrie, LA
By William Greiner
Located in Dallas, TX
AP Signed by artist. 37 x 25 in. white frame included. William Greiner is an American photographer who photographs found public and domestic scenes in color film. He began as a spor...
Category

H 30 in. W 40 in.
Woman with Dog in Forest
By Wynn Bullock
Located in Carmel-by-the-Sea, CA
Signed on the front of the mount. Printed in the 1960's.
Category

H 7.5 in. W 9.5 in.
Brigitte Bardot (Bed with Dog)
By Terry O'Neill
Located in Greenwich, CT
Terry O’Neill is one of the world’s most collected photographers with work hanging in national art galleries and private collections worldwide. From presidents to pop stars he has ph...
Category

H 30 in. W 20 in.
05 from The Pekingese Dog Sitting
By Milton Greene
Located in Chatsworth, CA
This piece is a pigment print from the original negative, shot by Milton Greene in 1955. This photograph of Marilyn Monroe is from a photoshoot which became known as "The Pekingese D...
Category

H 24 in. W 16 in.
Get Updated with New Arrivals
Save "Dog Photography", and we’ll notify you when there are new listings in this category.

Dog Photography For Sale on 1stDibs

Find the exact piece of dog photography you’re shopping for in the variety available on 1stDibs. You can easily find an example made in the Modern style, while we also have 26 Modern versions to choose from as well. You’re likely to find the perfect item from our selection of dog photography among the distinctive items we have available, which includes versions made as long ago as the 20th Century as well as those made as recently as the 21st Century. Adding a choice in our collection of dog photography to a room that is mostly decorated in warm neutral tones can yield a welcome change — find a piece on 1stDibs that incorporates elements of gray, black, orange, blue and more. Finding an appealing object in our assortment of dog photography — no matter the origin — is easy, but Stefanie Schneider, Mitchell Funk, Michael Crouser, Giacomo Brunelli and Kurt Hutton each produced popular versions that are worth a look. These artworks were handmade with extraordinary care, with artists most often working in paper, silver gelatin print and photographic paper. A large option in this array of dog photography can be an attractive addition to some spaces, while smaller examples are available — approximately spanning 3.75 high and 3.375 wide — and may be better suited to a more modest living area.

How Much is a Dog Photography?

Questions About Dog Photography
Prices for most dog photography on 1stdibs are negotiable. You’ll see a "Make an Offer" button on the item details page, indicating that the seller is willing to consider a lower price. It’s not uncommon for customers to get 15–25% off the list price after negotiating. See our tips for negotiating like a pro.
Only experienced, professional sellers who have applied and been thoroughly vetted by our team of experts can sell dog photography and other quality items on our site. Learn more about becoming a 1stdibs seller.
The 1stdibs Buyer Protection Guarantee provides coverage for qualified purchases in the unlikely event that the item arrives not as described or is damaged. We’ll work with you and the seller to find a resolution, ensuring your satisfaction. View details
We have partnerships with the world's best shipping providers to facilitate seamless and fully-insured delivery from the seller's location directly to you, wherever you are in the world. Our logistics team is comprised of dedicated members who arrange all the details with our partners, servicing and supporting all shipments. Learn more about shipping on 1stdibs.
For your convenience, we offer multiple payment methods, including all major credit cards and PayPal. For many purchases we also offer financing options or wire transfer. Learn more about payment options on 1stdibs. 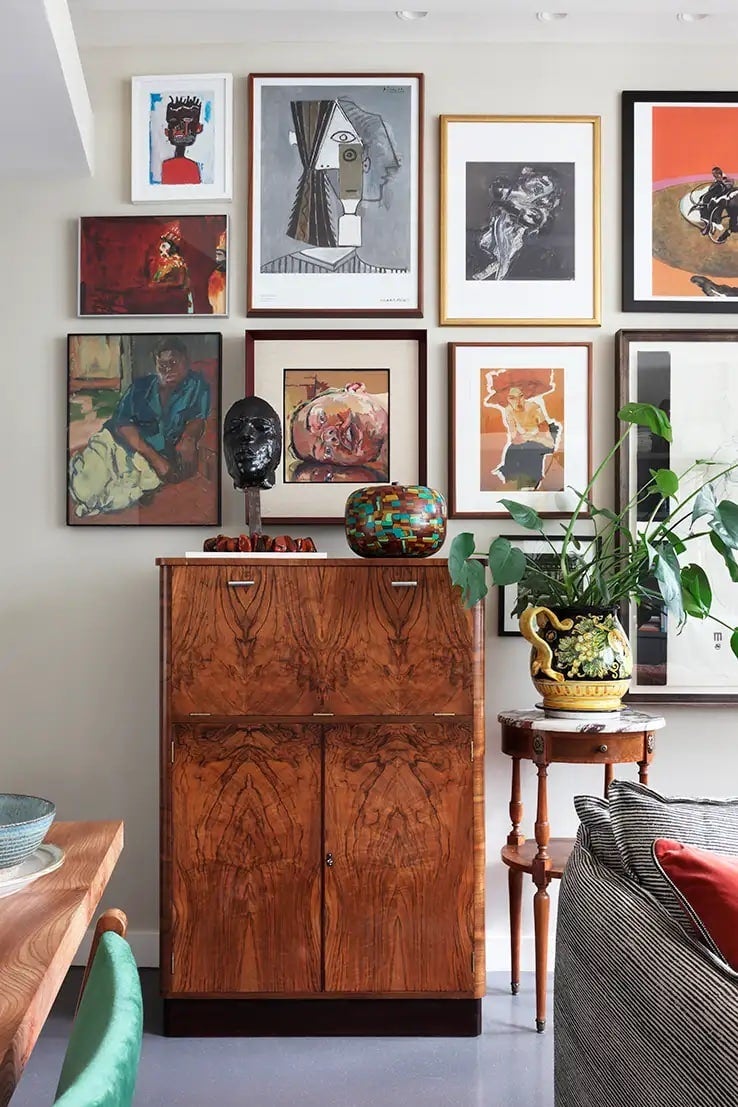