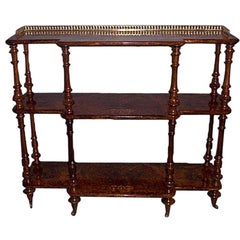 H 42 in. W 18.75 in. D 17.25 in.
English Bamboo Corner Etagere
Located in Sarasota, FL
This English 3-tiered Corner Étagère handmade of bMBOO in the "Japanned" lacquered panels style having hand painted flowers, leaves and birds on each shelf.
Category

H 38.75 in. W 26 in. D 18 in.
19th Century English Rosewood Étagère
Located in High Point, NC
19th century English étagère made from rosewood. The top is decorated with finials and a lovely scalloped gallery following down to three shelves, separated by hand-turned barley twi...
Category

H 50 in. W 16.88 in. D 14.88 in.
English Satinwood Cabinet or Étagère
Located in Wilson, NC
English satinwood cabinet or étagère, with satinwood being the primary wood, and all sides, doors, and shelves are crossbanded with mahogany. The crest, back, aprons, and door are in...
Category

H 50.75 in. W 25.5 in. D 13 in.
English Victorian Bamboo Corner Étagère
Located in Hudson, NY
This lovely small étagère is part of a large type of export furniture made from the sea trade between east and west cultures in the 19th centuries, circa 1870. The structure is of im...
Category

H 50 in. W 25 in. D 9 in.
19th Century English Mahogany Etagere
Located in High Point, NC
19th Century English mahogany etagere with wonderful fretwork around the top shelf, decorated with finials, following down to four lower shelves, with a drawer underneath. It has won...
Category

H 62.88 in. W 26.88 in. D 14.88 in.
English Edwardian Mahogany Four-Shelf Etagere
Located in Hudson, NY
This nice Edwardian étagère with four tiers has a great old color and patina. The piece made from mahogany in England circa 1880-1900 to appear like Regency versions and without mu...
Category

H 55.25 in. W 30.75 in. D 15.5 in.
Antique English Mahogany Etagere or Stand with Shelves
Located in London, GB
A fine Étagère'of the Regency Period Constructed in a well figured and patinated mahogany, with brass accents; rising from four ‘hairy paw’ feet, the three main tiers having radiu...
Category

H 74.5 in. W 32.5 in. D 17 in.
English Regency Period Mahogany Four-Tier Étagère with Drawer
Located in Wells, ME
English Regency period mahogany four tier étagère with drawer, ring turned supports and drawer in the bottom make these display shelves quite versatile. They will handsomely display ...
Category

H 74.25 in. W 24 in. D 17.5 in.
19th Century English Walnut Ètagerè And Music Shelf
Located in Haddonfield, NJ
Mid-19th century English walnut ètagerè and music stand Antique music stand / Etagere shelf, circa 1855-1860, made from walnut. The top is decorated with wooden finials and has tw...
Category

H 46.46 in. Dm 29.53 in.
English Regency Mahogany Library Stand / Étagère, Early 19th Century
Located in Charleston, SC
English four-tier library stand with one-drawer. This Regency étagère is solid mahogany and has turned column supports between the shelves and a Classic Marlborough leg below the dra...
Category

H 79 in. W 49.5 in. D 19.5 in.
Pair of 19th Century English Mahogany Early Victorian Étagère’s
Located in Hudson, NY
Unusual pair of étagères, made circa 1845-1850 in England in a round form are masculine and formal but not fussy or over decorated. The Mahogany color is warm and light not a deep re...
Category

H 30.2 in. W 15.25 in. D 15.25 in.
English 1840 Mahogany Étagère with Red Marble Top and Baluster Supports
Located in Atlanta, GA
An English mahogany free-standing étagère from the mid-19th century, with variegated red marble top and turned supports. Born in England during the first half of the 19th century, th...
Category

English Etagere For Sale on 1stDibs

How Much is an English Etagere?

Prices for an English etagere can differ depending upon size, time period and other attributes — at 1stDibs, they begin at $595 and can go as high as $32,500, while the average can fetch as much as $2,980.