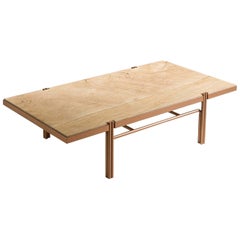 H 29.93 in. W 72.84 in. D 43.31 in.
Mathilde Gold Coffee Table
Located in Milan, IT
This elegant coffee table combines the traditional luxury of marble with the modern sophistication of metal for a modern piece that will add subtle elegance to any interior. The stun...
Category

H 15.75 in. Dm 35.44 in.
Ecate Gold Coffee Table
By Inthegarden
Located in Milan, IT
A splendid exercise in contrasts and balances, this coffee table flaunts a clean and essential design meticulously crafted of refined materials. Infusing a sophisticated flair in any...
Category

H 16.93 in. W 35.44 in. D 35.44 in.
Emera Gold Coffee Table
By Inthegarden
Located in Milan, IT
A bold and stately piece of functional decor, this coffee table will make a refined addition in any modern or contemporary living room or contract area. Inspired by the motifs of the...
Category

H 15.75 in. W 55.52 in. D 41.74 in.
Ecate Gold Coffee Table
By Inthegarden
Located in Milan, IT
Named after Hecate, the ancient Greek goddess of the waning moon, this round coffee table will make a stately statement in any decor. The cylindrical base equipped with tiny wheels i...
Category

H 16.15 in. W 40.95 in. D 25.99 in.
Plus White and Gold Coffee Table
By Tremolada
Located in Milan, IT
Seemingly simple, the plus coffee table is the perfect mix of clean lines and gentle curves, making it a truly stand out piece in any contemporary living space. Shown here with a lac...
Category

Plus White and Gold Coffee Table

H 14.18 in. W 35.44 in. D 35.44 in.
"Jael" Gold Coffee Table by Ivan Paradisi, Italy
By Ivan Paradisi
Located in Turin, IT
This exquisite coffee table was introduced at Milan Design Week 2019, Inspired by the Hebrew name (Ya'el) meaning "ibex, mountain goat" is meant as a sign of freedom, he who gets som...
Category

H 16.54 in. Dm 25.2 in.
French Resin and Glass Gold Coffee Table by Pierre Giraudon, 1970s
By Pierre Giraudon
Located in London, GB
Ellipse coffee table by the biologist and plastician artist Pierre Giraudon The table is made from crackled resin with inclusions of broken glass supported by two brass-plated cros...
Category

H 16.54 in. W 42.52 in. D 23.43 in.
Halston Coffee Table Gold
By Susan Hornbeak-Ortiz
Located in Laguna Niguel, CA
The Halston coffee table is a modern cocktail table made of gold leaf over iron with a carrara marble top. Inspired by jewelry this cocktail table is a real fashion statement for the...
Category

H 14.5 in. W 39.5 in. D 31.5 in.
Gold Dust Epoxy Resin Coffee Table
Located in Union City, NJ
Portray luxury and sprinkle some gold dust throughout your space with the Altin Coffee Table. This piece is a great modern addition to your living room, den or even office! With real...
Category

H 21 in. Dm 24 in.
Gaby Coffee Table Gold Aluminium
By Chapel Petrassi
Located in Firenze, IT
Gaby is a multifunctional coffee table entirely covered by HPL aluminum. The manufacturing process and research on metal surfaces treatment and finishing allows to highlight the shin...
Category

H 19.69 in. W 27.56 in. D 17.72 in.
Vintage Gold Metal Coffee Table
Located in Livingston, NJ
Beautiful gold leaf over metal coffee table with a beveled glass top that sits into the frame. The design can blend into almost any room design with its clean lines and timeless feel...
Category

H 19 in. W 42.5 in. D 26 in.
Donald Coffee Table Monochrome Gold
By Chapel Petrassi
Located in Firenze, IT
Donald is a multifunctional table which has a sculptural and cosmic. Donald slots into the real space by interacting colors and forms in an astral dimension.
Category

H 18.51 in. Dm 27.56 in.
Eclipse Coffee Table in Gold Finish
Located in Paris, FR
Coffee table eclipse with base in metal in gold finish. With round clear glass top. Also available in side table.
Category

H 18.5 in. W 26 in. D 62 in.
Yves Klein Gold "Monogold" French Coffee Table
By Yves Klein
Located in Madrid, ES
Coffee table designed by prestigious French artist Yves Klein (1928-1962) model "Monogold". Made of gold leaf pieces inside a Perspex box, which sides and base are made of plexiglass...
Category

H 13.78 in. W 49.22 in. D 39.38 in.
CELINE COFFEE TABLE - Modern Coffee Table with Real Python Skin and a Gold Base
By Susan Hornbeak-Ortiz
Located in Laguna Niguel, CA
The Celine coffee table features layers of hand-carved bull nose white oak and real python skin floating above a gold leaf base. Fully custom and made to order in California. As show...
Category

H 14 in. Dm 41.25 in.
Gaby Coffee Table Rose Gold Aluminium
By Chapel Petrassi
Located in Firenze, IT
Gaby is a multifunctional coffee table entirely covered by HPL aluminum. The manufacturing process and research on metal surfaces treatment and finishing allows to highlight the shin...
Category

H 9.85 in. Dm 32.29 in.
Casiopee Coffee Table in Gold Finish
Located in Paris, FR
Coffee table casiopee with structure in gold finish, with beveled glass top up and down the coffee table.
Category

H 14.57 in. W 48.04 in. D 32.29 in.
White and Gold Square Coffee Table
By A.R. Arredamenti
Located in Milan, IT
This coffee table exudes refined sophistication in its sinuous and sleek silhouette enhanced by an elegant combination of white and gold. Crafted of white eucalyptus-veneered MDF, th...
Category

H 14.57 in. W 47.25 in. D 47.25 in.
Platner Coffee Table, Glass Top & Rose Gold Base
By Knoll, Warren Platner
Located in East Greenville, PA
In 1966, the Platner Collection captured the “decorative, gentle, graceful” shapes that were beginning to infiltrate the modern vocabulary. The iconic coffee table, is created by wel...
Category

H 15.25 in. Dm 36 in.
Handmade Wrought Iron and Gold Gilt Coffee Table
Located in Los Angeles, CA
Stunning wrought iron coffee table with a gold gilt finish. The base has beautiful architectural lines, very well designed and executed. The base is topped with a 3/4 thick glass ...
Category

H 15.50 in. W 72 in. D 48 in.
Kintsugi Coffee Table
By Attivissimo
Located in Milan, IT
Named after the Japanese art of repairing broken pottery with precious metal to emphasize the imperfections, this superb coffee table will infuse elegance in a modern interior. Its s...
Category

H 19.69 in. W 35.44 in. D 35.44 in.
Linosa Coffee Table
By Antonio Ciulli e Figlio
Located in Milan, IT
This striking coffee table exudes Classic sophistication, thanks to its three sinuous and slender legs in bronze with a gold finish, each ending with an exquisite lion paw. The two l...
Category

H 27.56 in. Dm 25.99 in.
Mid-Century Modern Gold Faux Bamboo Coffee Table
Located in Hopewell, NJ
Sophisticated faux bamboo cocktail table in gold tone metal leaf over wood. The piece of glass is not attached and measures 1/4” thick with rounded and polished edges. Base of table ...
Category

H 16 in. W 51 in. D 23.5 in.
Flamingo Triangular Coffee Table with Gold Legs
By Gam Home,
Located in Milan, IT
Part of the Flamingo Collection, this side table of mid-century inspiration is extremely versatile, serving as an ideal complement to a living room as well as an original bedside tab...
Category

H 12.6 in. W 24.81 in. D 24.81 in.
Coffee Table with Black and Gold Marble
By Zanaboni
Located in Milan, IT
Meticulously designed by expert craftsmen, this table is characterized by balanced forms and prized materials. Fashioned of black and gold marble, the bold rectangular top is encased...
Category

H 18.51 in. W 59.06 in. D 31.5 in.
Marchesa Coffee Table
By Susan Hornbeak-Ortiz
Located in Laguna Niguel, CA
The Marchesa coffee table features a faceted hand-carved gold leaf and walnut design. Fully custom and made to order in California. As shown in gold leaf with walnut $15,890.00. Star...
Category

H 17 in. W 56 in. D 34 in.
Flamingo Square Coffee Table with Gold Legs
By Gam Home,
Located in Milan, IT
The solid yet light appearance of this coffee table results from a skillful combination of materials in a balanced silhouette that will suit elegantly any modern decor. Marked by a l...
Category

H 18.25 in. W 39 in. D 23 in.
23-Carat Rectangular Gold-Plated Coffee Table, 1960s
Located in Schagen, NL
This exclusive two-tiered table was designed with a gold-plated metal frame and wonderful mirrored borders in the glass. It remains in a good vintage condition with wear consistent w...
Category

Choose from an assortment of styles, material and more with respect to the gold coffee table you’re looking for at 1stDibs. Each gold coffee table for sale was constructed with extraordinary care, often using metal, bronze and glass. Find 606 options for an antique or vintage gold coffee table now, or shop our selection of 372 modern versions for a more contemporary example of this long-cherished piece. You’ve searched high and low for the perfect gold coffee table — we have versions that date back to the 18th Century alongside those produced as recently as the 21st Century are available. A gold coffee table made by Mid-Century Modern designers — as well as those associated with Modern — is very popular. Philip and Kelvin LaVerne, Draga & Aurel and Maison Jansen each produced at least one beautiful gold coffee table that is worth considering.

How Much is a Gold Coffee Table?