W 36 in. L 238 in.
North African Tribal Khozema Rug Modern Moroccan Design
By Berber Tribes of Morocco
Located in Lohr, Bavaria, DE
This tribal hand-knotted rug was made by a woman in the Moroccan Atlas Mountains. She upcyled textiles from skirts and wedding dresses. These are cut into small pieces and knotted in...
Category 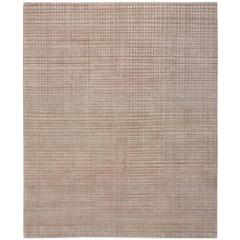 W 74 in. L 81 in.
Stunning Anthracite Grey Moroccan Berber Rug
Located in Milan, IT
A large Berber carpet from the Middle Atlas woven in the Beni Ouarain style, distinguished by a slate grey-black color for the background. Woven with the best quality wool available ...
Category

W 108 in. L 72 in.
Stunning Design Midcentury Modern Carpet Rug, Hand Knotted and with Great Colors
Located in Lisse, NL
Good size and wonderful condition rug. When it comes to decorating the floor of your home, we cannot think of a better way then with a good quality rug. This stylish and hand knotte...
Category

W 58 in. L 95 in.
Antique Heriz Rug
Located in Norwalk, CT
Measures: 9'.9 x 12'.2 The city of Heriz is situated in the northwest of Iran, not far from the greater city of Tabriz. In the city and its surroundings carpets are manufactured wit...
Category

W 117 in. L 146 in.
Indian Made Handmade Contemporary Solid Area Rug
Located in Norwalk, CT
Tone-on-tone stripes give the Solid collection depth and sophistication. These rugs introduce an unexpected but welcome jolt of color into an otherwise neutral space. Handcrafted by ...
Category

W 137 in. L 176 in.
Gorgeously Designed Square Sultanabad Rug
Located in Norwalk, CT
A hand-knotted Sultanabad rug with a floral design and border. Accents of blue, brown and beige throughout.
Category

W 34 in. L 51 in.
Antique Zeychour Caucasian Kuba Rug
Located in New York, NY
A late 19th century Caucasian Zeychour Kuba rug. A subtype of the Kuba rug, antique Seychour (also known as Seichur and Zeychour) rugs are made in the small town of Yukhari-Zeykhu...
Category

W 49.61 in. L 78.75 in.
Handmade Antique Indian Indo-Mahal Rug, 1930s
Located in Bordeaux, FR
Antique Indo-Mahal rug in original good condition. The design on this rug is Persian but it was made in India. The rug is very colorful: red, beige, green, pink, yellow, azure, sky b...
Category

W 122.05 in. L 162.21 in.
Handmade Vintage Nain Style Rug, 1970s, 1C687
Located in Bordeaux, FR
Handmade vintage Nain style rug in original good condition, it has some low pile. The rug is from the end of 20th century made in squarish shape. - Condition: Original good, some ...
Category

W 29.93 in. L 39.38 in.
Handmade Antique Kurdish Style Rug, 1880s, 1B413
Located in Bordeaux, FR
Antique Kurdish style rug in traditional design, olive green and yellow shades. The rug is from the end of 19th century, in good condition.
Category

W 41.74 in. L 65.75 in.
Handmade Antique Lilihan Style Rug, 1920s, 1B821
Located in Bordeaux, FR
Handmade antique Lilihan style small rug in original good condition. The rug is from the beginning of 20th century made in wool on cotton. - Condition: Original good, - circa 1...
Category

W 25.2 in. L 38.19 in.
Handmade Antique Lilihan Style Rug, 1920s, 1B814
Located in Bordeaux, FR
Handmade antique Lilihan style rug in red color. The rug is from the beginning of 20th century in original condition, the end are missing and it has some low pile. -Condition: ori...
Category

W 37.01 in. L 62.21 in.
Handmade Antique Khamseh Style Rug, 1840s, 1B663
Located in Bordeaux, FR
Antique handmade collectible Khamseh rug from the mid-18th century. It is in bright natural colors and in distressed condition. Condition: Original, distressed, circa 1840s, ...
Category

How Much are Hand Knotted Rugs?

Hand knotted rugs can differ in price owing to various characteristics — the average selling price at 1stDibs is $5,160, while the lowest priced sells for $50 and the highest can go for as much as $3,200,000.