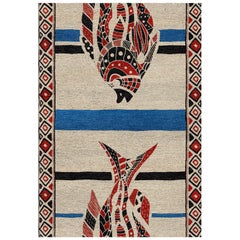 W 97 in. L 116 in.
Black and White Handmade Wool Rug from Inkblot Collection by Gordian
By Gordian Rugs
Located in New York, NY
Gordian’s Inkblots collection draws its influence from the famous Rorschach testing method which seeks to provide awareness and understanding of our identity and personal fulfilment....
Category

How Much is a Handmade Wool Rug?

Prices for a handmade wool rug can differ depending upon size, time period and other attributes — at 1stDibs, they begin at $140 and can go as high as $825,000, while the average can fetch as much as $4,439.