H 36.25 in. W 32.63 in. D 16.5 in.
Italian Baroque Walnut Commode
Located in Essex, MA
With a rectangular top over three drawers flanked by carved figures, raised on bracket feet.
Category

H 47.25 in. W 25.6 in. D 14.57 in.
Antique Marquetry Chest of Drawers Commode Dresser Made in Italy
Located in West Hartford, CT
Rare antique marquetry chest of drawers circa early 19th century. There are some losses as would be expected from a piece of this age. We have taken several photographs to show losse...
Category

Antique Marquetry Chest of Drawers Commode Dresser Made in Italy 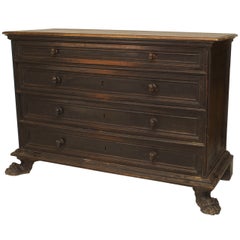 H 44 in. W 66.5 in. D 25 in.
Commode Cassetone Chest of Drawers Italian Brescia Lombardy Walnut Carved Front
Located in Eversholt, Bedfordshire
This rare cassettone oozes charm and character. The carved decoration is particular to Brescia in Lombardy and the knobs are a rare feature carved as flowerheads to the petals behind...
Category

H 36.62 in. W 55.12 in. D 21.66 in.
Bleached Italian Chest of Drawers
Located in Los Angeles, CA
An extraordinary Italian Baroque style Chest of Drawers made out of walnut wood with a new bleached wood finish that has been fully restored. This piece features a wooden top, three ...
Category

H 37.75 in. W 55.75 in. D 21.5 in.
1900s Venetian Baroque Commode Chest of Drawers in Burl Walnut with Ebonized Det
Located in Miami, FL
A elegant serpentine Venetian 1900s Baroque commode chest of drawers in ebonized hand carved walnut and walnut veneered, drawers and top with molded edges, raised on a plinth base re...
Category

H 44.25 in. W 62 in. D 24.63 in.
18th Century Ebonized Small Italian Baroque Commode
Located in Berlin, DE
This charming small 18th Century ebonized Baroque Commode was made in Italy around 1760. A very unique piece of furniture with a great Patina.
Category

H 34.4 in. W 51.2 in. D 20 in.
Italian Louis XV Style 1940s Chest of Drawers
Located in Isle Sur La Sorgue, Vaucluse
Gorgeous and decorative chest of drawers in the Baroque (decor) & Louis XV (shape) styles, painted with lovely motifs on the front and chinoiserie-inspired scenes on both sides. The ...
Category

H 43 in. W 60.25 in. D 25 in.
Barocchetto Chest of Drawers Marble, Italy, 20th Century
Located in Milano, IT
Chest of drawers in the style of Barocchetto, lacquered with chinoiserie ì, supported by four sabre-shaped legs, the lower band is shaped; there are two drawers on the front. Entirel...
Category

H 42.5 in. W 60 in. D 24 in.
Italian Baroque Walnut 3-Drawer Commode of Smaller Size, Late 17th Century
Located in Atlanta, GA
Having a rectangular top with molded edge above a conforming case with paneled sides and housing three paneled drawers, the drawers retaining antique pulls and escutcheons, raised on...
Category

H 40.56 in. W 42.13 in. D 23.63 in.
Chest of Drawers with Gold Leaf
By Bianchini & Capponi
Located in Milan, IT
A celebration of traditional craftsmanship and Baroque-inspired style, this chest of drawers is a precious object of functional decor that will enrich the look of a living room, entr...
Category

Chest of Drawers with Gold Leaf

H 37.8 in. W 53.55 in. D 24.02 in.
Italian Marquetry Commode or Secretaire
Located in Winter Park, FL
18th century Italian marquetry commode with three drawers and a top drawer that pulls out to reveal a desk. Exceptional craftsmanship for this Piedmont (Northern Italy) chest, made o...
Category

H 36 in. W 24.5 in. D 16.5 in.
Pair of Italian Vintage Painted Bombe Commodes
Located in Vancouver, British Columbia
Unusual to find in a pair- vintage painted bombe commodes from Italy. The painted finish is showing attractive age-related patina and fading and is accented with raised scrolled deta...
Category

H 32 in. W 40 in. D 18 in.
Italian, Emiliana, Baroque Period Paneled Walnut 3-Drawer Cassettone
Located in Atlanta, GA
The rectangular top with a molded edge above a conforming case housing three paneled drawers with original patinated brass pulls, the sides of the case with large raised panels, the ...
Category

H 35 in. W 56 in. D 18.75 in.
Italian Walnut Three-Drawer Chest
Located in San Francisco, CA
Walnut Renaissance three-drawer chest with raised panels on the drawer fronts and 17th century brass drawer pulls and escutheons. We believe this piece to be a modified prie dieu as ...
Category

H 31.5 in. W 45 in. D 29 in.
Pair of Small Italian Lacquered Commodes 19' century
Located in Rome, IT
A pair of small Italian pale green lacquered, parcel-gilt and pastiglia decorated commodes. Decorated reserves with flowers and birds, one with two drawers, the other with one door...
Category

H 29.93 in. W 24.02 in. D 14.97 in.
17th century Italian Baroque walnut Credenza or Desk
Located in Troy, NY
A rare, multi-functional piece, the doors opening to reveal a fitted interior with eight drawers and a small middle door, the slanted top with a fall front desk compartment. Beautifu...
Category

H 92.52 in. W 49.22 in. D 21.26 in.
Italian Baroque Walnut Cassone Inlaid with Engraved Fruitwood Marquetry, 17th C
Located in London, GB
A stunning, noble and important early piece - it's original provenance Palazzo Sacchetti, Rome. With a rectangular top above a roundel with a coat-of-arms flanked by grotesques and s...
Category

How Much are Italian Commode Chest Drawers Baroque?

The average selling price for a italian commode chest drawers baroque at 1stDibs is $7,250, while they’re typically $595 on the low end and $65,000 for the highest priced.