H 44 in. Dm 27 in.
Regency Style Bronze Chandelier
Located in Los Angeles, CA
This beautifully detailed gilt bronze chandelier from the 1900's has graceful lines and a light feeling allowing it to work in even a smaller room. It has six full-sized light socke...
Category 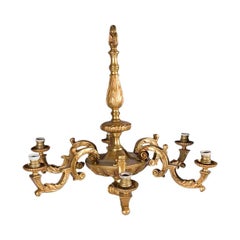 H 42 in. Dm 24 in.
Hollywood Regency Gilt Bronze and Crystal Chandelier
Located in Stamford, CT
A finely cast gilt bronze tiered chandelier having large and impressive crystals. This one of a kind lighting fixture is simply stunning and certain to spark up conversation. 25 ligh...
Category

H 34 in. Dm 24 in.
Wonderful French Neoclassical Bronze Crystal Regency Baltic Empire Chandelier
Located in Roslyn, NY
A wonderful French neoclassical bronze and crystal chandelier in the Regency, Baltic design. Each of the eight arms are draped with delicate crystals, and fished with an elegant cut ...
Category

H 15.75 in. Dm 27.56 in.
Large Striking Art Deco Style Glass Bronze & Brass Hollywood Regency Chandelier
Located in Lisse, NL
Stunning, Art Deco meets Hollywood Regency chandelier. If you are looking for a good size chandelier with a unique and great looking design then this midcentury era fixture could be...
Category

H 22.5 in. W 23 in. D 23 in.
Fine Regency Period Gilt-Bronze and Cut-Crystal Frame Chandelier, circa 1830
Located in London, GB
A fine Regency period gilt bronze and cut-crystal frame chandelier. English, circa 1830. This fine chandelier has a foliate corona hung with lancet-shaped drops above strings ...
Category

How Much is a Regency Bronze Chandelier?

The average selling price for a regency bronze chandelier at 1stDibs is $5,100, while they’re typically $550 on the low end and $80,884 for the highest priced.