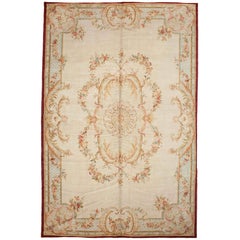 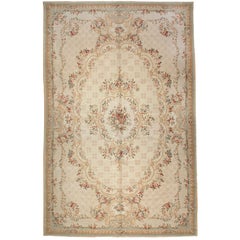 W 120 in. L 136 in.
Mehraban Vintage French Savonnerie Rug
Located in WEST HOLLYWOOD, CA
Savonnerie is one of the finest French vintage rugs in our collection. With its intricate details and well-coordinated color scheme of gold and green, it features grandiose diamond-s...
Category

W 142 in. L 198 in.
Antique Spanish Savonnerie Area Rug
Located in Chevy Chase, MD
The Savonnerie manufactory was the most prestigious European manufactory of knotted-pile carpets, enjoying its greatest period circa 1650–1685; the cachet of its name is casually app...
Category

W 59.06 in. L 149.61 in.
cc-tapis Traces De Savonnerie Rug
By cc-tapis
Located in Brooklyn, NY
Hand knotted in the cc-tapis atelier in Kathmandu, Nepal. The rug is made with cotton weave, Himalayan wool and silk pile, coming from the areas surrounding the atelier. 152.000 indi...
Category

W 90.56 in. L 118.12 in.
Savonnerie Style Wool Area Rug
Located in West Hollywood, CA
The Savonnerie rug style dates back to the French royal courts of the 17th century when domestic workshops were established to replace the importation of Oriental rugs. Ultimately a ...
Category

W 30.32 in. L 48.82 in.
Antique Pale Pink Austrian Savonnerie Rug
Located in Milan, IT
A rare and beautiful Savonnerie carpet woven in a Viennese workshop at around the turn of the century, delicately decorated by tone-on-tone pastel motifs in the romantic floral style...
Category

W 48.04 in. L 84.26 in.
Antique Rugs, French Savonnerie Carpet, Beige Floral Carpet Rug
Located in Hampshire, GB
During the early seventeenth century, a weaver named Pierre DuPont travelled to the Levant. Upon his return, he claimed to have discovered the technique of creating Turkish rugs. Ori...
Category

W 144.1 in. L 204.34 in.
Handmade Vintage French Savonnerie Rug, 1950s, 1P69
Located in Bordeaux, FR
Antique European Savonnerie rug from France. This rug has been made in the years 1950s, designed with an innovative technique for the time. The rug made in wool. -condition: origi...
Category

W 43.31 in. L 104.34 in.
Handmade Antique Spanish Savonnerie Rug, 1930s, 1P55
Located in Bordeaux, FR
Antique European Savonnerie rug from Spain. The rug is from the beginning of 20th century in original good condition. The rug made in wool. -Condition: Original good, -circa 19...
Category

W 70.87 in. L 101.19 in.
Savonnerie Rug Vintage Mid-century Light Salmon Color
Located in Ferrara, IT
This is a vintage European rug woven during the mid-20th century circa 1950 and measures 141 x 72CM in size. It has a highly classical European drawing with golden-colored curling le...
Category

W 28.35 in. L 55.52 in.
Handmade Antique French Savonnerie Rug, 1930s, 1P61
Located in Bordeaux, FR
Antique European Savonnerie rug from France. The rug is from the beginning of 20th century in original good condition. The rug made in wool. - Condition: Original good, - circa...
Category

Dm 90.56 in.
Get Updated with New Arrivals
Save "Savonnerie Hand Knotted Rug", and we’ll notify you when there are new listings in this category.

How Much is a Savonnerie Hand Knotted Rug?

A savonnerie hand knotted rug can differ in price owing to various characteristics — the average selling price 1stDibs is $8,999, while the lowest priced sells for $425 and the highest can go for as much as $300,000.