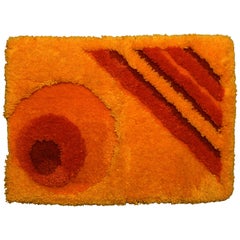 W 90 in. L 123 in.
Vintage Scandinavian Rya Rug, circa Mid-20th Century
Located in Los Angeles, CA
This is a Scandinavian Rya rug crafted in the mid-20th century. It features a grand diamond design repeating outward and surrounded by smaller diamonds then bordered by an abstract p...
Category

W 55 in. L 78 in.
Scandinavian Fire Pattern Shag Rug by Ege Rya, circa 1970
By Ege Rya
Located in Van Nuys, CA
A great abstract design in various shades of red and orange. Nice smaller size for accenting a part of a room. By Ege Rya in Sweden, original tag has been removed.
Category

W 98 in. L 134 in.
Rya Rug Scandinavian Design Nordic Knots Rug
Located in Ferrara, IT
This rug is a work of art that will brighten up any room. The bold, abstract design is eye-catching and unique, and the colors are cheerful and vibrant. The rug is made of high-quali...
Category

W 55 in. L 76 in.
Vintage Scandinavian Abstract Rya Rug
Located in Chicago, IL
Nice vintage abstract attributed to a maker in Scandinavia. Remains of a red label on back.
Category

W 48 in. L 71 in.
Large 1960's Scandinavian Handmade Wool Rya Rug
Located in Shepperton, Surrey
A large and outstanding handmade wool Rya rug from the 60’s with a very pleasing patern and colour pallete of forrest greens and aqua blues. Very unusual to find such a fine quality ...
Category

W 77.17 in. L 117.72 in.
Scandinavian Abstract Shag Rug, circa 1970
By Ege Rya
Located in Van Nuys, CA
Great Scandinavian abstract rug with a geometric stepped pattern in various shades of brown, yellow and grey. Nice smaller size for accenting a part of a room.
Category

W 129.93 in. L 98.43 in.
Rya Scandinavian Abstract Geometric Shag Rug, circa 1970
Located in Van Nuys, CA
This is a great Scandinavian Rya abstract rug with geometric block patterns in various shades of blue, green, and tan. It is a smaller-sized rug, recommended for accenting a room.
Category

W 74 in. L 105 in.
Vintage Scandinavian Rya Painterly Abstract Wool Rug, circa 1950
Located in Milan, IT
An unusual Finnish Rya, distinguished by the fact that it is knotted by hand instead of being machine made. The weaver employed all her skills in mixing different shades of colored w...
Category

W 46.07 in. L 68.12 in.
Vintage Scandinavian Mid-Century Modern Rya Rug With Geometric Design
Located in Milan, IT
Machine woven Rya carpets were very popular in Europe in the mid-20th century, as they provided an affordable alternative to hand-knotted carpets and were often decorated, like in th...
Category

W 50 in. L 72 in.
Scandinavian Modern Rya Pile Rug by Barbro Nilsson, Märta Måås-Fjetterström AB
By Barbro Lundberg-Nilsson, Märta Måås-Fjetterström AB 1
Located in Stockholm, SE
Scandinavian Modern "Tigerfällen" rug by artist Barbro Nilsson was designed 1943 for MMF atelier in Båstad. In the supreme court of Stockholm there is a copy of the same rug. This pa...
Category

W 55 in. L 58 in.
Get Updated with New Arrivals
Follow "Scandinavian Rya Rugs", and we’ll notify you when there are new listings in this category.

How Much are Scandinavian Rya Rugs?

Scandinavian rya rugs can differ in price owing to various characteristics — the average selling price at 1stDibs is $2,199, while the lowest priced sells for $244 and the highest can go for as much as $85,000.