H 35 in. Dm 15.5 in.
Uno Semi-Flush Mount by form A
By form A, Gaspare & Vittorio Asaro
Located in New York, NY
The Uno ceiling light by form A exemplifies simple elegance via its clean profile designed around a single Murano glass shade. Shown in polished brass with our signature Murano bubbl...
Category

Uno Semi-Flush Mount by form A

H 21.6 in. Dm 13.8 in.
Large Three Glass Panel Pendant Light by Mazzega
By Mazzega
Located in New York, NY
Large midcentury Murano glass pendant light by Mazzega. The three clear and smoky glass elements come together to form a bowl shape. This is suspended by a brass rod and canopy whic...
Category 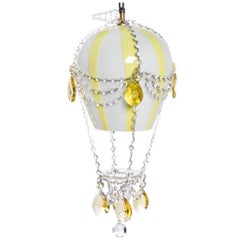 H 18 in. W 25 in. D 25 in.
Neoclassical Alabaster Light Fixture
Located in New York, NY
Carved from a single piece of pale pink alabaster with some charcoal mineral veining, the light features a wreath of laurel leaves crowning the upper rim, curved and carved banding a...
Category

H 34 in. Dm 21 in.
Art Glass Light Fixture
Located in New York, NY
A peach-toned fan shaped shell, suspended from a single nickel plated rod and canopy. The assembly is decorated with olives and branches.
Category

H 34.75 in. Dm 18 in.
1 of the 6-Light Fixtures by Helena Tynell, 1970s
By Helena Tynell, Glashütte Limburg
Located in Rijssen, NL
A absolutely amazing set of pendant lights fixture with five pedant lights from the designer Helena Tynell. Manufactured in circa 1970 (late 1960s and early 1970s), Germany. A design...
Category

H 21 in. Dm 18.5 in.
Ceiling Light Fixture, Signed Reggiani, Made in Italy, circa 1970
By Reggiani
Located in Jersey City, NJ
Ceiling fixture in interlacing, white rubber coated metal with a black rubber border. The corners are rounded and the center is dome-shaped with a single socket. A cylindrical, chrom...
Category

Ceiling Light Fixture, Signed Reggiani, Made in Italy, circa 1970

H 31 in. W 14 in. D 14 in.
Beautiful Looking Classical Style Brass and Alabaster Chandelier / Light Fixture
Located in Lisse, NL
Small size and great looking brass and alabaster chandelier. This here small size chandelier is another one of our recent great finds. If you are looking for a modest size alabaster...
Category

H 24.8 in. Dm 22 in.
Fitzroy Hanging Light Fixture in Dark Bronze with Cream Shade
Located in New York, NY
"Fitzroy" hanging light fixture made of dark bronze with off- white parchment shade. Multiple quantities available. Made by Phillips and Wood. England, circa 2000. Indoor use only...
Category

H 6.7 in. Dm 22.25 in.
1 of the 3 Cascade Light Fixtures in the Style of Emil Stejnar
By Emil Stejnar
Located in Rijssen, NL
One of the three absolutely amazing huge ceiling mount Sputniks in the style of Emil Stejnar. The cut-glass gives a stunning diffuse light effect and a nice pattern on ceiling, walls...
Category

H 47.5 in. Dm 2.5 in.
Antique Cast Bronze Outdoor Pendant Light Fixture with Stained Glass Panels
Located in Hamilton, Ontario
This substantial antique six-sided outdoor pendant light was made between 1900 and 1910, most likely in the United States. The heavy and very ornate frame and mount are cast bronze w...
Category

H 35.44 in. Dm 13 in.
Pair of French 1920s Crystal Light Fixtures with Campanula, Ribbon and Rosettes
Located in Atlanta, GA
A pair of French crystal light fixtures from the early 20th century, with campanula, ribbon and rosette motifs. Born in France during the Années Folles (Roaring Twenties), each of th...
Category

H 24 in. Dm 33 in.
One of Five RAAK Style Vintage Midcentury Brass Pendant Light Lamp Fixtures
By Maison Charles, RAAK
Located in Landau an der Isar, Bayern
One of a set of five rare and unusual futuristic polished brass European pendant light fixtures in a similar style to the 'Fuga' wall lights by Dutch firm RAAK of Amsterdam and the '...
Category

H 12.6 in. Dm 5.91 in.
Pair of Large Cascade Light Fixtures in the Style of Emil Stejnar
By Emil Stejnar
Located in Rijssen, NL
A pair of absolutely amazing huge ceiling mount pendant light fixtures with three sputniks in the style of Emil Stejnar. Complete with a special new custom made matching brass ceilin...
Category

How Much are Single Light Fixtures?

Questions About Single Light Fixtures
Prices for most single light fixtures on 1stdibs are negotiable. You’ll see a "Make an Offer" button on the item details page, indicating that the seller is willing to consider a lower price. It’s not uncommon for customers to get 15–25% off the list price after negotiating. See our tips for negotiating like a pro.
Only experienced, professional sellers who have applied and been thoroughly vetted by our team of experts can sell single light fixtures and other quality items on our site. Learn more about becoming a 1stdibs seller.
The 1stdibs Buyer Protection Guarantee provides coverage for qualified purchases in the unlikely event that the item arrives not as described or is damaged. We’ll work with you and the seller to find a resolution, ensuring your satisfaction. View details
We have partnerships with the world's best shipping providers to facilitate seamless and fully-insured delivery from the seller's location directly to you, wherever you are in the world. Our logistics team is comprised of dedicated members who arrange all the details with our partners, servicing and supporting all shipments. Learn more about shipping on 1stdibs.
For your convenience, we offer multiple payment methods, including all major credit cards and PayPal. For many purchases we also offer financing options or wire transfer. Learn more about payment options on 1stdibs.