Free Shipping
TIFFANY & CO. Cufflinks with Sapphires
By Tiffany & Co.
Located in New York, NY
Art Deco double-sided cufflinks made by Tiffany & Co. Set in 14K yellow gold. Made circa 1930. Large size rectangles with engine- turned stripes; each side is set with a sugar loaf ...
Category 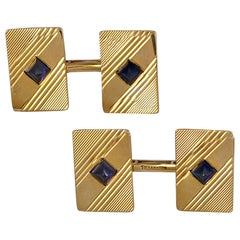 Free Shipping
Get Updated with New Arrivals
Save "Tiffany Sapphire", and we’ll notify you when there are new listings in this category.

Tiffany Sapphire For Sale on 1stDibs

Surely you’ll find the exact tiffany sapphire you’re seeking on 1stDibs — we’ve got a vast assortment for sale. Each design created in this style — which was crafted with great care and often made from Gold, 18k Gold and Platinum — can elevate any look. Find an antique version now, or shop for 929 vintage or 234 modern creation for a more contemporary example of these cherished accessories. If you’re looking for a tiffany sapphire from a specific time period, our collection is diverse and broad-ranging, and you’ll find at least one that dates back to the 18th Century while another version may have been produced as recently as the 21st Century. For this particular piece, .5 Carat and 1 Carat are consistently popular carat weights. Today, if you’re looking for a round cut version of this piece and are unable to find the perfect match, our selection also includes brilliant cut and cabochon alternatives. When shopping for a tiffany sapphire, you’ll find that there are less available pieces for unisex or men today than there are for women.

How Much is a Tiffany Sapphire?