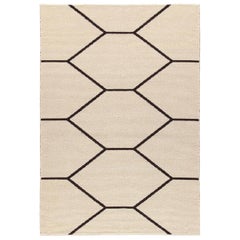 W 78.75 in. L 108.27 in.
Rug 1 Piece of Gold - Handknotted Carpet Geometric Black White Green Wool Silk
By Carpets CC
Located in Dubai, Dubai
Design Title: "I looked everywhere and found 1 piece of gold" This rug tells you a story of finding a treasure, its found as one piece of golden silk. It is hand knotted in finest N...
Category

W 78.75 in. L 118.12 in.
Rug 31st October Wool Black Modern Geometric Off-White Black Dhurrie Carpet
By Carpets CC
Located in Dubai, Dubai
Design Title: "31st October Black" "31st October" was made on ALL Saint's Day from a Halloween inspiration. The carpet is made on a table hand-loom. This is an 'everyday carpet' ...
Category

W 66.93 in. L 94.49 in.
Cream Wool Rug Lines & Green Circle in Silk by Cecilia Setterdahl for Carpets CC
By Carpets CC
Located in Dubai, Dubai
Design Title: "Escape" from Freedom Collection This is the third hand-knotted carpet out of four in the "Freedom Collection " that takes inspiration from Yeonmi Park's novel about h...
Category

W 32.29 in. L 118.12 in.
Murano Swirl Round White Rug
By Carpet Edition
Located in Milan, IT
The invisible ridges traced by whirlwinds are actualized in this stunning round rug, a one-off piece deftly tufted by hand combining wool and cotton. Its characteristic raised textur...
Category

W 78.75 in. L 78.75 in.
Murano Swirl Rectangular White Rug
By Carpet Edition
Located in Milan, IT
Hypnotizing in its concentric, raised design inspired by the invisible lines traced by whirlwinds, this rug is a precious piece carefully hand-tufted by coupling wool and cotton yarn...
Category

W 78.75 in. L 118.12 in.
Dark Gray and White Rug
By DSV Carpets
Located in Milan, IT
This stunning rug is handwoven in India using the finest New Zealand wool and bamboo silk, the white motifs emerging from the dark grey background bringing balance to any space. The ...
Category

W 66.93 in. L 94.49 in.
The Floor Is Lava - Eolian Blue & White Shaped Rug by PLACéE
By Carpet Edition
Located in Milan, IT
Stimulating in its asymmetrical design of blue and white stripes, this hand-tufted rug combining New Zealand wool and Tencel lyocell belongs to "The Floor Is Lava" Collection. The st...
Category

W 66.93 in. L 94.49 in.
The Floor Is Lava - Fire Line Angled Red & White Rug by PLACéE
By Carpet Edition
Located in Milan, IT
This intriguing rug from "The Floor Is Lava" Collection showcases warped lines melting like lava flows. Its eye-catching, angled white silhouette and red lines are obtained by hand-t...
Category

W 66.93 in. L 94.49 in.
The Floor Is Lava - Lava Line Black-and-White Rug by PLACéE
By Carpet Edition
Located in Milan, IT
Part of "The Floor Is Lava" Collection, this water-resistant rug boasts an impactful asymmetrical design where the black lines warp as seemingly melted by some source of heat. It is ...
Category

W 63 in. L 110.24 in.
Vintage Rya Handmade Carpet, Multicolor Wool Carpet-Colorful, Vibrant, White
Located in New York, NY
Rya rugs are the traditional Scandinavian rugs made in Sweden and Finland, and word “Rya” actually means Rug. The vintage Scandinavian Rya rugs that were made in Sweden have extremel...
Category

W 150 in. L 214 in.
Rug Tribal Pink - Unique Modern Cream Geometric Wool w/ Pink Tribal Face Rustic
By Carpets CC
Located in Dubai, Dubai
Design Title: "Tribal Pink" from Tribal Collection This is from the " Tribal Collection" made in hand spun and naturally dyed Afghan wool with an abrashed look. It is a unique piece...
Category

W 66.93 in. L 94.49 in.
Black and White Tibetan Wool and Silk Area Rug By CARINI 8x10
By Joseph Carini Carpets
Located in New York, NY
This carpet is a stunning way to jazz up a room. It is the first variation of our Coco Drum series, this design is woven in high quality wool and silk. The charcoal and creamy white ...
Category

W 162 in. L 195 in.
Rug Tribal Blue - Modern Geometric Wool Beige Cream with Graphic Face Rustic
By Carpets CC
Located in Dubai, Dubai
Design Title: "Tribal Blue" from Tribal Collection This is from the " Tribal Collection" made in hand spun and naturally dyed Afghan wool with an abrashed look. It is a unique piece...
Category

W 66.93 in. L 94.49 in.
Rug Mohawk - Modern Handknotted Cream Beige Afghan Wool w/ Purple Violet Rustic
By Carpets CC
Located in Dubai, Dubai
Design Title: "Mohawk" Mohawk is made from hand spun and natural dyed Afghan wool that gives a rustic look and soft feeling. The carpet is made with a pile height of 6 cm on the col...
Category

W 143 in. L 180 in.
21st Century Carpet Rug Frantik in Himalayan Wool and Silk, Black, White
By Illulian
Located in Milan, IT
The black silk of the decoration creates a stunning pattern of diamonds divided into off-placed strips. This rug is hand knotted in Nepal by our artisans by using 50% silk and 50% f...
Category

W 42 in. L 70 in.
Handwoven Oriental Vintage Turkish Carpets; Hand Painted Red and White
Located in Hampshire, GB
This handwoven vintage Turkish carpet features a hand painted floral red pattern on a white background on this Oriental rug. These floral patterned rugs can be used as the centre of ...
Category

W 96.07 in. L 64.57 in.
21st Century Carpet Rug Romance in Himalayan Wool and Silk Beige, White
By Illulian
Located in Milan, IT
Romance is a characteristic poem of the Spanish literary tradition that became popular in the 15th century at the time of the last reign of the Moors in Spain. From here Illulian tak...
Category

W 142 in. L 204 in.
Antique Handsome Serapi Carpet, Handmade Wool Carpet Red Navy, Light Blue, Ivory
Located in New York, NY
Heriz carpets are the staple of the furnishing market and remain the most popular of all NW Persian carpets. They were produced for the rapidly growing US market in the late 19th-ear...
Category

W 116 in. L 128 in.
21st Century Carpet Rug Marrakesh in Himalayan Wool and Silk White, Ivory
By Illulian
Located in Milan, IT
A drawing based on oriental decorative art. In an atmosphere taken from one thousands and one nights this design inspired by a chiseled door perfectly enhances the energy of the colo...
Category

W 94.49 in. L 118.12 in.
Samit Borgosesia Midcentury Blue and White Virgin Wool Italian Carpet, 1970s
Located in Roma, IT
Amazing midcentury blue and white pure virgin wool carpet. This wonderful rug was produced by Samit Borgosesia in Italy during the 1970s. This item is entirely made of the purest ...
Category

W 63 in. L 35.44 in.
21st Century Carpet Rug Stella in Himalayan Wool Black, White
By Illulian
Located in Milan, IT
This rug is hand knotted in Nepal by our artisans by using 50% silk and 50% fine Himalayan wool dyed using vegetable and mineral pigments. The pile is 7 mm high with 152,000 knot/sqm...
Category

W 94.49 in. L 118.12 in.
21st Century Carpet Rug Edge in Himalayan Wool and Silk Goldish, Beige, White
By Illulian
Located in Milan, IT
Edge design is based on the concept of limit and its overcoming. A sequence of lines, sometimes thin while other times thicker, represent the challenges posed by these limits. It mig...
Category

W 94.49 in. L 118.12 in.
Get Updated with New Arrivals
Follow "White Carpet", and we’ll notify you when there are new listings in this category.

White Carpet For Sale on 1stDibs

With a vast inventory of beautiful furniture at 1stDibs, we’ve got just the white carpet you’re looking for. Each white carpet for sale was constructed with extraordinary care, often using fabric, wool and cotton. If you’re shopping for a white carpet, we have 1011 options in-stock, while there are 1294 modern editions to choose from as well. Your living room may not be complete without a white carpet — find older editions for sale from the 18th Century and newer versions made as recently as the 21st Century. Each white carpet bearing Modern, Mid-Century Modern or Art Deco hallmarks is very popular. Rug & Kilim, Art Hide and Ben Soleimani each produced at least one beautiful white carpet that is worth considering.

How Much is a White Carpet?

A white carpet can differ in price owing to various characteristics — the average selling price 1stDibs is $4,030, while the lowest priced sells for $50 and the highest can go for as much as $150,000.