Audley Dean Nicols is an El Paso artist and a painter of desert and cowboy landscapes, in an area from El Paso, Texas to Tucson, Arizona. He earned national recognition from these views of cowboys and cattle and the landscape in which they lived. Nicols was a member of the National Academy of Design and also did portraits, illustrations, murals and miniatures. Born in Pittsburgh, Pennsylvania, Audley Dean Nicols was part of an artistic family, with a mother, who was an art instructor and an aunt, Maria Nicols, who created Rockwood pottery. Nicols first studied art with his mother and then attended the Art Students League and the Metropolitan School of Fine Arts, in New York City. Nicols went to Europe for further study and then became an illustrator for Harper's, Scribners and Colliers. In the late 1920s or early 1930s, suffering from a tubercular hip, he settled in El Paso, Texas, a place he had seen on earlier tours of the United States and first visited in 1919. From there, Nicols began to paint western scenes in Texas, New Mexico, Arizona and California. Nicols worked in Tucson and his painting, In the Western Desert, was installed at the Gadsten Hotel, in Douglas, Arizona. 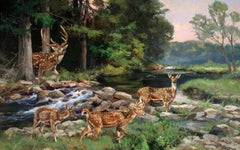 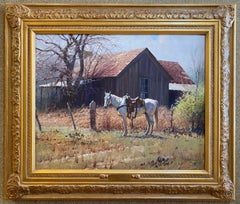 j-w-thrasher
"The Gathering Spot" Covey of Quail, Circa 1980