Augustus Vincent Tack, a painter of portraits, murals and abstractions, was born in Pittsburgh, Pennsylvania in 1870. From 1923 until he died in 1949, Tack produced approximately 78 abstract paintings. Tack has been described as "a Symbolist artist who entertained Romantic concepts about the relationship of man, God and nature." Tack’s family was Roman Catholic and he attended the Jesuit School St. Francis Xavier in New York City, graduating with an A.B. degree in 1890. Tack then began to study art in New York under H. Siddons Mowbray, John Twachtman and John La Farge. This program of working with individual artists whose work Tack admired, developed his talent so quickly that a painting he, age 19, sent to the Society of American Artists in 1889 received the highest rating and a place of honor. In the early 1890s, Tack made a trip to Europe to tour and to study in Paris under Luc-Olivier Merson at the Ecole des Beaux-Arts. Tack also visited Claude Monet's studio at Giverny. Exploring much diversity of subjects and styles, Tack did wide-ranging painting that from Realism to complete Abstraction. Beginning in the 1920s, he painted murals for various Catholic churches and government buildings, including the New Parliament Building, Winnipeg, Canada (1920) and the Nebraska State Capitol at Lincoln, Nebraska (1928). During this time Tack was much sought after by religious and civic institutions for mural commissions. Tack also became respected for his skills in portraiture. After World War II, Tack painted many of the significant military figures including General George C. Marshall. This portrait, circa 1949, is in the Phillips Collection in Washington, D.C. Tack's portraits and murals were traditional in style, but during the inter-war years, he also painted several mystical landscapes and abstract works on the themes of religion and creation. They evoke, through faceted slabs of color, suggestions of timelessness and spirituality in the tradition of Albert Pinkham Ryder, Georgia O'Keeffe and Clyfford Still. Inspired by what Tack saw on his many trips to the Western United States, he also based his compositions on photographs of the Western terrain, blowing them up to 10-15 times their original size and tracing from them, applying the image to the canvas through the traditional mural technique of pouncing. As a Symbolist artist, he was inspired by Christian theology and mysticism, Oriental art and philosophy and other influences including Medieval stained glass and paintings by James Whistler. According to Duncan Phillips, critic and patron of the arts, the artist had two sources for his ideas: God and the Eastern ideas of serenity and storm-opposing elements that transcend time and place in eternal balance. Tack developed a friendship with Duncan Phillips, most likely when Phillips came to New York in 1914. By 1920, Tack was on the board of the newly incorporated Phillips Memorial Art Gallery, and in 1921 he was Vice-President. Phillips, who collected many paintings by Tack, was the major critical and financial supporter of the artist, especially during his years of abstract painting. Many of these works are housed in the Phillips Collection in Washington DC. At the time of his death in 1949, the Phillips Memorial Gallery owned 35 paintings by the artist, 22 of which were fully abstract works.

(Biography provided by Arthur T. Kalaher Fine Art)
Applied Filters2 results
Artist:Augustus Vincent Tack
to
Item Location
2
2
Height
to
Width
to
2
2
2
10,803
2,536
2,470
1,908
2
2
2
2
The Call Home
By Augustus Vincent Tack
Located in Lawrence, NY
An example of American Impressioinism at its best, exhibited at the Pennsylvania Academy of Fine Arts in 1898. The straw hat the boy is wearing ties the painting to Thomas Sully's 1...
Category 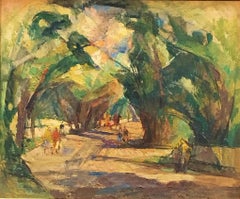 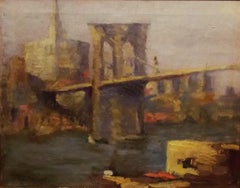