Basilios Poulos — Professor Emeritus of Painting and Drawing at Rice University in Houston, Texas — has directed and taught the Rice Studio Art in Greece program for nine summers and has been an artist-in-residence at the École des Beaux-Arts in Paris and at the University of Georgia in Cortona, Italy.

Poulos is a Greek-American artist who came to Rice University in 1975. He has had more than 35 one-person exhibitions in the United States and Europe, and his paintings are featured in notable public, private, and corporate collections, such as the Columbia Museum of Art (Columbia, South Carolina); the Mint Museum (Charlotte, North Carolina); the Museum of Fine Arts, Houston; the New Orleans Museum of Art; the Vorres Museum (Athens, Greece); and the Chase Manhattan Bank (New York and Athens, Greece). Professor Poulos has lectured throughout the United States, Greece and Italy, and is working on developing one-person exhibitions in both Houston and Athens, Greece. Professor Poulos lives in Houston and maintains a studio in Karies, Greece. His awards and grants include: The Guggenheim Fellowship, French Government Grant (for eight months in Paris), Mellon Enhancement Grant, the Fine Arts Foundation of Atlanta Grant and the Phi Beta Kappa Award for Excellence in Teaching.

(Biography provided by Reeves Antiques)
Applied Filters2 results
Creator:Basilios Poulos
to
Item Ships From
2
Height
to
Width
to
1
2
2
2
9,930
2,534
1,968
1,597
2
2
2
"Arna" Large Modern Gestural Abstract Expressionist Painting
By Basilios Poulos
Located in Houston, TX
Large minimal abstract painting with mainly pink tones with hits of blues orange and green. The painting is signed, titled and dated by the artist. It is framed in a wooden frame. At...
Category 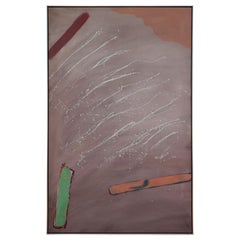 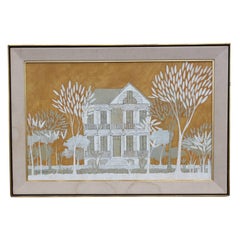