Bill Bomar was born in Fort Worth, Texas, where he started painting at the age of seven and painted only in oils until age 16. Born to a well-respected family (Bill Bomar's father, William P. Bomar, was the founding chairman of W.I. Cook Memorial Hospital), Bill Bomar was given many opportunities to learn from great men. From birth, he was afflicted with cerebral palsy, a condition which affected his walk, speech and coordination but before the age of 10 he demonstrated a gifted ability to draw with his left hand. In 1940 and 1941, he attended the Cranbrook  Academy of Art, and in 1942 he began studying with John Sloan in New York, with whom he continued to work later in Santa Fe, New Mexico. After working from the human figure with Sloan, he was instructed by Amédée Ozenfant for one year. Bomar then studied with Hans Hoffmann, who provided balance to the strict academicism of Ozenfant. In the late 1940s, Bomar studied watercolor technique with Josef Bakos in Santa Fe. Between his studies, Bomar would occasionally take a year off to work on his own. From childhood, most summers were spent working in New Mexico, where he bought a home in 1968. For several summers in the 1950s, while he was living in New York, he traveled with fellow artists and friends, including cousin Reilly Nail, Jules Kirschenbaum, and Cornelis Ruhtenberg, to study in Wellfleet and Cape Cod, Massachusetts. In 1970, he gave up his Chelsea Hotel studio, which he acquired 30 years earlier, thanks to mentor John Sloan, and began living in Ranchos de Taos, New Mexico Bomar first exhibited in a group show, Six Texas Painters, at the Weyhe Gallery in New York in 1944. This show was followed by numerous one-man and group exhibitions.

After his move to Taos, Bomar exhibited widely in New Mexico and Texas while continuing to show in New York. Despite his residency in New York and Taos, Bomar always remained connected to Fort Worth, taking frequent trips to interact with artist friends, such as Marjorie Johnson-Lee, Cynthia Brants and Kelly Fearing. This allowed him to play a key role in the Fort Worth Circle, even though he lived primarily outside of Fort Worth. The Fort Worth Circle of artists, active primarily between 1945–55, are united by their support of one another and their development of Fort Worth as an art community. The group emerged following World War II, when the industry and cultural sectors began to grow. The Fort Worth Art Association's Local Artists Show became an important venue for local artists to exhibit and gain recognition. Although the styles of these artists were quite distinct from one another, common influences shaped the work of many in the group. Cubism, with flattened, shifting planes, structural grid and roots in primitive art, colored the works of Dickson Reeder, George Grammer, Bill Bomar, Cynthia Brants, Bror Alexander Utter, and David Brownlow, among others. Surrealist interest in fantastic and dreamlike imagery influenced the work of Veronica Helfensteller, Kelly Fearing, and Flora Blanc Reeder, as well as that of Dickson Reeder, Bill Bomar, and Bror Alexander Utter. Although some of the Fort Worth artists worked in a number of modes the group as a whole moved beyond the earthy subject matter of Regionalism, which had dominated Texas art since the early 1930s.

In 1980, Bomar, with cousin Reilly Nail co-founded the Old Jail Art Center to which Bomar remained committed until his death in 1991. Bomar is represented in many private and public collections including the Old Jail Art Center, Albany, Texas, Amon Carter Museum of American Art, Fort Worth,Texas, the Museum of Fine Arts, Houston, Texas, and Modern Art Museum of Fort Worth, Texas. In 2008, Amon Carter Museum of American Art, Fort Worth with Scott Barker and Jane Myers produced a major exhibition of a corresponding book entitled Intimate Modernism: Fort Worth Circle Artists in the 1940s which details Bomar and the other members of the movement. 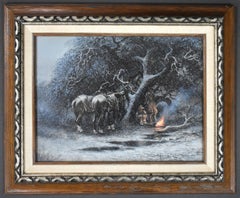 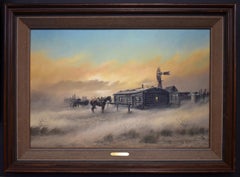