Bill Zaner was born on February 13, 1930. He passed away on November 22, 2015. Zaner was a Texas landscape master. The landscapes of Texas - mountains, deserts, high plains and rolling meadows fill each day's work for \Zaner. The artist discovered his subject more than four decades ago after he first moved to Texas. "I never had to go anywhere else to find such a wealth of beauty to paint," he says referring to Texas. Zaner has a lifetime of work to prove it, too. Reflecting on his career at age eighty-one, Zaner said he never wanted to do anything else with his life but paint. His work is a valued addition to many public and private collections, including the Texas Artists Collection of Texas A&M University, where he was honored with a one-man exhibit in 1989, the Frost Bank Collection in San Antonio, and many boardrooms and public display areas of such corporate collections as Dow Chemical USA, Entex, Internorth, Home Petroleum, Reading and Bates Company, Wanda Petroleum, Amoco, Paragon Group, R.M. Mayfield Construction Company and the law firm Fulbright and Jaworski. Not only is his studio brimming with sketchbooks and watercolor drafts, but on his easel, walls and floors stand the evidence of his personal admiration for the Lone Star State. No two are alike. A sea of bluebonnets surrounds a gnarled live oak beneath a bright spring sky in the Hill Country. Jagged red mountains reach into the heavens at sunset in Big Bend. Cranes dip to cresting waves on the beaches of the Gulf of Mexico. Water swirls around the ancient roots of cypress along the Guadalupe River. ” After leaving the Army in the early 1950s and moving to Texas, he lived in Houston where he began his artistic career painting portraits. Zaner continued to do that as he transitioned into painting the landscapes that he has rendered ever since. His work has also been represented in most major juried and invitational exhibits throughout the West Texas Fine Arts Association (TFAA), the Texas Watercolor Society, Dimension Houston, and the San Antonio Art League are but a few. 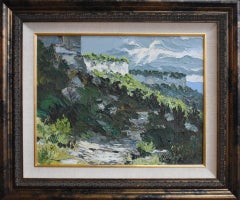 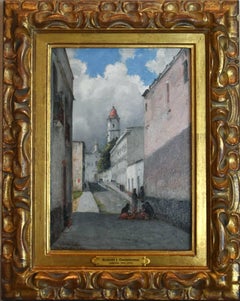 "Our Real Work Is In The Valley" West Texas Cowboy scene
By Randall Friemel
Located in San Antonio, TX
Category

Randall Friemel
"Our Real Work Is In The Valley" West Texas Cowboy scene, 2012