Claude Lefèbvre was born on September 12, 1632, in Fontainebleau. He was the son of the painter Jean Lefèbvre. The young Claude was the first pupil of Claude de Hoy in his hometown of Fontainebleau, then Eustache Le Sueur and finally, Charles Le Brun. Under the influence of his teacher Charles Le Brun, Lefèbvre specialized and excelled in the art of portraiture thanks to a technique perfected and recognized by his contemporaries. In 1663, at the age of 30, he became a member of the Académie Royale de Peinture et de Sculpture. The work that consecrated him among the great portraits of his time was the portrait of the French minister Jean-Baptiste Colbert of 1666, exhibited at the Palace of Versailles, in the Louis XIV room. In the following years, he moved to London, where he was very popular at the court of Charles II. Some of his paintings can be admired at the Palace of Versailles, the National Gallery of London, the Louvre and other museums including France. Lefebvre died in Paris in 1675. 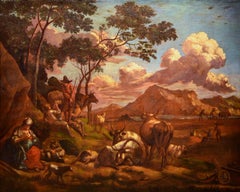 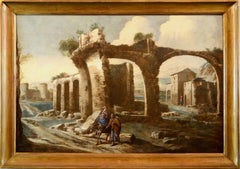 Adoration Of The Shepherds Painting Oil on canvas Italy 18th Century
By (After) Sebastiano Conca
Located in Riva del Garda, IT
Category