Growing up in California, Jack Baker received his bachelor of arts degree from Pomona College and his master of fine arts degree from Scripps College in Claremont. He also attended the University of Southern California, the Académie Julian in Paris and the University of Mexico. He painted with Milford Zornes and Millard Sheets. In 1955, Baker went to Addis Ababa, Ethiopia, to teach at the Government Technical School and was soon named the director of Emperor Haile Selassie's Academy of Art. Here, he began painting the indigenous flora and fauna, and the fascination with the exotic brought him to other African countries, among them Zanzibar and Kenya. Further travels included India, Russia, Malta and England, where he was equally attracted by the hedgerows and pastures of the English countryside. His work has been exhibited around the globe, from Bombay to London and California. 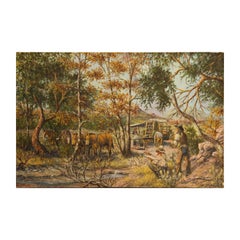 "The Water Carrier" Realist Portrait of a Woman with Water in the Desert
Located in Houston, TX
Category 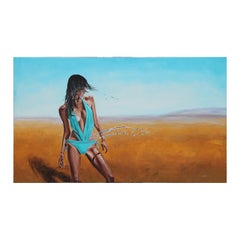 Painting Study of "The Angelus"
Located in Houston, TX
Category

after-jean-francois-millet-1
Painting Study of "The Angelus"