Pascal Ambrogiani was born in Marseille, France to Corsican parents and is the brother of another well-known expressionist painter, Pierre Ambrogiani. Like his brother, Ambrogiani left an impressive body of work of dazzling color. He was considered a virtuoso of gouache, a technique he mastered in the same way he did with oils, landscapes, maritime scenes, bouquets, fishes and a variety of other still lives. In the 1980s, he moved to the Parisian right bank and the Galerie Drouant, steps from the Élysée Palace, who became his agent of record. Ambrogiani’s works have been exhibited worldwide including New York, LA, Chicago, Tokyo, London and throughout Europe and his works are sold at auction extensively. 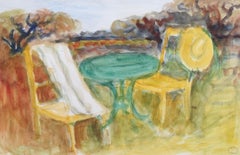 Maurice Savin
The Terrace, circa 1950s 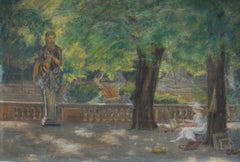 Pierre Ambrogiani
Still Life with Vessels and Violin, circa 1950s

Jacques Petit
Still Life with Flowers and Fruit, Circa 1970s

'Still Life with Guitar, Carafe and Sheet Music' by Laval, circa 1960s