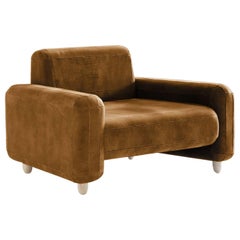 H 27.17 in. W 25.2 in. D 25.2 in.
Cognac Leather Tripolina Armchair
By Dario Alfonsi
Located in Milan, IT
This chair is based on the prototypes of foldable seats created in the 19th century by J.B. Fenby, who was himself inspired by traditional Berber chairs. The Tripolina is a durable c...
Category

H 41.34 in. W 29.53 in. D 27.56 in.
Kirk Cognac Leather Armchair
By Trabà
Located in Milan, IT
Exquisite clean and essential lines mark this elegant armchair upholstered in Fine cognac leather. Classic and modern at the same time, this armchair will add a refined accent to any...
Category

H 24.41 in. W 31.5 in. D 25.99 in.
Danish Armchair in Cognac Leather
Located in Waalwijk, NL
Armchair, walnut and oak, Denmark, 1950s. This lounge chair in oak presents an open arm frame. The lounge chair is upholstered in cognac fabric which shows a subtle patina. This des...
Category

H 30.32 in. W 27.17 in. D 28.35 in.
Cognac Leather and Blackened Steel Armchair
By Stephen Kenn
Located in Los Angeles, CA
The Inheritance Armchair by Stephen Kenn is as comfortable as it is unique. The design features an exposed construction composed of three elements - a steel frame, plush upholstery, ...
Category

H 31.89 in. W 24.02 in. D 20.48 in.
Italian Pair of Architectural Armchairs in Cognac Leather
Located in Waalwijk, NL
Pair of dining chairs, beech, cognac leather, Italy, 1960s Pair of Italian dining chairs with a characteristic beechwood frame. The frame consists of beechwood slats. One of them ...
Category

H 27.56 in. W 23.43 in. D 20.48 in.
"Repose" Contemporary Armchair Cognac Saddle Black Rubbered Metal Frame
By Jover + Valls
Located in Alcoy, Alicante
The “Repose” contemporary armchair belongs to a collection that revisit the director chair collection, serene pieces where exclusivity and precision are shown in small details such a...
Category

H 29.53 in. W 27.17 in. D 31.5 in.
Modern Armchairs in Cognac Leather by Walter Knoll, 1970s
By Knoll
Located in Almelo, NL
Large set/16 modern armchairs, in covered in cognac leather by Walter Knoll Germany 1970s. These armchairs-conference chairs will contribute to a luxurious character of the interior ...
Category

H 40.95 in. W 29.53 in. D 35.44 in.
Bauhaus Era Minimalist Modernist Cognac Saddle Leather Lounge Chair Armchair
Located in Munich, Bavaria
A very rare german modernist armchair lounge chair. The Chair is something in between a lounge chair and an armchair. Minimalistic architectural and pure material design. The desi...
Category

H 28 in. W 22 in. D 20 in.
Joan Pou Pair of Spanish Armchairs in Pine and Cognac Leather
Located in Waalwijk, NL
Joan Pou, armchairs, pine, leather, Spain, 1960s This set of armchairs from Spain is strict, purist and belongs to the rationalist movement in Spain. The chairs feature an archite...
Category

H 34.45 in. W 29.53 in. D 38.59 in.
Pair of Armchairs in Cognac Suede Leather by Carlo Ratti , Fully Restored
By Carlo Ratti
Located in Rome, IT
1950s Italian '' Boomerang '' armchairs by Carlo Ratti , This pair of chairs with armrests has an ultra light and modern design, but at the same time it is solid and comfortable. ...
Category

H 30.71 in. W 21.66 in. D 20.08 in.
Wilkhahn Chair in Padded Cognac Leather, 1970s
By Wilkhahn
Located in AMSTERDAM, NL
Soft pad chairs in Cognac leather for Wilkhahn designed by Delta Design in 1968. Aluminum polished swivel base with fiberglass seat shell. The chairs are in good original condition w...
Category

H 31.5 in. W 22.45 in. D 22.84 in.
Set of Four Brutalist Spanish Biosca Chairs in Cognac Leather
By BIOSCA
Located in Waalwijk, NL
Biosca, set of four chairs, leather, pine, Spain, 1950s Sturdy chairs manufactured by the Spanish Biosca. These chairs are made out of pine and have stunning, cognac leather seat...
Category

H 30.71 in. W 23.04 in. D 20.48 in.
Pair of Danish Midcentury Side Chairs in Ash and Cognac Leather, 1960s
By Ditte & Adrian Heath
Located in Lejre, DK
Pair of side chairs in ash, cane and patinated leather. Designed by Ditte & Adrian Heath for Søren Horn cabinetmakers. Made in Denmark in the 1960s. Great original condition.
Category

Pair of Danish Midcentury Side Chairs in Ash and Cognac Leather, 1960s

H 26.78 in. W 31.89 in. D 23.23 in.
Danish Design and Midcentury Style Wooden Cognac Leather and Fabric Chair
Located in Tourcoing, FR
Wooden structure and graphic fabric adorned with a cognac pillows chair in a midcentury style and Scandinavian design.
Category

H 27.17 in. W 41.74 in. D 41.74 in.
Mid-Century Modern, Arm Chair in Wood and Patinated Cognac Leather, 1950
By Josef Frank, Anna-Lülja Praun
Located in Hausmannstätten, AT
A spindle back armchair designed by Anna-Luelja Praun (1906-2004), Vienna, Austria, manufactured in midcentury, circa 1952. It is made of a warm toned solid wood frame with two loose...
Category

H 31.5 in. W 27.56 in. D 19.69 in.
Danish Armchair in Cognac Leather
Located in Waalwijk, NL
Armchair, walnut and oak, Denmark, 1950s This lounge chair in oak presents an open-arm frame. The lounge chair is upholstered in cognac fabric which shows a subtle patina. This desi...
Category

H 29.53 in. W 23.63 in. D 27.56 in.
Armchair, Patinated Cognac Leather Wood, Austria, 1950s
Located in Hausmannstätten, AT
An armchair manufactured in midcentury in Austria, circa 1950. The piece is made of a wooden base with an upholstery in leather with great patina. Patinated brass studs at the back....
Category

H 36.62 in. W 24.41 in. D 27.96 in.
Art Deco Vintage Brown-Cognac Leather Club Armchair
Located in Darmstadt, DE
This club armchair, is covered with hand-patinated sheep leather. The armchairs have a very nice Art Deco shape. The leather is very sturdy and it is very comfortable to sit.
Category

H 37.41 in. W 35.44 in. D 34.26 in.
Borge Mogensen Spanish Dining Armchair, Model 3237, Cognac
By Fredericia, Børge Mogensen
Located in Berkeley, CA
The Spanish dining chair is a testament to the application of honest materials. Crafted from the finest selection of oak and flawless saddle leather, the chair is available with or w...
Category

H 24.81 in. W 53.55 in. D 41.34 in.
Vintage Italy Cognac Vegetal Leather Dining Chair Armchair Cantilever
Located in Munich, Bavaria
This Cantilever vintage chair are an Italian classic. In the manner of Marcel Breuer this chairs are strongly inspired by the Bauhaus Movement. It is the thick saddle vegetal tanne...
Category

H 31.5 in. W 22.45 in. D 22.05 in.
Vintage Brazilian Armchair with Cognac Color Leather Seat Cushion, 70s
Located in Oostrum-Venray, NL
Very beautiful and special lounge chair attributed to Brazil 1970. The chair is made of curved brown plywood and has a cow leather seat supported by a firm back and with brown lea...
Category

Cognac Armchair For Sale on 1stDibs

At 1stDibs, there are many versions of the ideal cognac armchair for your home. A cognac armchair — often made from animal skin, leather and wood — can elevate any home. There are 211 variations of the antique or vintage cognac armchair you’re looking for, while we also have 15 modern editions of this piece to choose from as well. You’ve searched high and low for the perfect cognac armchair — we have versions that date back to the 18th Century alongside those produced as recently as the 21st Century are available. Each cognac armchair bearing Mid-Century Modern, Scandinavian Modern or Modern hallmarks is very popular. De Sede, Børge Mogensen and Arne Norell each produced at least one beautiful cognac armchair that is worth considering.

How Much is a Cognac Armchair?